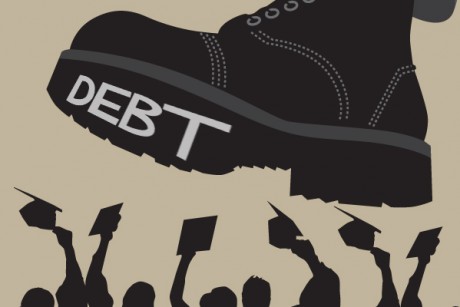 This month Child Poverty Action Group launched their investigative report “Laybying Our Future: The State of Student Hardship in New Zealand”. CPAG is an independent advocacy group that focuses on research and education, promoting policy changes and raising awareness of the causes, consequences and solutions to child poverty. They commissioned a report by Max Lin, a student at Auckland University, which demystifies the problem and makes several suggestions for alleviating it. CPAG’s position is that, while their focus is usually on children under the age of 18, children are further disadvantaged in tertiary education through the cycle of poverty, as are children whose parents are struggling students.

To quote the report: “The issue of student debt is often cited as a deterrent, but perhaps a greater barrier to tertiary education is the immediate financial hardship while undertaking study.” Most students would agree that the only way to stay sane is to defer thinking about your huge debt until after graduating.

This to me is the crux of the report, and a point sorely missed by many media outlets, including Radio New Zealand, who published an item on 3 August titled “Rethink interest-free student loans, says poverty action group”, choosing to highlight, out of context, one short paragraph in the 28-page report. I agree it’s an unfortunate recommendation, it nevertheless didn’t warrant this much attention at the expense of numerous excellent suggestions in the report, such as unfreezing the parental income threshold and increasing the eligibility and amount of student allowances. The report also acknowledges that these are “Band-Aids to a bigger problem” that “cannot be solved by targeting tertiary education in isolation”.

The comprehensive findings of the report include research into student fees, loans and allowances over the past 30 years, the rising cost of housing and students’ sometimes tragic solutions to this, a breakdown of living costs in different cities, the cost to mental and physical health, the effects of working while studying. It illustrates these with several case studies. Those who fall through the cracks because of the unfair parental income threshold are not just a tiny minority. But the report found that even for those students who are eligible, the student allowance is insufficient to live on, especially in Auckland. Notably, the number of students accessing student allowance have declined by around 20,000 in the past five years. Many students have to work while studying to an extent that impacts on their ability to study. Another problem is that parents who study miss out on In Work Tax Credits. The report also notes that the true extent of the problem may be bigger, as the worst hit students are likely locked out of completing their degrees altogether and have fallen off the radar.

I was invited to speak on the panel at the launch of this report on 3 August, as a student and parent, alongside Linsey Higgins from NZUSA, Labour MP Jenny Salesa, Green MP Gareth Hughes, and chaired by student Jordan Margetts, editor of Craccum in 2015. The Auckland University case room was full, as Lin summarised the key findings of the report, followed by a short talk from each panel guest and then a vigorous discussion.

The attentive audience asked some hard questions, and squeezed out of Labour and Greens an admission of oversight in Labour’s proposed ‘free tertiary’ policy, which fails to address the lack of a student allowance for postgraduate study, a factor that further widens the economic gap. The only option is to add living costs to your loan, but the maximum you can borrow is $176 a week, which a monk couldn’t survive on in Auckland, meaning students are forced to work while studying fulltime, or fit part-time study around their work. The question becomes one not just of access, but also of the quality of the education. Mental health services at Auckland University currently can’t keep up with demand. The report also found that 90% of students have some secondary form of debt, such as overdraft, credit card or personal loan, to keep on top of living costs.

A question from a student in the audience: “How would the government pay for it?” was a welcome opportunity for me to challenge the received wisdom that there’s a shortage of money and we all have to tighten our belts. I suggested tightening the belts of the mega rich, whose taxes were slashed at precisely the time that tertiary fees were introduced; a financial transactions tax alone would pay for it. Lin also noted the obsession of governments with having to “balance their budgets” when deficit spending should be considered if it is a worthwhile investment. The issue is not simply financial, it is one of priorities and whether there is the political will for change.

A good suggestion arose from the audience: rather than wait for the possibility of a Labour government while the situation worsens, why not introduce a member’s bill with some of the recommendations from the report? Nor does Labour’s free tertiary policy address the fundamental problem of immediate student hardship. Jenny Salesa did say that she would discuss this possibility with Chris Hipkins.

Making tertiary education expensive is likely to result in the pursuit of high salaries over socially beneficial professions, and an overall drop in education in the population. In terms of the benefits to society of accessible tertiary education, the report points out that an educated workforce is better able to adapt to the rapid changes in market conditions caused by globalisation and new technology, and that tertiary graduates contribute more to the tax base over their lifetimes. Other measurable benefits to society are the equalising effects of education, promoting fairness and contributing to “an active and informed democracy”, with graduates being more politically engaged and more likely to vote.