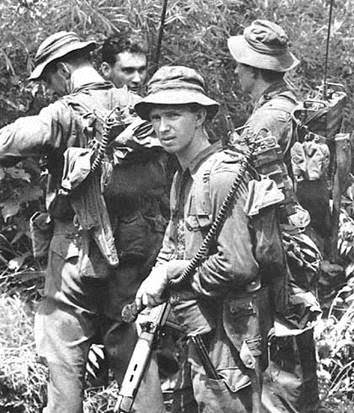 PHUOC TUY PROVINCE, VIETNAM, 18 AUGUST 1966. For a period of 48 hours, around one hundred soldiers from D-Company, Royal Australian Regiment, risked annihilation at the hands of a much larger force of Vietnamese guerrillas. Had it not been for the deadly artillery shells dropped upon the Vietnamese positions by Australian and New Zealand gunners, and the crucial air support supplied by the Royal Australian, and the United States’, air forces, the first serious engagement involving Australian and New Zealand forces in the Vietnam War could have ended in disaster. As it was, the 18 Australian soldiers killed in and around the Long Tan rubber plantation on 18 August 1966 only served to deepen the domestic divide between supporters and opponents of Australian participation in the Vietnam conflict.

Quite why the New Zealand Government has decided to “celebrate” the Battle of Long Tan which (the participation of Kiwi artillerymen notwithstanding) was an overwhelmingly Australian engagement, remains something of a mystery. Perhaps it’s because Long Tan represents one of the few examples of Australian and New Zealand soldiers engaging the People’s Army of Vietnam (also known as the Viet-Cong) more-or-less independently. As such, it makes it easier to represent the Vietnam War as just another of the many conflicts in which New Zealanders have fought, and its veterans as essentially no different from the participants in all our other wars.

Except, of course, that the Vietnam War was very far from being ‘just another’ war. It was the largest and the most destructive of a series of military conflicts waged to prevent the “spread of communism” in South East Asia.

That the people of Vietnam were fighting for their national independence every bit as much as they were fighting for communism cut little ice in Washington, Canberra and Wellington. The nations of the so-called “Free World” were convinced that the slightest sign of weakness in the face of national liberation struggles backed by the Soviet Union and/or the People’s Republic of China would only result in more and more of the world’s newly independent nations denying their markets to capitalist exploitation. To prevent that from happening the United States was willing to hurl at the unfortunate Vietnamese people all the non-nuclear weaponry it possessed. Millions were killed.

Vietnam was an unjust, ideologically-driven war of aggression against a nation of peasant rice-farmers, and the revulsion it created – especially among the young – gave rise to an international anti-war movement of extraordinary intensity. In attempting to defeat the Vietnamese, the US armed forces committed appalling atrocities and the US Government revealed to the world America’s ugliest features. Eventually, the American people, along with the people of Australia and New Zealand, refused to back the war. With the withdrawal of American military support, the US puppet government of “South Vietnam” collapsed. By 1975 Vietnam had, at enormous cost, finally freed itself from the clutches of western imperialism.

New Zealand’s participation in the Vietnam War, no matter how marginal, represented a shameful capitulation to American pressure. It was an immoral war which we should never have joined, and the idea of “celebrating” its fiftieth anniversary should be repugnant to all thinking New Zealanders. Those who participated in the fighting for reasons of “adventure”, or on account of the “big money” offered, were a far cry from the conscript soldiers of the First and Second World Wars. Their participation in the conflict did, however, leave many of them physically and psychologically scarred. For that they deserve our pity, but not our respect. The cause they were fighting for was not a good one. It should be remembered only as a lesson in the perils of participating in imperialist aggression.