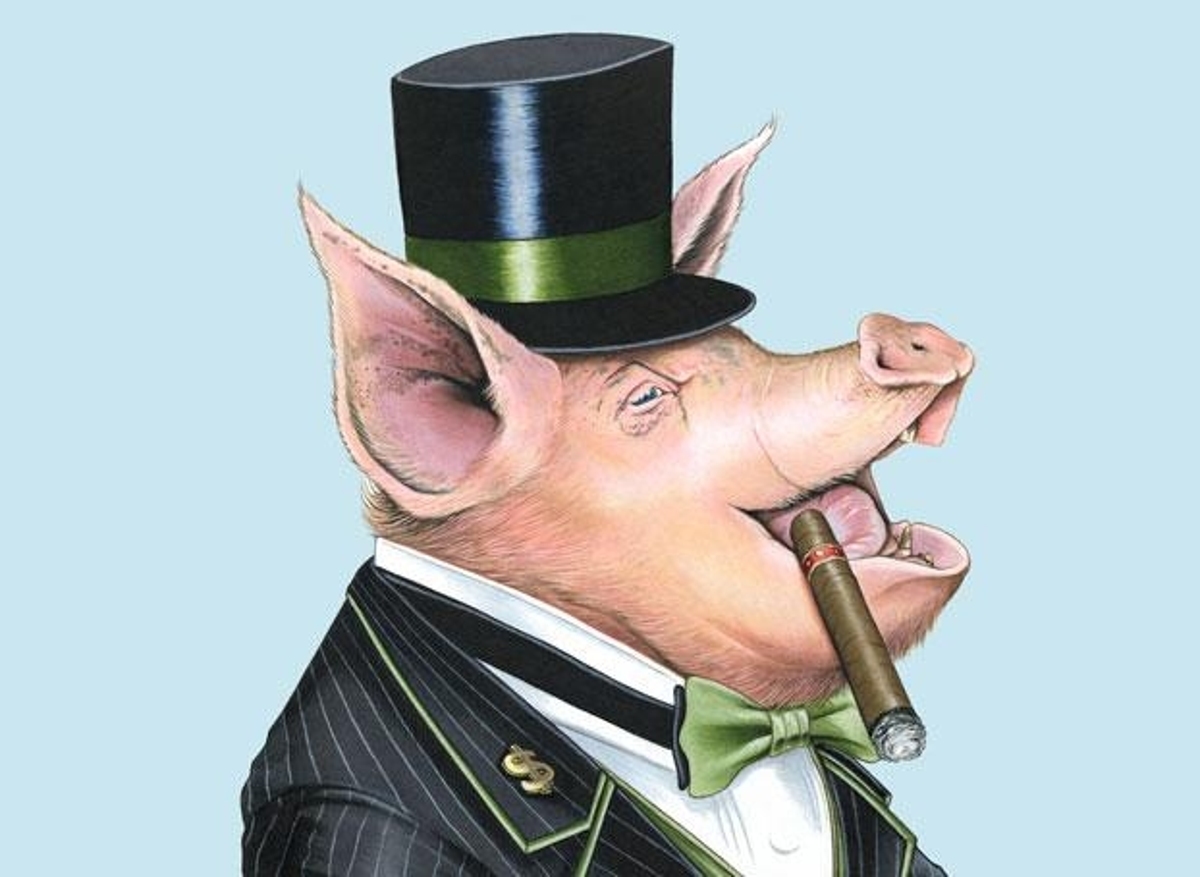 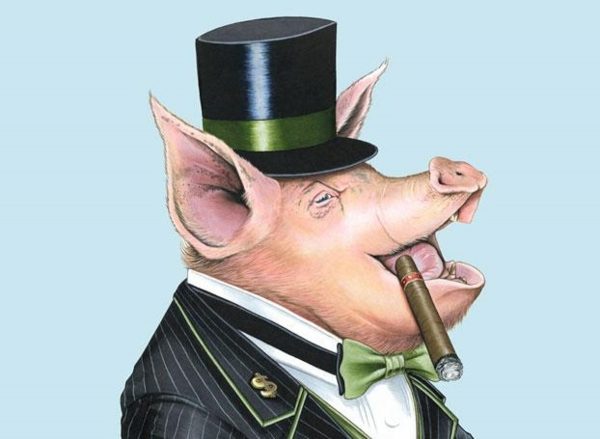 The New Zealand and Australian banking system is owned and controlled by a criminal conspiracy whose sole purpose is to gouge the community for the enrichment of a small class of ultra-wealthy individuals.

New Zealand’s “Big Four” main banks – the BNZ, ANZ, Westpac and ASB – are in turn owned by the Big Four Australian banks – NAB, CBA, ANZ and Westpac. They have between them 90% all mortgages and gross loans and advances in New Zealand and 80% in Australia.

The main shareholders of all four Australian banks are the same top four financial investment groups – HSBC Custody Nominees; JP Morgan Nominees; National Nominees; and Citicorp nominees. Each nominee group represents big money investors who we are not permitted to know anything about.

But we do know that three of the four are from banking groups that have repeatedly been charged with illegal and corrupt practices including money laundering for drug cartels and terrorists, price fixing in relation to interest rates, being the banks of dictators, arms traders dealers of blood diamonds, environmental vandals and tax evasion on an industrial scale. 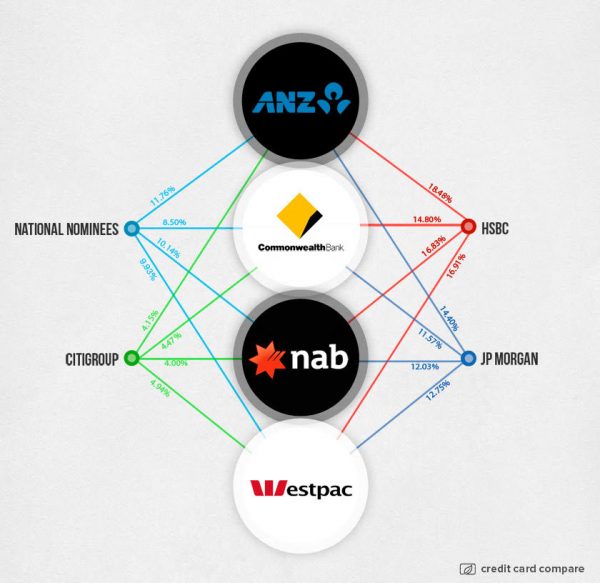 HSBC, the biggest shareholder in each of the Big Four, is the bank with the most public criminal record. See:

Gangster Bankers: Too Big to Jail – How HSBC hooked up with drug traffickers and terrorists. And got away with it

In return for admitting the charges and paying a $US1.92 billion fine no one from HSBC was actually prosecuted for the criminal activity. That may sound like a lot of money but the US Comptroller of the currency estimated that HSBC had potentially $60 trillion in illegal transactions in 2010 alone! The fine equalled about three weeks of annual profit.

HSBC Custody Nominees holds investments across the Australian economy. “As a wholly owned subsidiary of HSBC Bank Australia Limited, the custody nominees business held more than $700 billion in assets. It is not only in the big four. The sheer size of its investment capital means that it frequently shows up among the top 5 shareholders for a large number of Australian companies. In fact, HSBC, JP Morgan, National Nominees and Citicorp all frequently show up together among the top 5 or top 10 shareholders. They simply represent a very large pile of money, all of which has to be parked somewhere.” (Who Really Owns the Big Four)

The other two main owners of the Big Four – J P Morgan and Citicorp – have also been fined again recently for being part of a conspiracy of major banks that rigged the benchmark interest rate that sets rates across the global financial system. They actually called their online chat room where they did the fixing “The Cartel”. See:

Goldman Sachs, Morgan Stanley, Bank of America, JP Morgan Chase, Citigroup and more have been charged on numerous occasions with fraud. But invariably the charges are civil, not criminal. The banks pay a fine and promise to “never do it again.” A 2011 analysis of such cases showed just what those promises were worth. Over 15 years, there were at least 51 cases in which 19 Wall Street firms had broken the same antifraud laws they had agreed never again to violate. A New York Times Interactive has a catalogue of cases dating back to 1985.

They are four of the five largest Australian companies by market capitalisation, together representing more than a quarter of the market. According to a 2012 report by the International

Monetary Fund [PDF], the big four controlled 88% of residential mortgages and 80% of deposits. By contrast, the biggest six American banks held 30% of total deposits in 2013.

It’s not just banking: the big four own 53% of life insurance premiums, and account for 57.3% of retail investment funds through bank-owned platforms.

The Australian Institute makes the following observation about the pattern of bank ownership in Australia.

“An inspection of the top 20 shareholders in the big four banks reveals a very interesting pattern. On average, over 53 per cent of each big bank is owned by shareholders that are among the top 20 shareholders in all the big banks. Most of the owners, and certainly the top four shareholders, are nominee companies. Nominee companies hold shares on behalf of other entities that for some reason want to hide their identity. They tend to be both foreign investors and fund managers; increasingly they are investors acting on behalf of superannuation funds.

“The common ownership of the big four banks seriously challenges the idea that there are four separate big banks in Australia. Given the common ownership of the big banks, it is to be expected that the owners will put pressure on the banks to act as one and reap the monopoly profits. That seems to have been the motive of the investors who encouraged the NAB to move back in line with its competitors. Moreover, ownership figures for the second tier banks, the big three regionals, show they are also owned by the same organisations that own the big four.”

They are also hugely profitable. Banking profits in Australia at 2.9% of gross domestic product makes them the most profitable banks in the world in relation to the economy.

Profits in New Zealand for the four in 2015 totalled $4.6 billion – $1000 for every man, woman and child in the country. The profit rate is even higher than in Australia.

In 1937 Australia had a Royal Commission into the banks following deep public antagonism to their perceived role in helping deepen the 1930s Great Depression. The report’s recommendations tried to increase public influence over monetary policy and the scale and character of credit. This was all abandoned in the 1980s all over the world during the deregulatory fervour. Reckless bank behaviour was again a factor in unleashing the financial crises of 2008 and the long depression that has followed.

One of the members of the royal commission, a certain ex-engine driver called Ben Chifley, had stronger views on what needed to be done that remains valid for today when banking and criminal behaviour seem to go hand in hand. He wrote:

Banking differs from any other form of business because any action — good or bad — by a banking system affects almost every phase of national life. A banking policy should have one aim – service for the general good of the community. The making of profit is not necessary to such a policy. In my opinion, the best service to the community can be given only by a banking system from which the profit motive is absent and, thus, in practice only by a system entirely under national control.