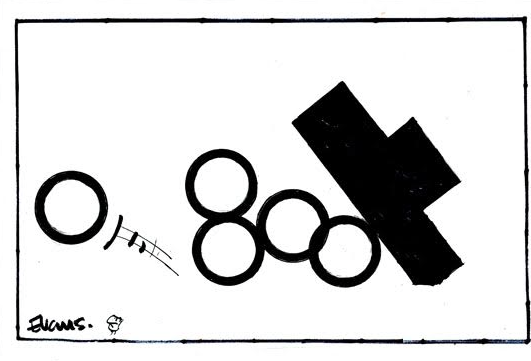 I don’t really care that we lost the 7s.

Congrats to the Seven Sisters for winning silver (not losing gold as it has been reported).

But to be honest, I am over the Olympics. Not just this one. All of them.

I remember watching the Olympics at school on crisp dark early mornings. That sense of pride as our teams marched out and competed against countries you rarely ever saw any other time. The excitement, the watered down milo, the standing and singing the anthem if we won. It was like a young nat training camp.

With Russia mass cheating, and the violence netted out to the local population  who protested and the grotesque pollution it’s all causing – this Olympics seems more damaged than ever before.

The ridiculous increase in nonsense sports that have been added (handball, come on – handball?) makes a mockery of the concept of excellence.

At this rate, Pokemon Go is likely to be in the next Olympics.

This Olympics takes place during the immersion and explosion of social media so rather than a focus on the excellence, we have inane look-a-like competitions, side love stories, agonising injuries, parents well wishes, photos of people crying when they don’t win, etc, etc, etc.

It’s almost as if the results and wins are the least important part of the Olympics, which is ridiculous because the Olympics are supposed to be about excellence in a narrow field of human physical ability. Who can run the fastest, jump the furthest, throw the longest, lift the most, bounce across a room with ease, swim the fastest – these are the measures of physical and individual excellence. All the human interest garbage is a soap opera for the bored  and privileged masses.

I hate to be the killjoy here but the planet is melting, major democracies are being ripped apart by inequality and the plutocracy only grows ever more larger. A corrupt sporting event that succeeds only in devouring attention by broadening the range of Sports down to tiddlywinks doesn’t deserve the attention it feasts upon.