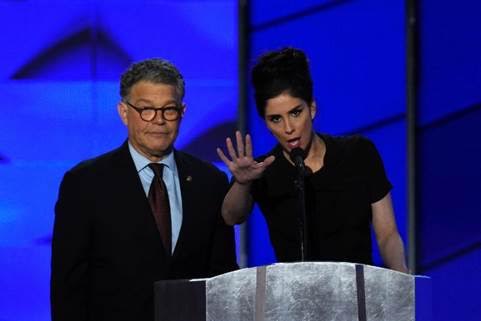 “YOU’RE BEING RIDICULOUS!” On Monday night, the comedian Sarah Silverman (a Bernie Sanders supporter) called her erstwhile comrades to order. She was right to do so. All that the disruptive behaviour of the “Bernie or Bust” delegates to the Democratic National Convention was demonstrating to the world was how little they understood democratic (and Democratic Party) politics.

Ironically, Hillary won by adopting the same tactics by which she, herself, had been beaten in 2008. By taking full advantage of the Democratic Party’s proportional system of allocating delegates, Barack Obama had similarly used Super Tuesday to build up a massive buffer of pledged delegates. In just about all the subsequent primary fights the results were bound to be relatively close. Simply, there were no other opportunities for an opponent to win by margins of 50-60 percentage points. The big buffer of pledged delegates won early by both Obama and Clinton was absolutely critical to their eventual success.

There were some in Bernie’s camp who warned him about the dangers of Super Tuesday and urged him to stake his claim to African-American votes early and often. They were over-ruled. Sanders’ pitch for the Black Vote was too little and it came too late.

Two-thirds of the way through the primary season Bernie understood that the nomination was lost. What he also understood, however, was that the nomination wasn’t the only prize he and his followers were playing for. “Political Revolutions” are bigger than individuals. At their core are a set of principles which, in turn, spawn a set of policies. This was the battle that Bernie won. As he told the Convention: “This is the most progressive platform in the history of the Democratic Party!” Yes, he endorsed Hillary, but in doing so he took care to bind her to that progressive platform with chains of rhetorical steel.

Hillary’s people will have noted the wild applause that followed Bernie’s ad-lib warning against any attempt to ratify the TPP during the so-called “Lame Duck” sessions of Congress. The prospect of walking-back Hillary’s pledge to oppose the TPP suddenly shifted from ‘damned difficult’ to ‘well-nigh impossible’.

But still the dead-enders refuse to accept the fact of Hillary’s nomination. They boo any mention of her name; the turn their backs on her supporters; they threaten to thwart the confirmation of Tim Kaine, her Vice-Presidential running-mate; they make a nuisance of themselves in front of the media benches.

There’s nothing democratic about this behaviour – in fact, it represents the antithesis of democracy. The “Bernie or Bust” people are simply unwilling to accept the fact that in primary after primary more Democratic Party supporters voted for Hillary than voted for Bernie. By refusing to accept the result, they are demanding, arrogantly, that their votes for Bernie should count for more than the votes cast for Hillary. That, somehow, the democratic verdict of the primary process (a far more democratic method of determining who should lead the country than anything we have in New Zealand) should be set aside.

That makes the “Bernie or Bust” crowd something much more than ridiculous, Sarah, it makes them dangerous.