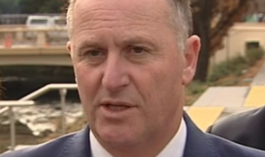 When news of the kidnapping of Australians and a New Zealand citizen in Nigeria hit our headlines, our esteemed Dear Leader’s response was unequivocal;

“Our very strong policy is not to pay a ransom and our reason for that is we think if we paid a ransom, we’d potentially put a bounty on any New Zealander’s head who travels to a dangerous part of the world, and it potentially makes the situation worse.”

Our Leader was not for turning. Key does not cave in to pressures.

In October 2010, the country was “rocked” with news that that  the Hobbit movies would be “taken away” from New Zealand;

Jackson’s company, Wingnut Films, said in a statement that Warners representatives were coming to New Zealand next week “to make arrangements to move the production offshore” because “they are now, quite rightly, very concerned about the security of their investment.”

A week after Peter Jackson’s dire warnings of impending Mordor-like doom, Dear Leader Key intervened and rode like a Ranger to the rescue (in a BMW limousine, not a stallion);

Even the Warner Bros movie execs had   limos provided (at taxpayers’ expense, yet again) when they came-a-visitin’ to New Zealand to collect their $34 million bucks;

Along with $34 million of taxpayer’s money paid over to Warner Bros, the National government passed legislation changing the status of Jackson’s workers from employees, to “contractors”. This lessened the working-conditions of people working throughout New Zealand’s movie industry.

The employment law changes passed through Parliament within forty eight hours – a feat unheard of in New Zealand’s political process. Unions, workers, and the public had no say in the matter.

As Key said at the time,

“It was a commercial reality that without this [law] change, these movies would not be made in New Zealand.”

So the sovereignty of New Zealand’s Parliament was not ransomed by Warner Bros to gain $34 million plus a change in our labour laws?

Note: On 21 December 2010, two months after Jackson declared that there was an imminent threat to losing The Hobbit to another country, he conceded that no such “threat” existed;

Instead, it has gone back into negotiations with electricity supplier Meridian to try and get a better deal.

In February 2014, National conceded to Rio Tinto’s demands that it’s electricity subsidies be increased. A further ‘sweetener’ of $30 million of taxpayer’s money was paid over to the smelting multi-national;

As Key said at the time;

This was echoed by Finance Minister, Bill English;

“The $30m was a ‘one-off incentive payment’ to help secure agreement on the revised contract because of the importance of the smelter to the stability of the New Zealand electricity market.”

So the jobs of eight hundred jobs in Southland were not ransomed by Rio Tinto to gain $30 million plus cheaper electricity rates?

John Key says his government will not pay ransom to extortionists?

The Mendacities of Mr Key #9: The Sky’s the limit with taxpayer subsidies!

The Mendacities of Mr Key # 16: No one deserves a free tertiary education (except my mates and me)

The Corporate Welfare of Tiwai Point – An exercise in National’s “prudent fiscal management”?