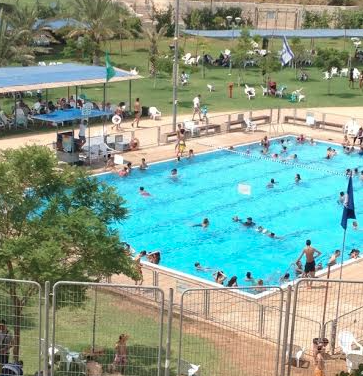 Many, far too many, tourists to Israel spend their whole time in a ‘tourist bubble’.  They never meet Palestinians; they have no idea about what is really taking place. They miss so much. It is much more interesting, and revealing to visit that part of the world as an ‘alternative tourist’. We ourselves, Martin and I, have been on 3 ICAHD (Israeli Committee Against House Demolitions)  tours, and one JAI, Joint Advocacy Initiative , olive picking tour, over a period of 4 consecutive years. Each time we combined the organised tour with some private touring, learning more as well as making friends. Palestinians welcome contact with people from the outside world. An ICAHD tour is in fact a life-changing experience.

It didn’t take us long to realise that an important aspect of the reality of the harshness of the oppression imposed on Palestinians is the situation of water.

Yes, water! Water, essential to life, a human right as recognized by the United Nations.

All water supplies are controlled by the Israelis, including West Bank  mountain aquifer water which by international law should be a Palestinian resource. Practising ‘hydrological apartheid’ , control of water is used as weapon to drive Palestinians off the land, and if not to another country then into squeezed isolated miserable ‘bantustans’.

Israeli ‘settlers’ have pipe-delivered water. Palestinians do not. They  have to buy  water, from Mekorot, Israel’s state-owned water company, and it is expensive for them. You can recognize a Palestinian village by the black water-collecting tanks on rooftops.

Israel and the Occupied Territories are experiencing a heat wave, with daily highs  around 38 deg  Celsius. That is hot!

Entire Palestinian communities in the West Bank either have no access to water or have had their water supply reduced almost by half.  Mekorot has the power to determine how much water should be made available to Palestinian committees. ‘Settler’ , meaning Jewish only, communities have no such restrictions and are able to maintain their comfortable life-style including access to swimming pools.  Oh yes. Olympic size swimming pools, thanks to West Bank aquifers. Note the photo of an Ma’ale Adumin pool. Ma’ale Adumin is  a large settlement, meaning for Jews only, east of Jerusalem. East of Jerusalem means desert country. West Bank Palestinian and east Jerusalem Palesinians  do not have swimming pools , and are barricaded from access to the Mediterranean.

Our tour van drove us around Ma’ale Adumim so we could have a look. We then went to a Palestinian Jordan valley farming community, physically near to the settlement, but it felt like another planet.  There is an agenda to drive Palestinian farmers out of the Jordan valley by  starving them of water. The Palestinians are restricted to how deep their cisterns can be dug. But the Israelis can dig deeper and deny the Palestinians access to aquifer water.

Al Araqib is a community of Bedouin who live in the Negev region of Israel.  The people of  Al Araqib are Israeli citizens. They  live where their ancestors lived long before Israel even existed. They paid taxes, to the Ottomans, and  to the Mandate Government . But the Israeli Government has declared Al Araqib and many other Bedouin communities to be ‘unrecognized’. An ‘unrecognized village’ appears on no maps, receives no amenities , that is, no school or clinic, no piped water. Furthermore if the people refuse to leave, their village is demolished. When we visited Al Araqib it had been demolished, as I recall, for the 6th time. Each time the people rebuild, practicing ‘sumud’ , steadfastness. The Israeli agenda is to exile the Bedouin, traditional herdsmen , into overcrowded crime-ridden townships, and replace the Bedouin communities with Jewish-only communities with services including of course piped water.

For our  last visit to that part of the world , we decided to take part in an  olive harvesting project. The farmers we helped own olive groves in the ‘seam’, that is land on the Israeli side of the Wall but within the so-called ‘Green Line’. The farmers still own the land and the olives but they can only access their own land with IDF approval. So their time to work the land is limited. They appreciate help from ‘internationals’. The farmers own their small property but they don’t own the water underneath it. Walking down to the olive orchards, we passed a fenced, locked  water pump. It was pumping water from under the Palestinian owned land and piping it to a settlement. Stealing water!

We haven’t been to Gaza. But we try to keep up  with the situation there. It doesn’t take much reading to learn that Gaza , predicted to be uninhabitable in the near future, is in a very very dire situation.

Aquifer water that should reach Gaza is extracted by Israelis. The tap water that is available is undrinkable, thanks to Israeli bombing and to the Israeli and Egyptian cruel siege. The UN reports that Gaza will be uninhabitable by 2020 but one can’t help but suspect that it is close to that position now. Isn’t creating a condition of being ‘uninhabitable’ a euphemism for genocide? That the West looks the other way is a shocking indictment of their lack of humanity. Water means life and clean water means health.

There is so much that could be said. We have friends near Nazareth  who took us  to a hill over-looking the National Water Carrier which delivers water from the Sea of Galilee down the length of Israel. Fred Pearce in his book When the Rivers Run Dry describes how Israel ‘hijacked the River Jordan” in 1964. Pearce describes the Six Day War as the “first modern water war.”

Richard Falk , a former UN Rapporteur for Palestinian right spoke in New Zealand year and a half ago. He finished his talk by remarking that the Middle East is in danger of a humanitarian crisis because of climate change. It is essential that Israel end its oppression of the Palestinians,  and face the reality that they, together, recognizing  their common humanity, must strive  to face the challenges brought by climate change.