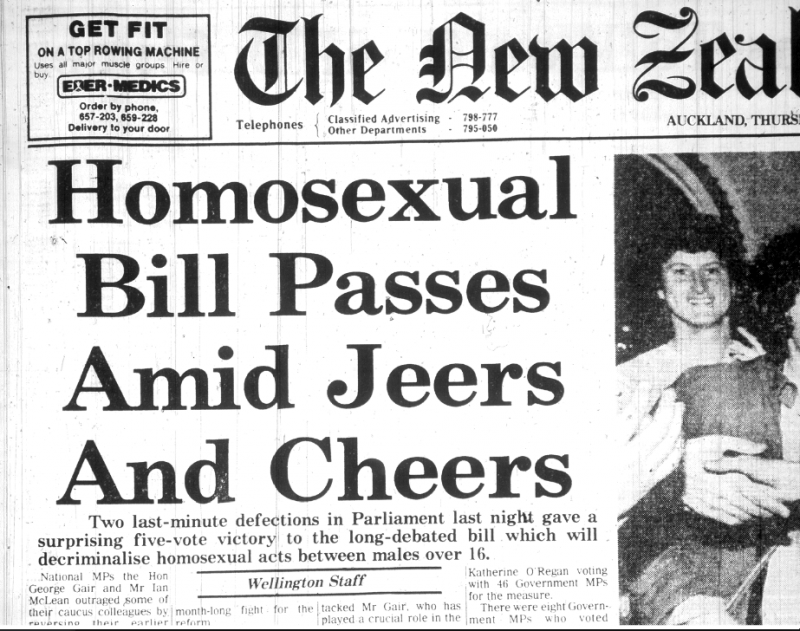 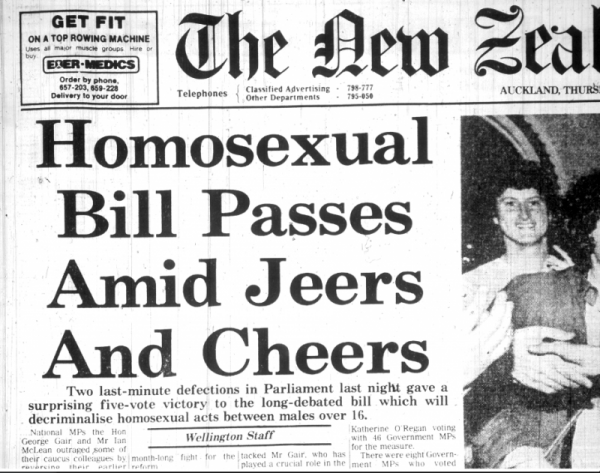 On 9 July 2016 we will commemorate the 30th anniversary of the passing of legislation sponsored by Hon Fran Wilde that removed criminal sanctions against consensual homosexual conduct between males. This law reform began with the Dorian Society in 1962 and the Wolfenden Association that campaigned for the decriminalisation of male homosexuality. It took several Parliamentary attempts at decriminalisation, beginning with National MP Venn Young’s Crimes Amendment Bill in 1974, and two attempts by Labour MP Warren Freer in 1979 and 1980 before Fran collaborated with gay activist groups to end discrimination and achieve homosexual law reform in 1986.

It was a long, hard fight and it often feels that this fight for equality for all LGBTI human beings might never end. But it is a fight built on a solid base of fundamental human rights – rights of equality and non discrimination – and democratic principles of equal citizenship. The state cannot discriminate against any citizen and we continue to hold our government accountable to such principles.

It is from this base of human rights principles that I am committed to being an active participant in assisted dying law reform. Fundamental human rights are both collective and individual and our recognition and ratification of the United Nations International Convention on Civil and Political Rights protects an individual’s freedom and ensures their ability to participate in the civil and political life of our society without discrimination or repression.

The euthanasia or death with dignity or end of life choice or assisted dying debate in New Zealand began in 1978 when members of the NZ Humanists Association and the Rationalists formed the Auckland Voluntary Euthanasia Society. Law reform measures began in 1995 with NZ First MP Michael Laws Death with Dignity Bill which was unsuccessful, as was NZ First MP Peter Brown’s 2003 Death with Dignity Bill. In 2013 Maryan Street submitted an End of Life Choice Bill and currently David Seymour has an End of Life Choice Bill in the members ballot.

The public debate was highlighted last year when Wellington lawyer Lecretia Seales made an application to allow her doctor to help end her life without facing prosecution and that application was refused by the High Court. Soon after the decision was released Lecretia died of a brain tumour at the age of 42.

While the Court sympathised with Ms Seales’ situation, the decision was clear that the Court could not make that decision and only Parliament could make a law change that would provide for assisted dying.

The authorization of assisted dying is firmly back in Parliament’s court. The decision is clear that it is Parliament’s responsibility to uphold an individual’s personal right to ask for their doctor’s help to die at a time of their own choosing when faced with a terminal illness and after exhausting all treatments that would allow them to continue living.

Human rights principles and ethical principles of informed consent and ‘do no harm’ are processes that we could be looking at to guide decisions around approval for assisted dying. It is the State’s responsibility to authorise an assisted dying process, not the judiciary or our medical professionals.

2018 will signify the 40 year anniversary of the beginnings in this country of seeking law reform for assisted dying. I hope by that anniversary that we, as a nation committed to human rights principles, can be counted amongst the growing number of nations that allow our citizens the choice to die with dignity at the end of their lives in a state authorised assisted dying process.