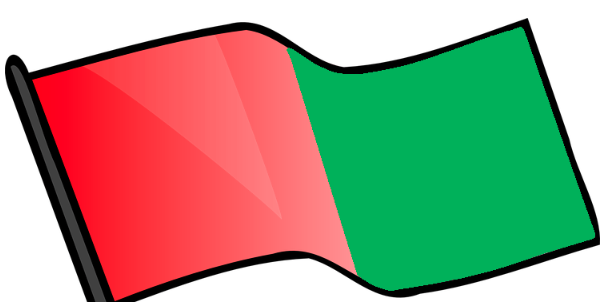 May 31st was the day that many in the Labour and Green parties had so earnestly wanted to see – a formal declaration between the leadership of their respective parties for greater co-operation to remove National from power. For most (if not nearly all) of the rank-and-file membership, it was a no-brainer that the two parties – both similar in so many ways – would seek a more formal partnership.

The wonder is that it has taken so long to achieve.

When Labour undermined Hone Harawira’s chances of holding on to his  Te Tai Tokerau electorate, I wrote this prescient piece on 11 June 2014;

Unless Labour radically changes tack and demonstrates to the public that they are more interested in working together with potential partners – than wrecking their chances at winning votes – voters will be put off. Telling the public that Labour “can work with other parties after the election” is not good enough. Labour must show it can do it.

Otherwise, as one quasi-fascist right-wing blogger put it, the public will perceive that “things are falling apart for the Labour Party“.  He may have a valid point.

“Labour may just be mule-headed enough – and tribally fixated on the FPP-era of politicking – to try and get rid of Harawira at all costs, and thereby torpedo one of its main chances of forming the next government.”

At which Scott Yorke at Imperator Fish added;

“How not to win an election…

…Pretend that we still have a First Past the Post electoral system.”

It is supremely ironic that National – the champion of the Cult of Individualism – can work collectively and collegially with other political parties. But Labour – a party of the left, which espouses collective action for the greater good – is desperately and greedily scrabbling for votes for itself and attacking  potential allies.

That was written four and a half months out from the 2014 election.

After Labour’s disastrous drubbing at the 2014 election,  I penned this post-mortem on 26 September 2014;

“The forces on the right are very united”,  said Josie Pagani, on TV3’s political panel. And she would be 100% correct.

This is one of the lessons that Labour should be taking from the 2014 elections; unity is strength.

National did not seek to destroy potential allies. With the exception of the Conservative Party, it actively supported them. Either with direct deal-making (Epsom and Ohariu), or with “nods-and-winks” (Maori Party).

Even with the Conservatives – though Key refused any actual deal-making, he did not go out of his way to under-mine Colin Craig’s party. Just in case they reached the 5% thresh-hold and thus became potentially useful to the Nats.

By contrast, Labour campaigned to destroy the Mana-Internet Party, and the Greens undermined Labour with it’s comment that Labour’s policies would have to be “independently audited” – a phrase picked up by Key and used to attack Cunliffe.

Key projected stability and co-operation on the Right.

The Left projected intense rivalry and a hatred of each other that was volcanic in intensity.

Who did Labour and the Greens think the public would vote for?

Ten things Labour and the Greens should consider in the coming days, weeks, months, and next three years.

Perhaps Labour’s worst mistake of all the above was constantly deriding the Mana-Internet alliance. The constant attacks on Hone Harawira and his Party signalled to the public that Labour was weak; full of self-doubt and lacking in self-confidence. Labour’s  desperation for votes was so dire that they were willing to attack and destroy a potential coalition ally, to cannibalise their electoral support.

And the public took note.

Contrast Labour’s treatment of Hone Harawira and Mana-Internet, with how John Key related to ACT, United Future, and the Maori Party: with confidence; courtesy; and collegiality.

When Key refused to make a deal with Colin Craig’s Conservative Party, he did so with professional courtesy. There was never any rancor  involved, and despite refusing any Epsom-like deal, Key still left National’s options wide open to work with the Conservatives.

Key even flip-flopped on his previous hand-on-heart promise never to entertain any coalition deal-making with Winston Peters;

“I don’t see a place for a Winston Peters-led New Zealand First in a government that I lead.” – John Key,  2 February 2011

When the public looked at Key, they saw a politician who said categorically he would be prepared to work with anyone.

The public liked that. The public want politicians to work together for the good of the country. Key not only said as much – he demonstrated it by working with parties as disparate as ACT, the Maori Party, United Future, and the Greens (though the latter not in any formal coalition agreement).

Whoever leads the Labour Party after 18 November – take note.

It appears that Labour, belatedly, has finally taken note. Specifically, they have taken note of 21st Century Realpolitik in New Zealand;

Adding to Labour’s woeful performance is it’s constant habit of  replacing their leader almost like we change the oil in our motorcars. As I wrote on 10 October, 2014, after Cunliffe was dumped as party leader;

The only other parliamentary party that goes through it’s leaders like I go through a pack of toilet-paper is ACT – and we don’t really want to be like ACT, do we?

Support for the formal  MoU was positive from Labour-leaning blogs such as The Standard, and grass-roots members generally seem to welcome what was an obvious strategic move by both parties.

Those who were ascerbic tended to be the Right Wing (for obvious reasons), and some cynical media for whom deep political analysis has long eluded them.

This asinine “tweet” from  Heather du Plessis-Allan had all the constructive insights of a rural long-drop made from decaying, moss-covered weatherboards; 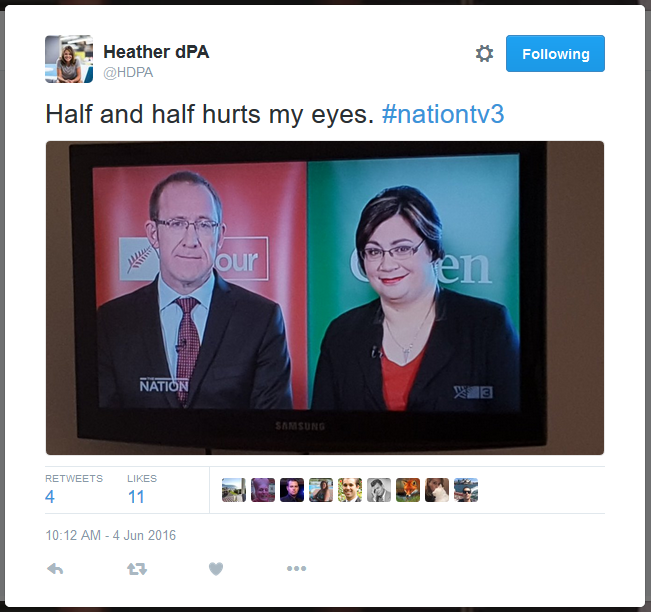 It “hurt her eyes”! Oh, how jolly witty!

It received eleven “likes”. Out of 4.5 million New Zealanders.

Is this the new nadir of 21st century journalism in New Zealand? All I can say is; thank-the-gods-for-Radio-NZ.

Some other media punditry was only marginally better. Either New Zealand’s political journalists have become too cynical; too jaded; too dismissive to offer constructive reporting and analysis of new events – or, perhaps, such new events are beyond their ken to fully understand.

This column from former ACT-leader Rodney Hide, published in the Herald on 5 June;

– spoke more of the author, than the political event he was commentating on.

Hide’s piece is little more than some bitchy, snide derision dressed up as political commentary. However, the more one reads, the more one becomes acutely aware that – carrying the “marriage of convenience” metaphor a step further – Rodney Hide is positively purple with apoplectic jealousy.

Hide is the bachelorette who missed out on getting a rose, and he’s miffed!

Whatever Hide might say about the Greens, there are certain truths he cannot easily dismiss;

So for Hide to sneer at the Labour-Green MoU is a bit rich, considering his own party is on terminal life-support, and survives purely at the pleasure of the National Party. When ACT’s usefulness to National has finished – the electoral plug will be pulled from the political respirator that keeps ACT’s brain-dead corpse “alive”.

ACT’s passing will be the point in our history when we mark the decline and demise of neo-liberalism in New Zealand. Future generations will view it as a mirror-image of the 1960s/70s youth counter-culture movement; cruel, self-centered, and full of hatred for those impoverished for whom the “free” market failed.

In the meantime, the Green Party will do what green things tend to do: grow.

And the jealous bitterness of Rodney Hide will consume him to his final days.

“We do not like jack-ups or rigged arrangements behind the people’s back. We’ll go into this election, just ourselves and our policies seeking to change how this country is governed.”

“But the idea that you would go out there with a pre-arrangement on a deck of cards you’ve never read, we simply can’t see how that works.”

Which is deeply ironic, considering that;

(a) Prior to an election, Peters never discloses to the voting public whether he would coalesce with National or Labour,

(b) Once the election is over, Peters then negotiates in strict secrecy with both National and Labour – in effect, “behind the people’s back“.

In effect, a Party Vote for NZ First is akin to giving that political party a blank cheque; the voter has no way of knowing where that “cheque will be spent”. Will we get a National-led coalition? Or a Labour-led coalition?

At least with parties like ACT and the Greens, the voter has a good idea where a vote for either party will end up on the political spectrum.

With a vote for NZ First, you are effectively handing over to Peters your voting ballot-paper, un-ticked,  and he alone will decide whether to cast it for a National-led coalition or Labour-led coalition.

Peters’ derision of the MoU  was therefore wholly predictable.

Peters understands that a resurgent Labour-Green team poses a dire threat to NZ First’s chances of being “king maker”, post-2017 election. If closer co-operation between Labour and the Greens  results in electoral success and the birth of a new red-green coalition government, NZ First’s role as “king maker” would be scuttled.

In such a case a  vote for NZ First becomes a “wasted” vote.  He would be left isolated on the cross-benches, sniping impotently at Prime Minister Andrew Little, and his Deputy PM, Metiria Turei.

Another jilted political suitor who missed out on  a rose.

Evidence for the Defence

There is nothing preposterous about a closer  Labour-Green relationship.  It is no more absurd than the Liberal–National Coalition which has existed in Australia since early last century;

The Coalition, also known as the Liberal–National Coalition, is a political alliance of centre-right parties, which has existed in Australian politics in various forms since 1923.

And coalitions in Europe are the norm.

So what was the fuss about the “living arrangement” between Labour and the Greens?

Summing up for the Jury

At the moment, the public sees the National-Maori Party-Dunne-ACT coalition, and understand it. But one thing that voters want to know is; what would an alternative to a National-led government look like?

Far from negotiating this Memorandum from a position of weakness, as some have suggested, it is instead a well-executed strategy. As Andrew Little said with simple clarity;

“Voters want to know that there are opposition parties who are capable of working together, can work strongly together and can offer stability and certainty. And that’s what this agreement is about, that’s what we will demonstrate.

Up-coming polls will show whether the voters like what they see.

And on election day next year, the verdict will be delivered.

Imperator Fish: How to win an election

TVNZ News: No deal – Key leaves Colin Craig out in the cold

Boots Theory: On the M.O.U.

Pundit: In which universe will Winston Peters become PM?

The Standard: Labour Green announcement – working together to change the government

The Standard: Why is it that?

A Study in Party Stability

The secret of National’s success – revealed