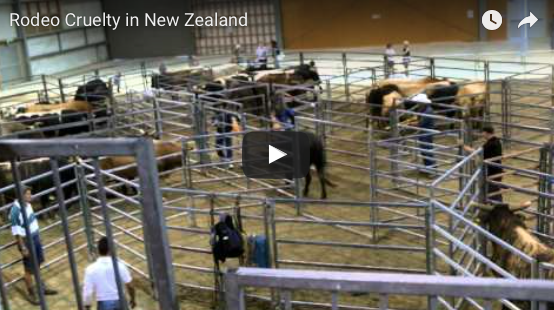 “La tortura no es cultura” was the phrase used when Catalonia officially banned bullfighting in 2010.

It translates to mean “torture is not culture” and it’s a moving phrase that has stuck in my mind over the last 10 years or so of animal advocacy I’ve seen. Bullfighting was arguably an integral part of the culture in Barcelona and an important source of income to the region. But Catalonia banned this blood sport anyway because hurting animals for entertainment like that is wrong. Even if it was a part of their culture they appraised the situation with mindful compassion and decided collectively that they didn’t wish to be associated with this vicious form of entertainment. As of yet there is no decision regarding rodeo in New Zealand so when I hear Nathan Guy saying rodeos are “important to New Zealand society” I feel like that would come as a shock to most of the people actually living here.

Most of us have never been to a rodeo or even seen this “sport” which was imported from the United States. They’re run by small cliques in rural areas and they cause a hell of a lot of animal suffering and it’s fair and right for the rest of us to tell them to cut it out. It’s correct for events such as this to be monitored, because when the echo chamber of locals gets to the point they fail to see the inherent cruelty in what they’re doing that’s about the exact point outside intervention is needed. The people running rodeos have decided that what they’re doing isn’t wrong and they want to keep doing it. But 63,000 people signed a petition to end this hobby racket because we don’t want to see calves, cows, horses and other animals in terror and having their bodies abused for fun. If Nathan thinks the rodeo is important to New Zealand society, I would argue that an end to animal suffering is important to the 63,000 individuals who went out of their way to inform him they’d like to see it stopped.

This feels like another attempt by government to be seen as listening to the people, but with an intention to continue as always. The Minister has made it clear that compassion is of little importance to him. If he refuses to admit that rodeo is cruel just to pat a few backs and line a few pockets in all honestly I think that makes him a crummy Guy.

At the centre of this issue is the animals. This is the real deal of rodeo in New Zealand – terrified animals, injured animals, abused animals and I’m one of many locals who did grow up in rural regions who’d also like to see it stopped:

If you passionately agree that rodeo is wrong we need to keep the pressure on. Let’s communicate – with resilience and let John Key know what we think: