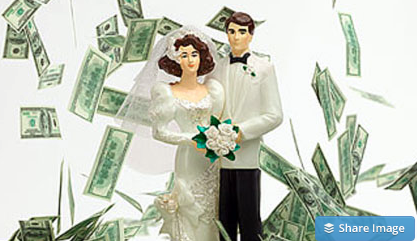 The Family First report, Child Poverty: Don’t Mention Family Structure by Lindsay Mitchell extols the value of the institution of marriage.  According to her, family structure is the elephant in the room when child poverty solutions are discussed.

“Unemployment, low wages, high housing costs and insufficient social security benefits are consistently blamed for child poverty yet a major culprit (if not the major culprit) is family malformation, that is, a lack of two married committed parents.”

So being not ‘married’ and therefore not ‘committed’ makes your child’s poverty your fault! Sole parents, valiantly struggling to cope with the aftermath of violent relationship, or a partner who has taken off to Australia leaving her literally holding the baby, or bereavement, will likely see her views as entirely irrelevant.   Marriage or re-partnering can be a highly risky venture for many women. NZ has a shocking record of intimate partner violence and child abuse at the hands of step-fathers.

To say that parental breakup is the prime cause of child poverty is a bit like saying spots are the prime cause of measles. Financial mismanagement, ill-health, alcoholism, drug addictions, incarceration, poor housing, food insecurity, loss of work, lack of support, sick children can put unbearable stress on even good relationships.

In support of her theory that child policy is due to rise of sole parenthood Lindsay Mitchell uses the MSD graphic and says:

“The official source of child poverty statistics, the Household Incomes Report, only provides data extending back to 1982. Since then, all of the relative measures depicted below6 show the proportion of children in low-income households has risen. Each line charts the percentage of children living in households with incomes below varying percentages of the median household income. The most commonly used poverty threshold is 60 percent of the equivalised median household income after housing costs (AHC). In 2014, 23 percent of children lived in such households (blue line); in 1982, the proportion was 12%.”

What? No mention of the impact on child poverty of the Ruth Richardson benefit cuts of the early 90s?  Lindsay Mitchell studiously ignores the sharp rise that is so clearly policy driven. 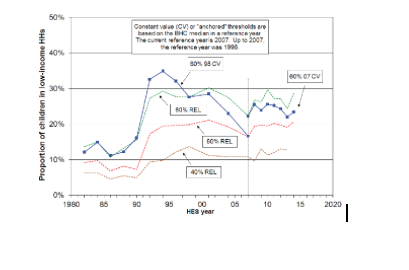 We can agree with her that sole parents and their children have higher rates of child poverty compared to married or defacto couples with children.  But around 50% of poor children come from two parent households.  In the welfare system, couples with children are in deep poverty as Boston and Chapple’s table shows. Coupledom itself hardly seems to be the answer.  Perhaps a high number of sole parents and their children are poor because they don’t have enough to live on and neither do couples on benefits? Maybe policy should fix that?

It is deeply offensive to read this:

“It is not the intention of this paper to explore at length why marriage has fallen out of favour with most social science academics and policy-makers. The aim has been to show that marriage provides the best economic environment for raising children. The evidence is overwhelming and incontrovertible.“ p 41

Apart from the blanket statement that marriage is best when often it clearly is not, her snipe at left wing academics is misplaced. Thinkers on the left favour strong, caring, mature relationships of equals. The left reject the limitations of traditional marriages where the woman is assumed to be dependent on the man. Parents who are respectful and caring of each other do provide a good environment for children- this can often be found in ‘unwed’ groups,  but is too often not found in those who are traditionally  ‘wed’.

Among the three men endorsing this report is DR DON BRASH –for goodness sake!

“Once again, Lindsay Mitchell has produced a stunning indictment of society’s increasing indifference to marriage. There can’t any longer be any serious doubt that the breakdown of the institution of marriage has been a major contributor to economic and social poverty in New Zealand over recent decades. And easy access to no-questions-asked state welfare has in turn been an important contributor to that outcome.”

Excuse me Dr Brash—we have read your autobiography…

Lindsay Mitchell wants to claim child poverty is caused by marriage dissolution at the same time as she claims policy encourages that dissolution because separated couples are better off on welfare.

What exactly does Lindsay Mitchell want here? Less welfare? Policy implications of this report might be taken that she intends a reduction in the safety net yet further to limit ‘incentive to separate’ and to further stigmatize the unwed. These moves would be extremely dangerous. It is best to accept the world the way it is, rather than make policy for the world the way family values ideologues think it ought to be.

What is needed is a total review of how WINZ regards relationships in the welfare system. We should create conditions for good relationships to flourish. For example we should have individualised benefits like NZ Super. We should not pay married couples less just because they are married or defacto- payments, nor encourage spying on sole parents to sniff out unfolding new relationships so as to punish her with an investigation. Nor assume that any man who takes an interest in her should be expected to support her and her children financially. See CPAG report on relationship issues.