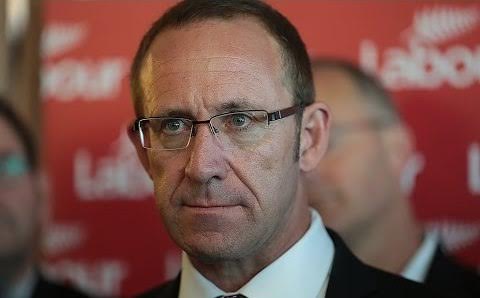 READING ANDREW LITTLE’S pre-Budget speech, one could almost be forgiven for thinking he was the leader of a socialist party. Almost. Because in spite of the fact that he’d asked the Parliamentary Library to dig him out the most important statistic in class politics: the one showing how much of the additional wealth society creates goes to the bosses, and how much to the workers; he offered no practical suggestions for how to even-up the (now seriously boss-heavy) scales.

For those who are still catching up on the detail of Little’s speech, here’s the kicker. Since Labour left office in 2008, the share of economic growth going to employees has fallen from around 50 percent to 37 percent. Over the intervening eight years, that represents a loss for the average Kiwi family of $13,000 – or, roughly, $50.00 per week.

That dollar figure is only the most tangible expression of what Little’s statistic really communicates – i.e. the degree to which the international working-class has been deprived of its former economic, social and political power. The downward plunge in global living standards occasioned by the Global Financial Crisis (GFC) accounts for the lion’s share of its losses, but the pro-employer policies imposed by neoliberal governments in response to the GFC have compounded them significantly.

In most cases these elite-friendly policies were introduced in the name of “austerity” and took the form of savage cuts in the scope and scale of welfare payments to the most vulnerable. In New Zealand, however, it was possible for the Government to rely upon the existing workplace relations legislation to ensure (with one or two helpful tweaks) that a constant downward pressure was maintained on workers’ wages and conditions. Throw in the Key Government’s relentless, but invisible, downsizing of the public sector; and its unofficial campaign to drive thousands of beneficiaries off the welfare rolls; and those “Middle New Zealanders” unaffected by the changes were easily persuaded that they were living under a kinder, gentler National Party.

Little’s mission is not only to expose the falsity of this widespread political perception (and his $50.00 per week stat does that admirably) but also to advance a clear and unequivocal policy for reversing that 13 percentage point reduction in the size of the workers’ slice of the economic pie.

Both the UK’s Jeremy Corbyn and the USA’s Bernie Sanders are in no doubt as to what any policy-package intended to rebuild working-class power must include: measures to strengthen the right of working people to organise themselves in trade unions. So, what does the leader of the New Zealand Labour Party say on that subject?

Well, the only reference to unions that I could find in the entire speech was in this sentence: “We’ll work with businesses and with unions on lifting productivity and sharing the gains fairly.”

Now, that could mean that Labour intends to remove the legal leg-irons currently preventing the trade unions from extracting a fair share of the economic growth generated by their own members – not to mention the hundreds-of-thousands of unorganised workers who have similarly lifted New Zealand’s productivity. It could also mean that Little intends to introduce legislation making it a lot easier for workers to join unions, and a lot harder for outfits like Talleys to “persuade” them not to join. “We’ll work with businesses and with unions” could mean anything from German-style “codetermination” to full-scale “industrial democracy”. Or, it could simply mean inviting the head of the CTU and the head of Business New Zealand into the PM’s office for a friendly chat – and nothing more.

That’s the problem with including just one sentence about unions in a speech highlighting the degree to which the workers’ slice of the economic pie has shrunk. It leaves far too much unsaid. Like: how much of the pie are the workers entitled to? Fifty percent? Sixty? How big was it in the days when New Zealand’s workplace legislation ensured that 50-60 percent of the workforce belonged to a trade union? Is that Labour’s target?

And, if it is, how are we to reconcile a Labour Party committed to increasing workers’ power, with a Labour leader promising to “encourage more young people to start their own business, to be their own boss, with our young entrepreneurs policy”? What share of the pie does Labour believe these millennial capitalists deserve?

Unfortunately, you won’t find the answer to this, or to any of the other questions raised here, in Andrew Little’s pre-Budget speech.