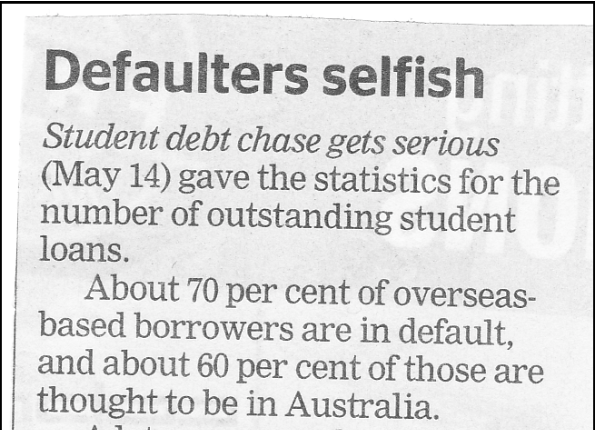 It is amazing how many blame the victims of neo-liberal ideology, rather than looking at the causes of why things happen.  Are some people really so simple-minded that they can’t see beyond their immediate prejudices…?

So yet again, I point out some ‘home truths’ to people like Ms Moore, who seems to have selective amnesia when it comes to recent history…

from: Frank Macskasy <fmacskasy@gmail.com>
to: Dominion Post <letters@dompost.co.nz>
date: Sat, May 21, 2016
subject: Letter to the editor

She is indeed correct that increased student fees and student loans were introduced in 1992. Before that, tertiary education was near-free.

When Moore states that “perhaps if they [student loan defaulters] repaid their loans, the government, might be able to allocate a grant to parents in need of help” misses the point that since 1986 there have been seven tax cuts. The last two in 2009 and 2010 cost over $2 billion per annum

That is why schools and hospitals are being under-funded and children are in need in equipment such as lap-tops, as Ms Moore pointed out.

It is a double standard that we now saddle our youth with massive student debts and threats of prosecution.

Perhaps she should cast her ire at National Ministers who have gained personal benefit from free education and are now abusing their power to force others to pay for what they got for free.

Aged Care: The Price of Compassion

Nick Hanauer – a devastating demolition of the Neo-liberal dogma of tax cuts!

Tax cuts and jobs – how are they working out so far, my fellow New Zealanders?

Letter to the Editor – tax cuts bribes? Are we smarter than that?