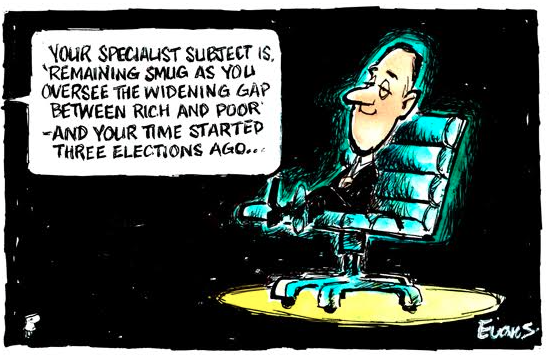 It’s embarrassing when a Prime Minister is ejected from the Speakers Chamber, and rare.

Key was thrown out yesterday by the Speaker for treating Question Time like it’s a roast at a stag party.

Offensive, abusive and needlessly antagonistic, the boorish behaviour of Key in Parliament is a disgrace. His screaming at the Opposition last year that they were on the side of rapists and murderers was topped yesterday as he lashed out at Amnesty International, Greenpeace, Red Cross and the very kind Mojo Mathers to distract from the increasing heat he is facing over aiding and abetting the creation of a Tax Haven here.

He deserved to be kicked out, because we are facing serious questions from serious people about how much of a tax haven NZ has been allowed to become. Key was warned 7 times that he risked this, and not only did nothing, he weakened the law in 2011 and had his own lawyer contacting the Revenue Minister to stop IRD crack downs.

Pn the Panama Papers, the Pundits cry, ‘there is no smoking gun’ – FFS, this isn’t game! We are having our leadership against corruption eroded because Key thinks wealthy people avoiding tax is fine and an industry turning over $50million annually is worth being seen as a functioning Tax Haven.

This isn’t left or right, it isn’t boorish grand standing that’s required, we need real leadership to crack down on these vested interests.

We need the Prime Minister to be a leader, not a spoilt man-child.