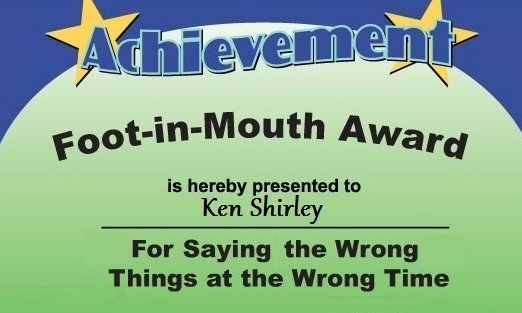 Most folk won’t remember who Ken Shirley was, prior to his current ‘gig’ as  CEO of the Road Transport Forum (RTF), representing road transport interests since July 2010.

From 1984 to 1990, Shirley was nominally a Labour Party MP. He was closely aligned with the likes of Roger Douglas, Richard Prebble, and other right-wingers who had seized control of the party during the 1980s.

From 1996 to 2005, Shirley was an ACT Party MP. As such, he was an acolyte of  the neo-liberal school of economics and a strong adherent of free market forces. Part of ACT’s policies is to scrap the minimum wage.

“The new $15.25 minimum wage will hit regional employers especially hard… In Auckland, $15.25 might not sound like much, but small businesses in the regions who generally charge less will struggle to bear the cost. Hikes to the minimum wage will discourage new employment, and lead to more lay-offs and business failures.

The first employees to suffer will be young, low-skilled workers who won’t be offered a chance to prove their worth. Pulling up the jobs ladder will only add to poverty in low-income areas.

This is a wage set for the distorted Auckland economy. Why should the rest of the country have to bear the same costs?”

[Fun Fact: As a Parliamentary Under-Secretary, Seymour is currently a taxpayer-funded beneficiary on a salary of $185,098 p.a. – which equates to nearly $89 per hour. One wonders if “small businesses in the regions who generally charge less will struggle to bear the cost” of Seymour’s salary?]

But returning to Ken Shirley; as an ex-ACT member of Parliament he is still most likely an  advocate for the abolition of the minimum wage.

On 5 May, Shirley was invited to be a commentator on Radio NZ’s afternoon Panel, hosted by Jim Mora;

“Ken Shirley of the Road Transport Forum discusses what’s behind logging truck crashes and what needs to be done.”

At one point in the discussion, a suggestion was made that low wages in the trucking industry is not attracting the most highly-skilled and experienced workers;

Jim Mora: “How bad do you think, Ken, is this situation with truck driving?”

Ken Shirley: “Oh, the spate we’ve had in Northland is just unacceptable. There’s no excuse for roll-over[s]. We know we have some difficult roads in New Zealand with topography, Northland’s is particularly difficult.

But there’s an obligation on the drivers and the forestry companies who hire the drivers to make sure they drive to the conditions. That’s the obligation on all drivers, and the spate we’ve had is just unacceptable, and I think inevitably it seems it’s not mechanical failure, it is driver error.

Whether it’s speed, inattention, or fatigue.”

Jim Mora: “So, it’s a…what, is it a hiring of drivers problem, hiring the wrong drivers, or is it a keeping-costs down problem, Ken? What do you think?”

Ken Shirley: “Well, the two are related of course. We have a chronic shortage of H5 drivers in New Zealand. That’s the heavy combination driver, the truck and trailer. It’s a global problem, but it’s particularly severe in New Zealand at this time. We’ve had it for many years, but with the activity in the economy now, that we are currently having, there is a chronic shortage of drivers.

Many of our members throughout the country are just saying they simply cannot get drivers. And I guess inevitably, you can, in that situation, such a tight situation, out of desperation, you can perhaps hire someone who’s not as skilled as you would like or need, out of sheer necessity. But at the end of the day, there’s no excuse. This should not be happening. We’re taking it very seriously.

We’ve actually instigated a series of roll-over prevention seminars in conjunction with NZTA around the country. They started some six weeks back. And these are actually very good seminars. But we have to educate the drivers, the loaders, the dispatchers, the transport operators themselves, but we must not have this level of roll-over.”

Jim Mora: “Ken, is it the… what is it deep down? Is it the meager wages paid, as some people are saying? You’re just not attracting the skills to the industry?”

Ken Shirley: “Ah, no, you do, it’s, you know, you can have a driver error. But it’s, it’s… you have to have better training, better awareness, that has to be the answer.”

Jim Mora: “So, there was this work-force development strategy, wasn’t there, ah, put into place a wee while back to try and try to entice more people to become truck drivers because of that shortage. But what is the point of a work-force development strategy if we know what the problem basically is, which I’m interpreting as maybe a lack of training and a lack of procedures put in place in the industry – [garbled].”

After a further exchange between Jim More, Peter Elliot (one of the panelists), and Ken Shirley, the host returned the discussion to the matter of wage rates;

Jim Mora: “It does seem though, with the wage rates that we see talked about, that you might not be getting the optimum recruits for the job? Is that a fair criticism, or not?”

Ken Shirley: “Well we know that the skilled labour market across the economy, whether it’s a diesel mechanic, a skilled driver, all of of those industries are, are, reporting severe chronic shortages. And because they are so highly skilled, reliant on a high level of, of, of, experience, when there is a chronic shortage, there is a temptation to often, out of desperation [to] take what you can get. And, and, that’s, that’s when you start to get into issues that like we are seeing and that’s when you start introducing potential road safety problems.”

Jim Mora: “I understand, but would you solve your chronic shortage if you paid higher wage rates?”

Ken Shirley: “Well, indeed, and all the members I speak to want to, but there’s been a race to the bottom, it’s –

… such a fiercely competive industry…”

His comments appear to be a frank admission that the free market has experienced a spectacular  failure on a key point in the Northland logging industry;  that if there is a shortage of  skilled labour, the price of that labour (heavy-truck drivers in this case) should rise – not fall – to attract skilled labour. That is a basic tenet of supply and demand in the free market system.

As the guru of free market economics, Milton Friedman put it;

Assuming there are a large number of employers in a region, or that workers are highly mobile geographically, the wages that a company will pay workers is dependent on the competitive market wage for a given skill set. This means that any company is a wage taker, which is simply another way of saying companies must pay competitive wages in order to obtain workers.

None of which seems to be happening in Northland at present.

To the contrary, logging companies – according to their own spokesperson, Ken Shirley – are engaged in a “a race to the bottom” with drivers’ wages.

To compound the problem, in April of this year, Shirley specifically opposed and condemned outright any attempt to increase the wages of drivers;

“The link between remuneration and road safety is highly questionable and as a recent PWC report highlights, the system will result in a net cost to the Australian economy of more than A$2 billion over 15 years.

It is therefore very concerning that the Labour Party here advocated for the same policy and campaigned on it during the last election.”

National awards and government-imposed orders are not the way to lift industry wage rates or make the industry safer. All they do is saddle the industry with inflexible and time-consuming obligations and additional costs.

Let’s not repeat Australia’s mistake in New Zealand. It has been proven that national awards burden the economy and cost jobs and I hope that Labour and other political parties here will accept that reality and ditch the concept once and for all.”

Shirley’s comments last month are in stark contrast to his public lamentations on Radio NZ.

Not only has the free market failed in one of it’s key tenets – but Shirley is actively opposed to raising wages by any means necessary, to attract skilled, experienced truck drivers.

This should serve as a clear lesson that the innate contradictions of the free market ideology – many of which are little more than articles of faith – will eventually become more and more apparent.

Shirley has inadvertently helped with the slow dismantling of the neo-liberal fantasy.

Unfortunately, knowing how the system operates  in this country,  it will takes catastrophic events with several tragic deaths, before the government acts on this growing problem.

That’s how we roll in New Zealand.

Parliament: Salaries payable under section 8 of Members of Parliament

Radio NZ: The Panel with Peter Elliott and Susan Guthrie

Investopedia: Breaking down ‘Demand For Labor’