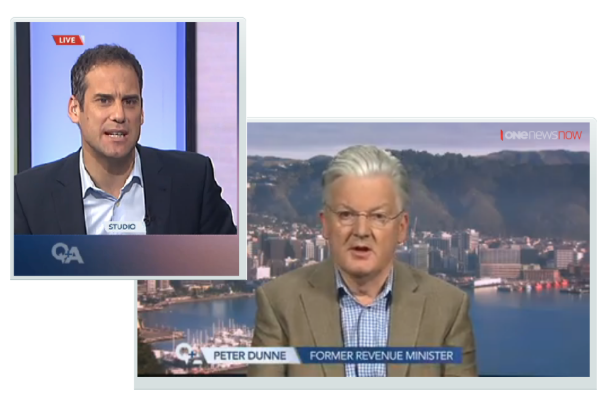 “To put it bluntly, if the label ‘tax haven’ is being bandied about now as it is, sticks, then that’s extremely damaging. You think of the way we perceive other countries that we’ve historically labelled as tax havens. We don’t view them credibly, and I think that’s the big risk to New Zealand.” – Peter Dunne, TVNZ’s Q+A, 2 May 2016

Greg Boyd: “When you were in the job, if the IRD had concerns about this country’s international reputation, how seriously would you have taken that?”

Peter Dunne: “Very seriously. And the way it works is that they report on a series of issues that are both current in the New Zealand tax environment or the international tax environment, and clearly the Government would be foolish not to take heed of that advice. I have to say that at the time I was minister, the big issue of concern that was just beginning to bubble related to the Googles and the big multinationals and the share of tax they were paying. The issue of foreign trusts was on the edges of that, but I didn’t receive any specific advice from the IRD at that time that they were a problem.”

To put some context to Dunne’s response above, first bear in mind that Dunne was Revenue Minister across two governments, Labour and National, from October 2005 to  June 2013, when he abruptly resigned…

…after an investigation into how a top-secret report on the GCSB was leaked to media pointed to him.

Eighty-six emails were sent between Mr Dunne and Dominion Post reporter Andrea Vance in the lead up to the leak but Mr Dunne turned down requests to make them public.

Edited copies of the emails from Mr Dunne show 44 of them discussed the GCSB report, and he planned to meet with Ms Vance the day before she went public…

But how credible was Dunne’s assertion on last week’s Q+A that;

“…The issue of foreign trusts was on the edges of that, but I didn’t receive any specific advice from the IRD at that time that they were a problem.”

– when in May 2012, New Zealand and Russia had been removed from the  European Union banking and corporate “white list” over this country’s frighteningly inadequate  money-laundering controls?

“I would like to inform you that Latvia has intended to exclude New Zealand and Russian Federation from the list of countries whose legal requirements of money laundering and terrorist financing prevention are equivalent to legislation of the European Union.”

Our removal from the EU “white list” had put New Zealand in the same league as the corruption-ridden Russian Federation.

New Zealand’s dumping from the list also comes amid growing publicity around New Zealand registered companies being linked to crime overseas. This includes a report by the Organized Crime and Corruption Reporting Project on how Tormex Ltd, a New Zealand registered company, allegedly laundered US$680 million through a Latvian bank account. It’s just one of many examples of entities exploiting New Zealand’s simple company registration regime. Another is the General Equity Building Society, which claims to hold about US$5.5 billion of equity through unnamed mines, gold, silver and granite ore.

In the same story, Vaughan added,

The World Bank and International Finance Corporation rank New Zealand the easiest of 183 countries surveyed in which  to start a business. Commerce Minister Craig Foss told interest.co.nz in April the Government had no plans to tighten company registration rules.

On the Auckland shell company accused of laundering $680m at a Riga bank, Foss said it was removed from the register in 2010 because it failed to file an annual return.

Too late. The damage to our reputation had been done.

In May 2012, when the European Union’s announcement became public, Peter Dunne was still Minister for Revenue. (His resignation after his alleged involvement in the leaking of the GCSB report was still thirteen months in the future.)

In November 2013, then co-leader of the Green Party, Dr Russel Norman, warned;

“Our secretive foreign trust regime and lax company registration requirements are damaging our international reputation.  Anonymous shell companies and secret trusts are one of the most common ways of moving tainted money into the banking system.”

Yet, only months earlier, as the full implications of the EU’s moves were becoming clear, evidently then-Revenue Minister Peter Dunne “didn’t receive any specific advice from the IRD at that time that they [foreign trusts] were a problem“.

However, whilst  then-Revenue Minister Peter Dunne had not received “any specific advice from the IRD at that time that they [foreign trusts] were a problem“, the Tax Justice Network had, by November 2013, “ranked New Zealand for the first time on its Financial Secrecy Index [at number 48 – see page 17 here]. New Zealand features on the Index due to our lack of transparency around foreign trusts and registered companies, and our below-average levels of co-operation with other countries when it comes to fighting international tax evasion”.

Is it Dunne’s  assertion on Q+A, really credible;

“…The issue of foreign trusts was on the edges of that, but I didn’t receive any specific advice from the IRD at that time that they were a problem.”

No, it is not credible.

As far back as October 2012, Dunne was certainly aware of the problem of secret trusts in New Zealand;

The Herald report goes on to state;

Mr Dunne today dismissed the idea that New Zealand was a tax haven for foreign trusts.

“The key identifying characteristics of tax havens are secrecy and lack of transparency. Those are simply not factors here in New Zealand. Our legislation for taxing trusts is fully transparent.”

Dunne’s dismissive attitude toward tax havens and foreign trusts is starkly summed up in this excerpt from 60 Minutes on TV3’s website;

However, Dunne’s defensive assertions were made to look foolish and mendacious when Herald reporter, Matthew Backhouse , added;

The trusts must be registered with Inland Revenue, but are not required to pay tax and their ownership is effectively anonymous.

He had not seen the 60 Minutes interview but Mr Dunne would have been using “the absolutely correct technical terms”, he said.

“Tax evasion is completely against the law. Tax avoidance means that it’s a responsibility of your accountant to actually look to minimise your tax as best you can within the bounds of the law.”

Mr Key said servicing foreign trusts in New Zealand was a strong and legitimate business that employed a lot of professionals and added to the New Zealand economy.

“It’s a very sensible place to house a trust.”

It is difficult to believe Dunne’s assertion that he “didn’t receive any specific advice from the IRD at that time that they [foreign trusts] were a problem“.

Especially as revelations on 60 Minutes clearly revealed that a problem with tax evasion existed; trusts were central to the rorts; and Dunne was responding to it.

Even Key referenced foreign tax trusts as he rushed to defend his then-Revenue Minister;

Key who said Dunne was right. “He’ll be using the absolutely correct technical term. There are two things, going back to my days at university – tax evasion and tax avoidance. There is actually quite legitimate business in New Zealand for servicing foreign trusts”.

“We are in danger of losing our hard-one reputation as an ethical and respectable country. Peter Dunne’s relaxed attitude to overseas tax avoidance and National’s failed attempts to create a foreign funds hub shows the Government has no concerns about us becoming the Cayman Islands of the South Pacific.”

And Dunne is now telling us that he did not know that foreign trusts were a problem?

“The key identifying characteristics of tax havens are secrecy and lack of transparency. Those are simply not factors here in New Zealand. Our legislation for taxing trusts is fully transparent.”

The legislation may be “transparent”.

John Key, Todd McLay, and Peter Dunne are not.

Southland Times: Taxing Times – New Minister of Revenue still has work to do

Interest.co.nz: How NZ needs to overcome ‘deficiencies” in bank and financial institution regulation to get back on EU anti money laundering and counter terrorist financing ‘White List’

Parliament: The Anti-Money Laundering and Countering Financing of Terrorism (Requirements and Compliance) Regulations 2011

That was Then, This is Now #28 – John Key on transparency