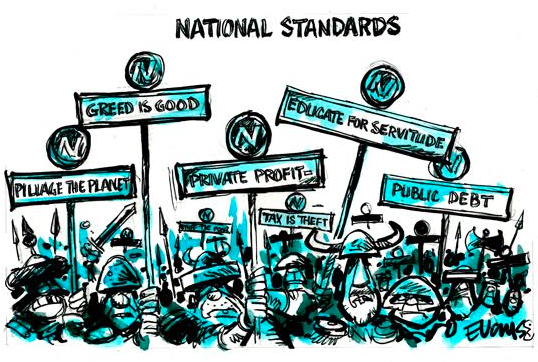 Participation in ECE has risen steadily over the past decade. At the same time expenditure has tripled, to $1.5 billion in 2015. The Government is pushing to hit a target of 98 per cent participation, saying high quality early childhood education could boost long-term achievement and help at-risk children. Centres are required to be regularly assessed by the Education Review Office to ensure they meet standards.

However, the last time a systematic study was done on early literacy and numeracy levels was in 2000. It found large discrepancies by socio-economic status, with poor children more likely to be unable to complete School Entry Assessment tasks such as identifying numbers, re-telling a story or knowing which way to hold a book.

…there are a couple of pretty simple reasons for us spending money on early education and it getting us nowhere.

The simple truth is that this Government has done nothing to help the poor in any meaningful way. Yes they raised the base benefit rate, but seeing as it hadn’t been raised since Ruth Richardson slashed them, that’s more a national disgrace than solution. Very few qualified for this rise and many had other benefits cut. It’s a bandaid on a beheading. Hungry children who live in freezing homes don’t perform well at school! Without tackling poverty, early education can’t do it all.

The other reason the Government have thrown money at Early Child Education is because of their ideology. The Government think forcing the poor and those on benefits out to work in low paid meaningless jobs is more important than those people looking after their children or retraining. To do that, the Government have had to throw huge money at ECE, but they aren’t paying for well trained and well funded teachers who help prepare and shape children’s minds for education, the Government are just wanting to pay for babysitters so beneficiaries can’t turn down working in shitty jobs because of childcare issues.

The promise of Democracy is that we can look into the faces of our children and know they will have a better deal at life than we have had – National are dishonouring and denigrating that dream while causing immeasurable social damage in their wake.

We deserve better than this.