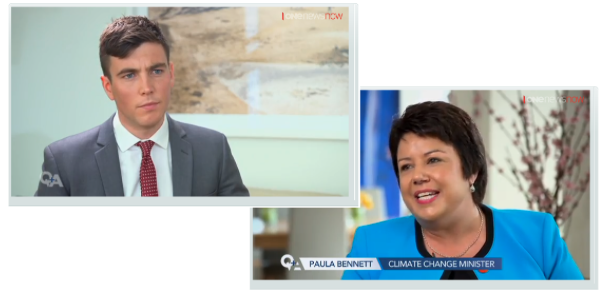 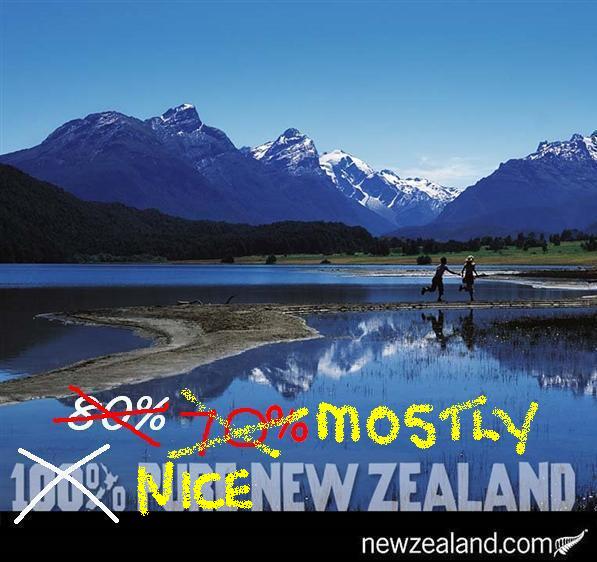 TVNZ’s Q+A on Sunday 24 April featured an interview with Climate Change Minister Paula Bennett. Her responses were further evidence that  National was  increasingly  unable (or unwilling) to cope with the growing threat of climate change.

Posing a series of surprisingly incisive questions and follow-ups, the ever-youthful-looking Jack Tame held Minister Bennett to account in a way that few other interviewers have done;

Up untill now, Jack Tame’s presence in the US focused mainly on the theatrics of the  Hollywood entertainment industry or the equally-theatric Presidential primaries. They were for the most part light, breezy stories – even with the increasingly bizarre and somewhat menacing nature of the rise and rise of  Donald Trump, as the potential Republican candidate.

However, on this occassion,   Tame’s Q+A interview was a masterful deconstruction of Minister Bennett’s waffle, revealing  how woefully unprepared for Tame’s skillful probing she really was.

As the thirteen minute segment progressed, it rapidly became apparent that, aside from platitudes and rhetoric,  Bennett had no real answers or  any actual, meaningful commitment to addressing New Zealand’s increasing emissions of  greenhouse-gas pollution of our atmosphere. It was as it she were still Social Welfare Minister, patiently explaining how National would be “helping” solo-mums with contraception, all the while sounding like an overly-concerned, benevolent, tough-loving  nana.

In fact, not since 2 May 2015 – when Corrections Minister Sam Lotu-Iiga was interviewed and demolished by seasoned interviewer, Lisa Owen, on TV3’s The Nation – has a government minister had their ineptitude so publicly paraded for the entire country to witness (if they so decided to tune in on a Sunday morning, at 9am.

Unfortunately, we should not be surprised that National is luke-warm on the looming crisis of climate change. Despite making very clear promises, National has broken one of it’s prime committments to the Emissions Trading Scheme – to eventually  include agriculture.

The time-line to this act of duplicity clearly illustrates National’s early promises and then reneging;

In a speech by  then Opposition-leader, John Key;

“In particular I’m going to speak about the biggest environmental challenge of our time: global climate change.

The National Party will ensure that New Zealand acts decisively to confront this challenge.

The scientific consensus is clear: human-induced climate change is real and it’s threatening the planet. There are some armchair sceptics out there, but I’m not one of them…

… National is committed to growing our economy. Confronting climate change will be a vital part of the policy mix for fuelling that growth…

… In the decades ahead, peoples’ perceptions around climate change will affect the brand image of New Zealand and its exports. New Zealand must take credible steps to reduce greenhouse gas emissions or risk becoming a trading pariah…

… National will have policies that reflect the fact that living on a diet of carbon will be increasingly bad – bad for the world and bad for our economy. We will have policy that encourages ‘climate friendly’ choices like windmills, hydro power and tree planting, and reduces the desire for ‘climate unfriendly’ behaviours, like burning coal…

… National will bring all Kiwis – industry, energy producers, farmers, mums and dads – closer to a shared and well-understood goal. We need to be united in our pursuit of a ’50 by 50′ target.“

Prime Minister John Key rejects demands  to amend the  Emissions Trading Scheme before it takes effect on the energy and transport sectors in July despite calls from business groups, farmers, and ACT.

“I’d say it’s unlikely it would be amended.”

Climate Change Minister Nick Smith announces that whether or not agriculture comes into the emissions trading scheme  in 2015  will depend on technological advances and what other countries do.

“… It is not in New Zealand’s interests to include agricultural emissions in the ETS yet.“

National introduces  “Climate Change Response (Emissions Trading and Other Matters) Amendment Bill 2012”, which will remove agricultural emissions indefinitely, and will,

“remove a specified entry date for surrender obligations on biological emissions from agriculture”.

National’s repudiation of it’s 2007 committment to include agriculture was complete. Despite a clear promise by our esteemed Dear Leader, agriculture was permanently omitted from the ETS.

During National’s four years in office, they have broken several promises and the weakening of the ETS is simply one more on the list. It also further highlights  John Key’s ability to say one thing – whilst knowing full well that he has no intention of fulfilling committments, or will do completely the opposite.

An editorial in the Dominion Post, on 20 April, was no less scathing in it’s condemnation of National’s inertia;

The Government’s climate change policy has been a failure and will have to be rebuilt. There needs to be a fundamental change in the Emissions Trading Scheme, the subject this week of a damning report by the Gareth Morgan Foundation.  But other changes are also needed.

Bennett concedes, however, that the ETS was “not perfect”, and is now being reviewed. In fact the ETS has been a fiasco. What’s more, it continues to cast its dirty shadow.

The Government has banned the purchase of  foreign credits, but it could still use the bad credits to meet its climate change targets up to 2020.

It must not do so. Instead, it needs to revamp the whole scheme, starting by ending the subsidies it gives to polluters such as the oil industry. The “one for two” scheme introduced in 2009 allows businesses to pay only half the cost of their greenhouse gas emissions.

It also needs to reverse its decision to keep agriculture, which produces half the country’s emissions, out of the ETS. National argues that making farming pay for its pollution would be unfair because there is no workable way yet of reducing animal emissions and our export industry should not be penalised.

Farmers, however, are not exempt from the country’s global environmental duties, and will also respond to economic signals – even if this is a pledge to bring agriculture into the scheme within, say, five years

Jack Tame’s superb interview on 24 April merely confirms pathetic National’s track record on this issue and it now appears that  Minister Bennett will simply follow in the footsteps of her do-nothing-predecessors, Ministers Smith, Groser, et al.

Bennett certainly has no intention of adopting any of the bold, radical – but much-needed – policies as advocated by Professor Jim Skea, co-chairperson of the IPCC Working Group III, and interviewed by Radio NZ’s Kathryn Ryan on 27 April;

Listen to the two interviews and judge for yourself which person is seriously committed to combating climate change – and which person is a politician who has plenty of empty platitudes to offer, but little else.

In her previous role as Social Welfare Minister, Paula Bennett had much to say about welfare-fraud.

Her empty words on  addressing climate change is a fraud on a much grander, and ultimately vastly more destructive,  scale.

Jame Tame’s interview with Minister Bennett reveals a young man with considerable journalistic skills. He should be given every opportunity to make full use of his under-utilised talents.

TVNZ (and TV3) should maximise the talents of their journalistic and production staff by shifting Q+A and The Nation to prime time viewing slots during the early evening.

Why hide excellence early on weekend mornings, where it is not easily appreciated and valued by the general public?

Ms Bennett, your performance on 24 April was a dismal failure. You are either unwilling to seriously confront the challenges of climate change or, apparently, you are in way over your head on this issue.

Either way, you should resign your Climate Change portfolio. This job is too important to be left to your glib inanities.

Interest.co.nz: National would phase in ETS obligations for transport, electricity, industrial sectors; Will review Agriculture in 2014

Radio NZ: How do we wean ourselves off fossil fuel ? (alt. link) (audio)