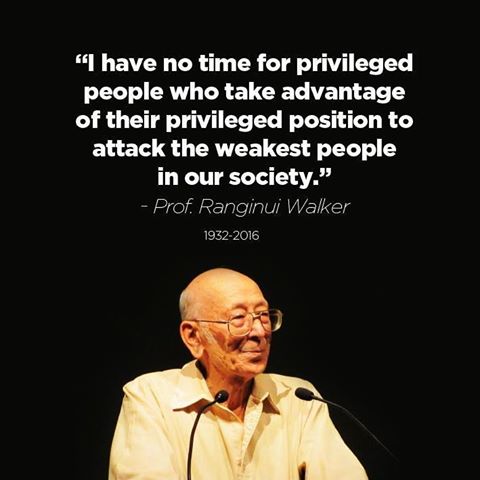 Alarmist New Zealand Herald headlines condemned a Housing New Zealand tenant for taking in boarders. The article repeated neighbours’ complaints about the woman tenant; that she was renting out rooms, and had built a structure in the backyard. According to the media article, the woman and her occasional tenants live in a $1.4 million home in upper-class Freeman’s Bay, as if poor people shouldn’t share their expenses, or live in ‘flash’ areas, though $1.4million is hardly a huge amount for Auckland these days. You’d think our main daily newspaper would have more important things to write about than hearsay based on apparent jealousy from wealthy residents aimed at the poor. But then at the same time the Herald uncritically celebrates the elite British Prince and Princess’ ‘Royal Tour’ of the Indian region, so maybe we shouldn’t be surprised. Gossip and celebration of elites is what passes for news there these days.

Elsewhere, the tax department pursues tradesmen doing cash jobs, while hypocritically mega-rich multi-national corporations evade taxes with legal trusts, offshore investments and other dodges, and Facebook and Google Inc et al in New Zealand pay only slightly more tax than the above-average citizen. Other times there’s the hysteria, because, of the 285,000 beneficiaries across the country, 927 defrauded the state of about $30million. A 2014 report estimated total benefit fraud at about $80 million a year while tax fraud was off the scale at $2billion. And of course tax fraudsters are much less likely to go to jail for their crimes than those who claim benefits to which they are not entitled.

There’s careful crafting of a public perception that overstates the impact of benefit fraud and crimes committed by the poor, and downplays institutionalised racism, inequity and inequality that create poverty to begin with, so that if you have a big family, or you’re a young male Maori, you’re really only half the citizen of someone white, or rich or living in a big, privately owned house in Freeman’s Bay.

There are the claims from businesses that paying workers a living wage or improving health and safety at work will cripple the economy and undermine the very profitability of business, while CEOs are paid millions of dollars a year. The Minister of Finance complains that New Zealand workers who don’t chose to work long dangerous hours on farms are ‘pretty hopeless’ as a justification for preferring immigrant labourers who don’t know or care about their rights to safe work.

Widows and cancer sufferers are made to actively seek employment. Councils consider a ban on begging so even if there are increasing numbers of poor, homeless, addicted or dispossessed, shoppers won’t have to see them. Housing speculation drives the prices up and out of reach for many, especially the young, while those born at the right time with access to equity are able to acquire multiple houses. Low paid fast food workers in global chains are forced to threaten strikes for basic rights and security as employers seek to maximise profits and minimise costs at workers’ expense. Even in the public sector health care workers are reduced to threats of strike action to get their own employers to address capacity limits, dignity and safety in the workplace.

Transnationally, the TPP promises free trade and open access to our markets by overseas producers; read as job losses, downward wage pressure locally and environmental and labour exploitation offshore. It represents a victory of consumerism and globalised production against nation based struggles for workers’, consumers’ and environmental rights.

Be under no illusion, the narrative and the practice of the unholy alliance of state, corporations and the media, is one that continues to come from an increasingly powerful elite, the dominant capitalist class, directed against the poor. The narrative carries the line that workers are lucky to have a job, they should put up with what they get, and should be grateful for accommodation, employment, social welfare safety nets, and other concessions offered by the ruling political and economic class. It’s like employees owe their bosses a duty of obsequious genuflecting gratitude, and should put up with anything, especially if the workers are uneducated, desperate or young.

The struggle for any wage, for a living wage, for job security, for safe work; and the call for state assistance in times of desperation, as offshore manufacturing increases and domestic jobs disappear, remains a struggle based on class inequalities and resistance to exploitation. Capitalists continue to seek reduced costs, taxes and tariffs and to engineer instruments that allow them to maintain and increase their property and monetary wealth. Workers hope more simply for jobs, homes and food for their families, maybe retirement at 65. But modern capitalist economics continues to be based on long term exploitation of natural resources, the environment, workers and the working class.

The extreme accumulation of wealth using legal (if immoral) instruments while elsewhere in the country and the world, people starve, highlights the contradictory -and ultimately destabilising- nature of capitalist exploitation. But every time there’s a headline that highlights the ‘antisocial behaviour’ of a minority, a beneficiary, a homeless person or an addict, there’s an implicit judgement condemning the poor and poorly functioning citizen for failing to contribute economically and for bringing the capitalist model into disrepute. Having a residual pool of labour is one thing, but we don’t want them ‘sponging off the government and the taxpayer’ or living in state houses in wealthy suburbs or making our streets look untidy when we’re shopping on the high street.

You will read about the negative impacts of the demands of workers, or the burden of the poor or poorly educated, on society, but you won’t read a critique of the wider conditions that created their poverty or the indignities they suffer in poorly paid jobs or overcrowded houses, or when dealing with state agencies. The class struggle will continue in both the workplace coal front, but also in the media as the ideological apparatus of the capitalist elite promulgates its distractions and disguises and continues to blame the class victim instead of the cause – the class structure itself.