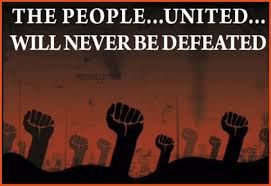 A young paid union official presented her flag to a Living Wage activist at a recent festival asking that someone take it to future events in case she couldn’t make it herself.   The standard was raised high but the bearer has departed.

Far from unique this story must resonate with many movements for change in our democracy and it is the challenge we currently face of organising through individual commitment or representation in a hollowed out civil society – gutted by under-funding and regulatory constraints; often out-manoevered by the funding agencies that have designed service contracts gagging freedom of speech in exchange for money.

Thousands of citizens, like me, try to impact on decision-makers, like Councils, all the time and yet we struggle to make them listen. Tragically, there are daily examples of this. I marched down Queen St to oppose the TPPA  in the single biggest mobilisation of citizens for many years – the issue resonated across diverse communities – and yet our voices were not heard. It took extraordinarily hard work by many, social media saturation (for those on social media), well-researched argument and powerful articulate proponents opposing the treaty, and yet we got no traction with those who needed to listen and understand an issue that touched the hearts of hundreds of thousands of New Zealanders.

Influencing the government funders of wages at Auckland Council has met the same wall of resistance.  Hundreds of submissions in the last two years calling for a Living Wage for directly paid and contracted workers in that Council’s never-ending cycle of meaningless consultation, have been met with silence about the importance of decent wages in plans associated with the future of the “world’s most liveable city.” Voices are being raised all across NZ but we live in a democracy where millions of dollars are invested in public consultation while decisions are made in a seemingly parallel universe behind impenetrable fortresses of bureaucracy.

E tū member Lupe Funua is an Auckland Council cleaner with a young family who says she wants to feed and clothe her family but everything is too expensive.  She has the apparently sky high ambition to want to save so her children can get an education.  Hers is a heartfelt plea that will fall on deaf ears.   She can’t make headway earning just above the poverty minimum wage of $15.25 per hour.  It is a heartfelt plea by a real worker in the real world of struggle employed by a public institution with the power to change that.  Yet that institution distances itself and oversees growing inequality where now there are almost exaclty as many people on more than $100,000 per year as there are on less than a Living Wage of $19.80 per hour (1912 above; 1840 below) and where an astonishing  $60,000 pay increase for the chief executive this year must somehow have been deemed reasonable. This is the same CEO, Stephen Town, who said the “ramifications” of allowing Albert Eden swimming pool attendants to be paid a Living Wage would “have untenable consequences for me as the employer of council staff.” (NZ Herald). That is somehow deemed reasonable too.

Where institutional power is so comprehensively unresponsive to the citizens, the voices of opposition must be organised and that organisation sustained.  Calling our elected leaders to account takes resilience and that means grounding organisation in institutions – the institutions of civil society: workers through unions, congregations through churches and communities through the diverse groups that seek to mediate the challenges facing citizens in a modern world, such as the Migrant Action Trust and Papatuanuku Kokiri Marae.

An organised voice is not a flag without a bearer, it is not even a duly elected representative with a flag; it is the sustained commitment of an organisation to educating, leading and repeatedly mobilising large numbers of people around the issues that we all care about in the hope that the power of that collective force will enable citizens to penetrate the fortresses of our modern democratic institutions, such as Auckland Council, so Lupe, and others like her, can realise their dreams.