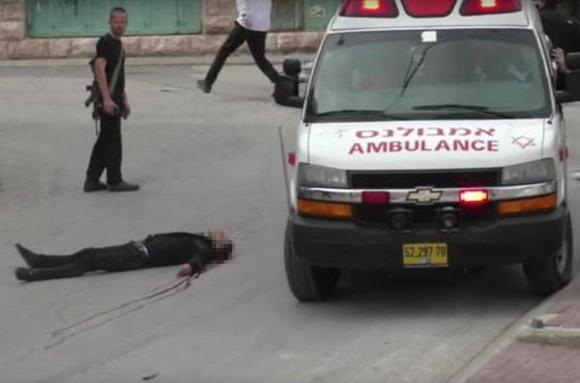 In some imaginary Middle Eastern country, a town with a large Jewish population was occupied by a heavily armed Arab military presence. Now imagine a video being secretly made of an execution of a young Jewish man, who allegedly attempted to stab one of the Arab soldiers, lying on the ground badly wounded. The video then shows one of the soldiers walking up to the man on the ground and shooting him in the head, while other soldiers, and heavily armed Arab ‘settlers’, stand around watching. Then imagine the video getting into the hands of a human rights NGO and becoming public . The Arab population of our imaginary country hails the soldier as a hero, even though the UN Special Rapporteur on extrajudicial, summary, or arbitrary executions, describes the killing as having, “All the signs of clear case an extrajudicial execution.’

Would this fictional incident make headlines in every Western country including our own? Would it ever!! All of our newspaper & radio reports would tell us the name of the shooting victim, his age, papers would print his photos., we’d learn about his grieving family.

Opinion makers would be jumping up and down shouting how Arabs are inherently violent!

It so happens that just a few days ago, on 24 March, a real execution took place, by a soldier, of a badly wounded young man lying incapacitated on the ground after allegedly taking part in a stabbing attempt. The incident took place in Hebron in the West Bank. An IDF soldier executing a local Palestinian, Abed Fatah al Sharif, was filmed by a nearby Palestinian shoemaker who is now receiving death threats. The words quoted above were by Special Rapporteur Christof Heyns who added, “Whatever legal regime one applies to the case, shooting someone who is no longer a threat, is murder.”

The United Nations Special Rapporteur on extrajudicial, summary or arbitrary executions, Christof Heyns today expressed his outrage at the killing of a Palestinian man by an Israeli soldier on 24 March in Hebron, West Bank, as he laid incapacitated on the ground following his alleged role in a knife attack.

Footage of the shooting of Abed al-Fatah al-Sharif was released by the Israeli human rights organization B’Tselem, and others have subsequently also posted similar videos on the Internet.

“The images shown carry all the signs of a clear case of an extrajudicial execution,” the human rights expert stressed. “There does not appear to be any provocation on the side of the gravely wounded man.”

“Whatever legal regime one applies to the case, shooting someone who is no longer a threat is murder. It is furthermore troublesome that this was done to no apparent alarm to the other soldiers who were nearby,” Mr. Heyns said.

The Special Rapporteur expressed further concern at the decision of the medical personnel on the scene to ignore Mr. Abed al-Fatah al-Sharif and attend only to the injured Israeli soldier, who had sustained light injuries.

A poll conducted for an Israeli TV channel showed 57 percent of Israelis opposed the arrest of the soldier who did the shooting.

Is any of this story going to be covered by our media? Of course not , get real.

Some stories are best kept quiet. It’s an accepted Western concept that some lives matter and some do not.

Our media would perhaps justify their silence by claiming that there is no public interest in this story. But I have a Dunedin Quaker friend, a very brave woman, who, as a member of Christian Peacemakers, has spent time in Hebron, notorious for its violent religious fundamentalists, many with Brooklyn accents. I am aware of at least 3 other Kiwis, including myself, who have been to Hebron. The ‘settlers’ and IDF are openly violent there and will continue to be so as long as the West looks the other way.

Lois and her husband Martin are retired teachers who are particularly concerned about the situation in historic Palestine, having been there several times, meeting Palestinians and Israeli human rights activists who desperately want the outside world to hear their narrative.