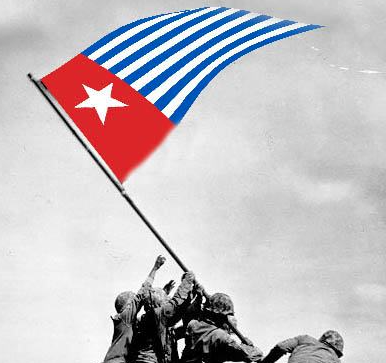 It is great to watch the Solomon Islands establishing itself as a champion of human rights for West Papua.  Prime Minister Manasseh Sogavare, current Chair of the Melanesian Spearhead Group, nailed his colours to the mast at the UN General Assembly last year and now he is on a determined diplomatic offensive around the region.    Solomon’s diplomat Barrett Salato used his slot at this month’s Geneva Human Rights Council to plead for Indonesia to address a litany of human rights issues in West Papua – torture, arbitrary arrests, limitations on freedom of expression, racial discrimination and demographic marginalisation.

Peaceful resistance has escalated in West Papua over the past year, spurred on by feisty  West Papua campaigns  all around the Pacific.   In the diplomatic arena, the Melanesian Spearhead Group (MSG) agreed to grant observer status to the West Papua umbrella group: United Liberation Movement for West Papua (ULMWP).  This was rightly welcomed as an important win even though   the MSG leaders made concessions to Indonesia at the same time – granting Jakarta Associate Membership of the MSG and qualifying their acceptance of the ULMWP by saying it represented Papuans in exile.

Jakarta has been trying hard but unsuccessfully to counteract the MSG move.     First it announced a kind of alternative to the MSG – A Melanesian Brotherhood that would include the Indonesian provinces in Maluku and West Timor as well as the two provinces in West Papua. That got off to a shaky start when the Papua Governor Lukas  Enembe described it as a political ploy and declined to attend the signing ceremony.

In February,  5000 people gathered to give their support to a new office for the ULMWP in Wamena  in the Highlands.  Indonesian police promptly took the ULMWP sign down and began to threaten and intimidate the activists who had organised the event. Father John Djonga, who led the prayers at the opening ceremony,  has been subjected to lengthy  interrogation by the police.  The participants knew it was a risky venture but they decided it was important to make sure the MSG and the world knew the ULMWP was not just an organisation representing exiles.

Mr Sogavare welcomed the new ULMWP office and he has been on a tour in the region discussing the idea of a mediated dialogue between Indonesia and West Papuan representatives.    When he first asked for a meeting with Indonesian President Joko Widodo he was turned down, but he now has  a visit to Jakarta scheduled for April. Sogavare is insisting that if Jakarta wants to be an associate member in the MSG if it needs to work with the MSG members on an issue that concerns them all.

Signs of hope?   My favourite  t-shirt  which features   the West Papua Morning Star flag is a bit  out of date –  the slogan reads  ‘15 years in jail for raising this flag’. That is a reference to Filep Karma who was jailed by the Indonesian authorities on a charge of treason in 2004 because he took part in a peaceful flag- raising event.  He was sentenced to 15 years, but  granted early release  last November.    Karma was actually reluctant to leave jail because he did not want to accept any remission of sentence that implied he had committed a crime.  Outspoken and fearless, he is revered by supporters of freedom at home and abroad.   Amnesty International  accepted him as Prisoner of Conscience and it can take a big share of the credit  for embarrassing  Jakarta and bringing about his  release.

While Karma’s release is definitely a good sign, it is too soon to say that  Indonesia is relaxing its   repressive rule in West Papua.   International journalists still face huge impediments to their access.   Last year we were lucky to have excellent on-the-ground reports from Maori TV and RNZ  International,  but then a French journalist was barred because the  authorities did not like the content of a documentary he had produced earlier.

Indonesian rule over West Papua was sanctioned by the west back in the Cold War sixties. To  their  discredit, New Zealand and  even the UN turned a blind eye as Indonesia staged a fraudulent ‘Act of Free Choice’ in 1969.  Only  1,022 press-ganged and intimidated Papuans participated.   With the international community seemingly indifferent , a  guerrilla resistance movement took on the Indonesian military.   Over the years some 100,000 have died conflict-related deaths, but now the people are seeking peaceful ways forward.

Last year the Pacific Island Forum proposed a fact-finding mission to West Papua and so far Jakarta has not given its answer.  Sogavare is hoping for an independent mission, one that could begin to address the issues set out in the two volumes of human rights reports which have been put before him and the MSG.

Prime Minister Key could take a leaf out of Sogavare’s book.  New Zealand should let the Indonesian authorities know we too are 100 per cent behind the Fact Finding Mission and we expect a positive answer.  Small steps can lead to big change.