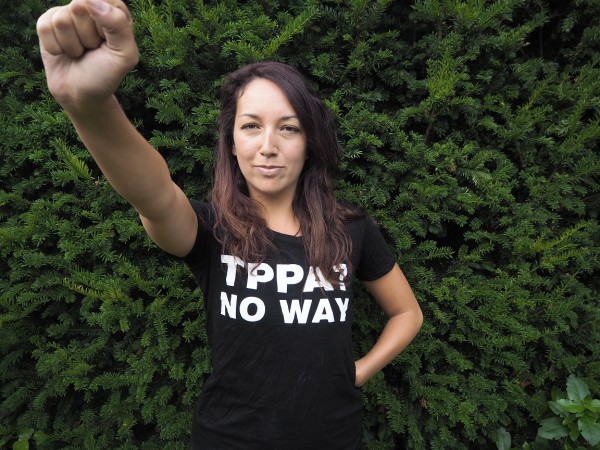 About ten minutes later the road show broke for lunch, so I went and grabbed a water pistol (onsite from our thwarted original action idea), and eagerly waited at the gate for one of the villains to exit the premises. I was rewarded rather quickly, as an MFAT officially approached me almost immediately. He smiled, laughed and said “before you shoot me can I please explain to you why the TPPA is so good”. I said cheekily to him “you can try!” He went on to tell me that the TPPA is so wonderful for New Zealand and that we need to be in it to win it, wank wank wank. I smiled at him and yelled “not good enough!” and squirted him, a lot, in the face with the water pistol. It was all very friendly, and we both had a good laugh. Suddenly I was grabbed from behind by a police officer, I had my arm twisted behind my back, heavy flexion put on my wrists and was marched down the street. He shouted at me “you are under arrest for disorderly conduct!” I was incredibly shocked by this heavy handed approach to a bit of playful protest. The MFAT official came over and told the police officer that it was fine, and that he most certainly did not want to press charges. Our film crews came over and started recording. The police officer continued to put heavy flexion on my wrists, repeating that I was under arrest. I asked him to please loosen his hold on me because he was hurting me. He ignored me. I appealed to him again and said that I was not resisting or any risk to anybody, and would he would please stop hurting me. I reminded him the cameras were recording everything, and that he was potentially about to make a martyr for our cause by arresting me. He confirmed that the MFAT official did not want to lay charges, and then let me go, telling me to “pull my fucking head in”. It is worth noting that apart from this specific police officer, all of the police on site were polite and pleasant, and seemed supportive of our cause.

From my observations today these roadshows labelled as public consultation were actually heavily enforced propaganda missions dead set on annihilating any public discussion. They were policed and secured to such a high level, one has to wonder if this ‘trade’ deal is so great for our country why on earth would 30 police and 40 military personnel be required to protect a presentation about it? The vast majority of New Zealanders remain staunch against this absolute violation of our sovereignty, and the government are frightened. We can and we will still stop this. As with any movement, things need to gain momentum to continue progressing and growing. If we look at previous successes such as the Suffragettes, the Civil Rights Movement, the Springbok tour, Nuclear Free NZ, it is clear that direct action and strategic civil disobedience are required. Every time you see a National MP, every time John Key tries to come to your town, I strongly encourage you to stand up and let our ‘dear leaders’ know that if they try to trample on our country and our human rights then they are no longer welcome here!