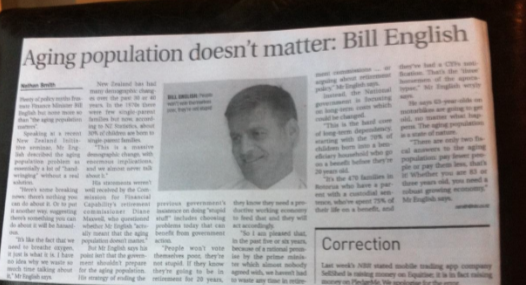 I am becoming more worried as time goes by that we are heading for a demographic pensions disaster.

The more government refuses to talk about NZ Super, the more the opposition also fall into line with endorsing the status quo, the sharper, less well-judged, more distributionally unfair, any inevitable correction will be.

In the 1990s, the age of eligibility was raised by 5 years over just a decade, an incredibly fast rate of change with little warning. My concern is that we are heading the same way as it becomes ever more apparent that NZ Super spending is on a runaway track at the same time as social services spending of all kinds are impossibly squeezed and the government is obsessed by tax cuts.

So how best to save costs in superannuation?  It is almost impossible in this country to discuss any form of clawback of NZ Super from the top earners who clearly don’t need this generous universal payment.  But as no-one wants the level to be cut which would recreate elder poverty, or the link to wages removed, raising the age is about all that is left.

What is different in the 2010s compared to the 1990s? Can’t we just shove the age up to 70 so as stop payments to those reaching 65 and still working?

What is different, sadly, is that the employment prospects for those over 50, especially older women have become bleak. As the UK lifts its age for women to 66 there is groundswell of alarm in that country:

“Clearly, something has to give in a state pension system never designed for 21st-century life expectancy. Living longer inevitably means working longer too. But that’s no help to older women who can’t just grit their teeth and work longer as a result of Osborne’s measure, because they’re not even working now: women made redundant late in their fifties, who can’t persuade employers that they’re not past it; women who are sick, or caring for sick partners, or who retired early thinking they could live off their savings for a bit and now realise the money won’t stretch until the pension comes in.”

Insecure periods of work can make it a pipe dream to pay off the mortgage or even to own a home. Women are often affected by care duties to their children and to their parents and many of those currently in their 50s and 60s will not reach retirement in a healthy financial state. Recovery after divorce redundancy, and ill health can often decimate the retirement pot. Some women have not even taken out KiwiSaver or are not contributing. In any case, KiwiSaver wont be the answer for women without traditional male career paths as social provision tied to paid work does not work well for them.

“It is already the case that rates of home ownership have declined in a structural way – that younger people have substantially less chance of owning their own home than people their age did a generation earlier. This decline applies as much to younger baby boomers as it does to members of Generation X which is following them. This decline will mean that more and more people will reach retirement without the security and imputed incomes which come about through home ownership and lower housing costs. The adequacy of current retirement income entitlements to meet the housing and living costs of this growing group of older tenants is already being tested. Evidence of this pressure is available in the rising proportion of those people receiving the Accommodation Supplement who are also receiving New Zealand Superannuation. The forecasts offered here suggest that this current demand for supplementary income is a tip of an iceberg – this demand will grow as younger baby boomer cohorts reach retirement age.”

Treasury warns that demographic change associated with ageing produces marked fiscal pressures from NZS and Healthcare.  The day of reckoning is close and some rational discussion would be nice. May be an apolitical taskforce could examine all the issues.

Over the years I have changed my mind about raising the age. I believe it would be much better to pay NZS as a basic income with a tax scale for additional income. By doing so we could save at least 10% of the costs, see suggested reform without hurting anyone. Most would see no or little difference in their weekly disposable income while those who earn a great deal are unlikely to notice the effective loss.

We know that technology is rapidly destroying jobs as society’s material needs become more efficiently met and the demand for labour falls.  Yes, this time it does seem to be different and it looks like technology will not magic up enough jobs as it has in the past. This is a huge opportunity to give those that desire it, more free time. Thus the age for NZ Super might actually be usefully lowered over time as the idea of a basic income takes hold, releasing more women (and increasingly men) from the drudgery of paid work to do the creative and caring work that they would like to do and that is valuable to society on many levels. Such an approach of course would not discourage an older person from supplementing  their unconditional basic income when appropriate with casual, intermittent or part-time paid work.