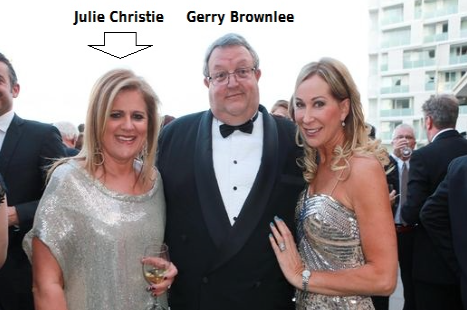 In June last year, as news of the cancellation of Campbell Live rocked the nation, I reported on possible conflicts of interest between Mediaworks’ programming decisions, and one of it’s board members, Julie Christie;

Just when you thought Mediaworks couldn’t possibly dumb-down their television service any further; 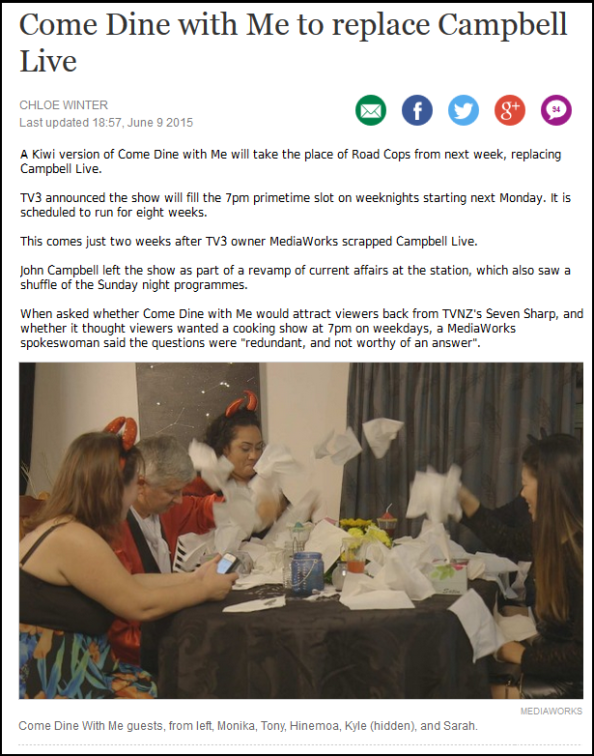 When I first heard this, my initial reaction was someone on Facebook, with a wry sense of humour, was playing ‘silly buggers’ at Mediaworks’ expense.

Then I was pointed to the media report on Fairfax’s website.

Honestly – how does one react to a decision like this? Deep sobbing tears and face-palming – or maniacal laughter that might do The Joker proud?!

If this is Mediaworks’ idea of a joke – exacted against Campbell Live supporters as revenge for daring to question executive decisions – then someone has a rather cruel, demented sense of humour.

If this is what passes for sound business decision-making in Mediaworks’ boardrooms these days – then their next round of bankruptcy will not be far away. I’m picking three months.

Whoever was responsible for this awful programming decision would be wise to never, ever admit  their part in this insanity. Their career would be in tatters if word got out. To quote a Mediaworks press release describing ‘Come Dine With Me‘;

“Week one features Monika, a Slovakian child carer, who’s all about silly with a side of spice; Tony, an eccentric real estate agent with some cutting critiques and a few ‘endearing quirks’; Hinemoa, a part-time tattooist and full-time eyebrow enthusiast; motor-bike riding, insurance broker Kyle; and stylish yoga enthusiast Sarah.”

Perhaps an answer to this incomprehensible decision to replace a highly successful, well-respected current affair show like ‘Campbell Live‘ with another (and somewhat gormless-sounding) “reality” programme lies with Mediaworks’ board member, Julie Christie. 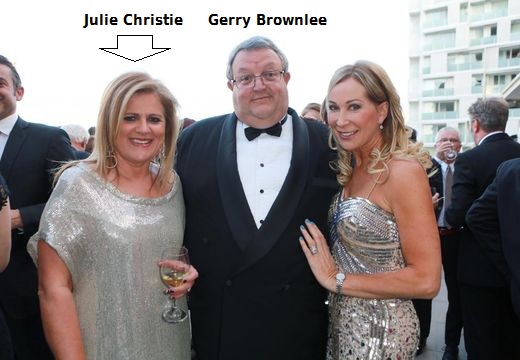 “Politicians have also had a strong affection for her over the years. Murray McCully and Gerry Brownlee have been photographed out and about at her bar in the Viaduct.” John Drinnan, 15 February 2013

In 1991 Christie founded television production-company, Touchdown Productions.The company was responsible for “reality” (aka “unscripted television“) programmes such as ‘My House My Castle’, ‘Whose House Is It Anyway’, ‘DIY Rescue’, ‘Trading Places’, ‘Treasure Island’, ‘Game of Two Halves’,  ‘Pioneer House’,  ‘Dragons’ Den’, and others.

Julie Christie quickly acquired a reputation for being New Zealand’s own television “Reality Queen“, as TV3 itself described her, two years ago;

More on Christie’s involvement with reality-TV and TV3 in a moment.

In February 2006, Touchdown was sold to Dutch media group, Eyeworks. She remained as CEO of Eyeworks NZ until 31 October 2012, when she resigned. Eight months later, in June the following year as Mediaworks was put into receivership, Julie Christie was appointed to the board of directors.

There is no telling how much earlier  Christie’s June appointment had been planned by parties involved, though this had been tipped by NZ Herald media columnist, John Drinnan four months earlier.

Julie Christie remained closely involved with the company, as confirmed by Eyeworks on their website;

There is indeed a strong, formal link between Christie and Eyeworks.

The directors of Eyeworks New Zealand Ltd are;

Christie has a separate company, JGM Investments Ltd, whose directors happen to be;

And JGM Investments No2 Ltd, whose directors are also;

Christie’s JGM Investments No2 Ltd company is described as;

By “coincidence”, the New Zealand version of ‘Come Dine With Me‘ – which has taken ‘Campbell Live’s‘ “plum” 7pm time-slot – is produced by none other than – Eyeworks NZ.

Eyeworks was not wrong when it stated that Christie “remains connected to the Eyeworks Group”.

Not exactly conspiracy theory stuff – but a possible conflict of interest?

For full story, see related blogpost: Blogger threatened with lawsuit over questions of conflict-of-interest regarding Mediaworks

Written questions put to Eyeworks and Mediaworks on this issue went unanswered. Instead, Rod McGeoch, Chairperson of Mediaworks, responded with a thinly-veiled threat of legal-action for defamation.

On 14 February, this story appeared in Fairfax’s Sunday Star Times; 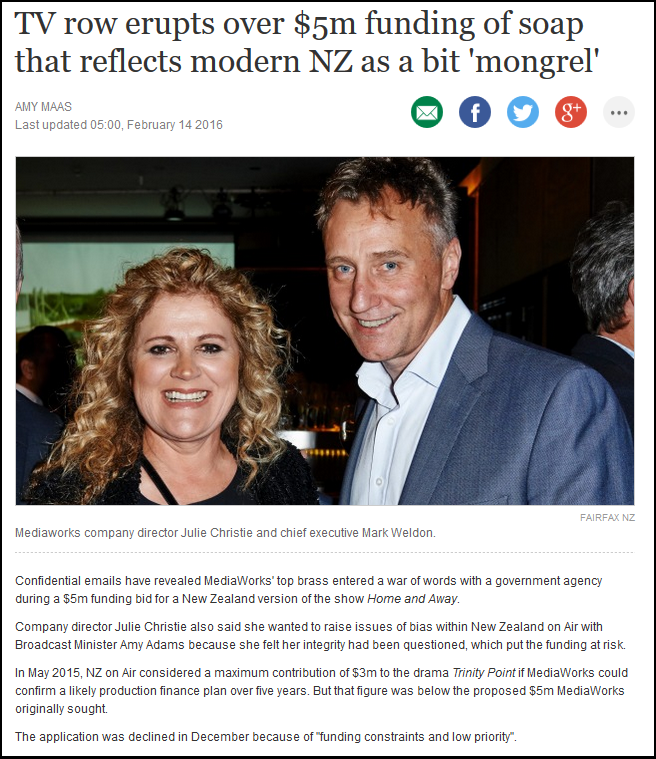 Journalist Amy Maas reported that NZ on Air has rejected an application for a Mediawork’s soap opera;

The funding pitch proposed the drama would run five nights a week at 5.30pm. The concept pitched to NZ on Air said Trinity Point was a fictional mid-sized beach town, 90 minutes north of Auckland “and one of the last bastions of the Kiwi dream”. It would feature a white-sand beach and an estuary, the main road of the town would host a Santa parade, Dawn Parade and feature a large Four Square supermarket.

Confidential emails sent six months before funding was declined, and obtained under the Official Information Act, revealed Christie accused NZ on Air board members of questioning her integrity because she used to own Eyeworks/Warner Bros NZ – the production company awarded the proposal to make the drama, despite 50 other applications.

Christie was not impressed, and was scathing in her response to NZ on Air;

After a meeting between MediaWorks and NZ on Air board members, Christie emailed chair Miriam Dean saying: “Your management continues to use this as one of the reasons to decline the necessary level of funding for MediaWorks’ serial drama to proceed”.

“I am assured by leading drama producers in our industry that the only people perpetrating this rumour are your own management and, as a result, TVNZ who are now gleeful that they have been successful,” Christie wrote.
Ad Feedback

Christie pointed out that not only did she not have any conflict with the potential producers of the show, she had not worked there for nearly three years and had sold the company seven years ago. She said she had not even met with the current Warner Bros NZ owners.

However, Dean said it was necessary to question her because she previously owned the production company, and her brother, Michael Molloy, was a director of Warner Bros NZ. But “after appropriate probing”, Dean said NZ on Air found there was no conflict, but she could not provide any evidence that the other production companies had expressed concern.

Evidently, charges of conflict of interest had come from several sources;

But in the June 2015 exchanges between Christie and Dean, the NZ on Air chair explained that some of those whose proposals had been rejected had raised the issue of a potential conflict of interest with it being awarded to Warner Bros NZ.

“The complainants expressed their concerns in confidence by telephone, with no records taken. Several production companies conveyed a sense of disquiet regarding the selection process to the effect that, despite the [request for proposals], the outcome was predetermined.”

Christie then referred to her close connections to various government bodies;

In her emails, Christie made a point of mentioning that she currently sat on three government boards, New Zealand Trade and Enterprise, New Zealand Story Board and the Flag Consideration Panel, and had a “deep knowledge of responsible public funding”.

“It is clear that the Government considers me to be a board member of the upmost integrity. I was awarded ONZM for services to film and television. Yet, NZOA continues to suggest I would behave inappropriately.”

And then, to drive home the point of her and Mark Weldon’s “connections” to the National government, threatened NZ on Air;

Christie said she would like to bring the matter “to the attention of the minister”.

Christie’s and Weldon’s close relationship with National is a matter of record, as pointed out in this story by Rex Widerstrom, in the Daily Blog; Thirteen things you (probably) didn’t know about Mark Weldon (CEO of Mediaworks. 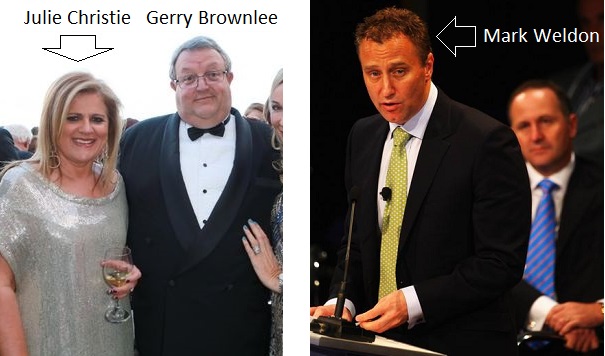 Mark Weldon also lashed out at NZ On Air;

During the mud-slinging, MediaWorks chief executive Mark Weldon also waded in to the debate with a terse email to NZ on Air’s chief executive Jane Wrightson, accusing them of prioritising funding for TVNZ programmes.

In the email he wrote that he “had someone do some work” on the discrepancy between funding received by both TVNZ and MediaWorks. He pointed out that TVNZ had been awarded $27m in the last funding round, compared to MediaWorks’ $4m.

“Looking at the documentation, it does not appear to be the case that you have budget constraints … It is clear that you do have budget choices.”

As I wrote last year;

I seem to have “touched a nerve”. When thinly-veiled threats of defamation lawsuits start flying, it suggests that someone finds the tenor of questioning to be uncomfortable.

To make it crystal clear for Mr McGeoch and his 40 year old lawyering career, I am asking questions, not making assertions. It would be a fairly simple matter to refute the questions with simple answers.

Thus far, no refutations or clarifications have been forthcoming.

However, an apparent conflict-of-interest still remains to be addressed by Mediaworks. Especially when the programme that replaced ‘Campbell Live‘ was created by a company – Eyeworks – with which Julie Christie is still associated, and whose Board members also sit on two companies with which Christie is involved with.

The perception of murkiness in all this cannot easily be overlooked.

There is no telling how Christie has benefitted from Eyeworks acquiring the contract to produce ‘Come Dine with Me‘. But what we do know – from Eyeworks’ own admission – is that Christie continues to “remain connected to the Eyeworks Group… working in an international creative role”.

Whilst Christie is no longer a Director of Eyeworks, she is still closely associated with two  Eyeworks Directors via two other companies.

We do not know how Eyeworks acquired the contract to produce ‘Come Dine with Me‘. But we do know that Christie is on Mediaworks’ Board of Directors.

We do not know what role Christie played in the production of ‘Come Dine with Me‘, except;

The 7pm-7.30pm time slot is prime time, and a lucrative slot for advertising within programmes, as  Rod McGeoch, Chairperson of Mediaworks, stated candidly on 11 April 2015;

For Eyeworks to produce a product and schedule it at prime time would have meant a profitable exercise for the company. That required, first of all, to get rid of ‘Campbell Live‘, thereby leaving the slot open.

It has taken nearly eight months, but after my initial findings, this story has finally been reported by the msm.

TV3 “News”: Come Dine with Me launches on Monday 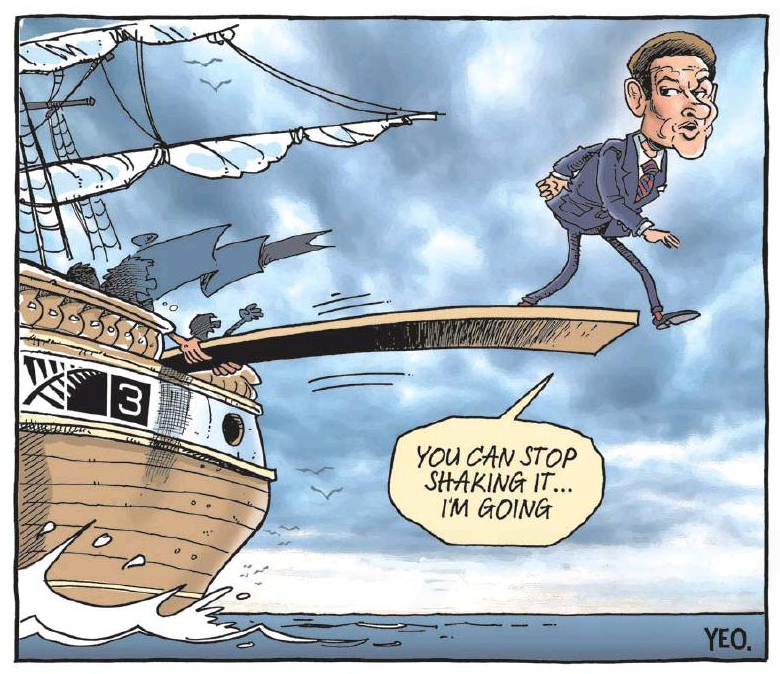