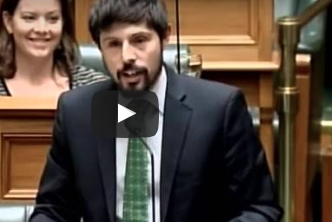 Prime Minister, I’ve sat and listened to all your speeches opening Parliament and I’d like to congratulate you on delivering your 8th speech.

It’s a real accomplishment and you must be now thinking how history will remember you.

Just outside of this debating chamber are the portraits of our great leaders.

From Seddon, to Savage and Fraser to Kirk how do these giants who established universal suffrage, a caring state in the midst of a depression and world war and a modern independent, bicultural New Zealand compare with you?

Is the flag it?

Your desperate, lumbering, grasping attempt at building a legacy with a flag won’t mask the realities.

Once you may have been a national leader but now you look like just a National Party leader.

Once you attacked the nanny state of efficient lightbulbs but then presided over the most wide reaching mass surveillance state in our country’s history, passed the Skynet law, sacked elected councils and then refused elections.

You’re our first selfie PM, our first comedian PM – a derping, planking, rape-joking expert at getting us on late night American comedy shows.

At a time of growing inequality, rapid global change and systemic economic problems we got basically a chilled out entertainer.

On Election night 2011 you first thanked your pollster.

You are our most poll-driven PM ever, yet after all these years we still don’t know what you stand for bar the jokes and three line slogans.

Do you see more for New Zealand than just China’s dairy farm and America’s spy station?

Prime Minister, why, just last week, on our national day did you run from debate at Waitangi – once again into the arms of rugby players.

To the 300,000 kids growing up in poverty are you saying ‘Ask not what your country can do for you but what you can do for Serco, Sky City, Saudi Sheiks, Media works, Warners, and Rio Tinto?’

Under your leadership scientists have been ridiculed and silenced and NGOs have had their funding and voice cut.

Rape crisis centres are closing and food banks are doing a brisk trade.

Kiwis are noted for their generosity and hospitality but Prime Minister, under you, New Zealand has become more welcoming to oil companies than refugees.

Whenever there is a Government scandal, extreme benefit measures are floated, and ‘look over there – pandas.’

Prime Minister, you may not have a plum in your mouth like your hero Holyoake, but you’re exactly the same – an arrogant, born to rule, out of touch, short-term, kick the can down the road style of leadership.

You delivered tax cuts the country couldn’t afford and leave $120 billion in debt, a superannuation crisis, crippling student loans and a generation locked out of home ownership.

You might call that a legacy, I call it intergenerational theft.

Once, we were one of the richest nations in the world. Now Kiwis work some of the longest hours, for some of the lowest wages and pay some of the highest costs of living in the developed world.

After selling our assets you are now selling out our sovereignty to corporates and the Hollywood industrial complex.

Your small army of spin doctors tell us again and again you grew up in a state house but now that you’re on the 9th floor you’re even selling them too.

But you seem like a good guy to have a beer with. No one else in this room could have got away with your stunts, gaffes and antics.

How have you gotten away with it? We could ask Crosby and Textor and point to the biggest of big business bucks and the dirtiest of dirty tricks operations in New Zealand history.

Kiwis are a good people, a caring people and we can reclaim our democracy from big money and dirty politics.

One of your legacies is what you cynically call the rent a crowd is growing into a real political movement for change.

Another legacy of your term is a Green Party stronger than ever before. Thank you Prime Minister.

Prime Minister as you reflect this may be one of your last opening speeches to Parliament I have no doubt you will go down in history as one of the most successful politicians of a generation. By ‘politician’ I mean the way it’s written on the Stuff comments section.