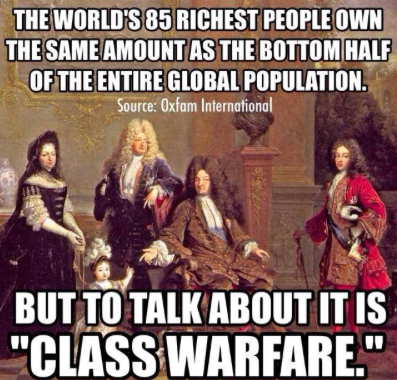 The explosion in information available about the extent of inequality in the world naturally raises the next question – what can be done to combat it.

The right wing appears to have given up the argument that this is simply the natural order of things that we all will benefit from eventually. The ‘trickle-down’ theories have simply been demolished by life.

Major economic institutions like the IMF that defended the policies that accentuated the growth in inequality over recent decades have shifted course. They now issue reports arguing that too much inequality hinders economic growth.

IMF Managing Director Christine Lagarde summarised their conclusions in a speech last year: “You do not have to be an altruist to support policies that lift the incomes of the poor and the middle class. Everybody will benefit from these policies, because they are essential to generate higher, more inclusive, and more sustainable growth,” Lagarde declared. “In other words, if you want to see more durable growth, you need to generate more equitable growth.”

The IMF policies haven’t actually changed very much at all. But they claim they will lead to more equitable outcomes for some reason that is not clear to me.

More traditional social-democratic ideas for modest wealth redistribution are now being resurrected as a necessary step to “save capitalism from itself” to use the words of one prominent advocate Robert Reich in the US.

Essentially this involves ending tax havens, increasing some taxes on the very rich, breaking up the big banks and expanding social protections. The more radical of them argue for nationalisation of the big banks and a Universal Basic Income (UBI) to protect the poor.

The current leader of the UK Labour party was elected on an anti-austerity programme by arguing for many of these ideas. Similarly the candidacy of Bernie Sanders for the Democratic party nomination in the US presidential election has received huge support by arguing for a radical redistribution of wealth and power in US society.

I think we need to support any measure that seeks to put taxes on the wealthy few and remove them from labour which (along with nature) is the source of all wealth creation in society.

But so long as we have have a competitive, dog-eat-dog capitalist system then the tendency to centralise and concentrate wealth will continue with irresistible force that ultimately will overcome all barriers that governments try and establish.

Capitalism is also a system of commodity production for sale at a profit. There are simply too many linkages in that process that can go wrong for the system to escape its tendency towards crisis. And the longer the system survives the greater those threats become. Today the global economy remains at risk of a renewed global recession/depression without really recovering from the worst crisis to hit the system since the 1930s. The system of production for profit also threatens the ultimate source of life itself – mother earth.

Because the system is based on production of commodities for sale the capitalists do not actually care who buys their product. The worker can buy food to eat, the professional can buy a house, the capitalist can buy a private jet. The capitalist can also buy buildings and raw materials for expanded production. That is why I don’t buy into the “Left Keynesian” arguments that it is simply not enough demand from workers that creates problems for capitalism. Expanding workers wages to purchase the products of capitalists is not a “solution” if it reduces middle class purchases or capitalist investments. Higher wages also ultimately impact on the rate of profit which is a key barometer of capitalist health.

There is also a conservative argument in favour of the Universal Basic Income that is essentially along these lines. The pro-capitalist supporters like Reich see it as necessary to maintain incomes of the working class poor who have lost higher paying industrial jobs that and have been thrust into a more precarious existence juggling several minimum wage, part time service jobs to survive. They essentially accept that there is nothing much that can be done to prevent that. But we can minimise its impact by having the State pay a UBI that can maintain a consumer market for capitalism among the poor. In this world view the capitalists are free to eliminate as many jobs as they like with the new technologies that are becoming available so long as we have a UBI to prevent complete destitution. Some like New Zealand’s own Gareth Morgan argue that you don’t need a minimum wage with a UBI.

I support a UBI for different reasons. I agree that it is important to protect people from the ravages of capitalism as much as possible. This includes socialised health care and education as a right. Welfare is needed for people who are sick or invalided in some way. Living allowances are needed while in tertiary study. Pensions are needed for the elderly. A UBI is a simple and effective way to do all of that with the least cost and without punitive barriers or stigma associated with access.

In addition I believe a UBI will strengthen workers bargaining power with their bosses – both at an individual level and collectively. An individual is more able tell an abusive boss to just stick it if they have access to means of support till they find another job. Collectively workers can more readily afford to strike for improvements as well if they have this available as of right.

This will also strengthen workers position to challenge the precarious existence being imposed on us rather than accepting it as somehow an inevitable consequence of technological development.

Capitalism will continue to produce a world of instability for working people so long as it exists. It can only be replaced by the collective action of the big majority of the population acting together to create a new society.

That new society will take democratic ownership control of the finance system and the major monopolies and use that control to lead investments according to a democratic plan.

Before that day arrives there will be a contest of power within capitalism.

Working people need to fight for demands that can expands their power and make it easier to resist what capitalism wants to impose.

Demands to reduce inequality that are simply abstract appeals to the rich and powerful to wake up and do the right thing are simply a waste of time. The ruling elite does not care that they are destroying humanity and the planet.

The left needs to popularise a programme for political, economic and social changes that empower people as much as possible. That begins with strengthening unions and their bargaining power.

It means forcing business to pay a living wage. The minimum wage should be set at two-thirds of the average wage as it once was in this country. Zero hour contracts should be outlawed. Overtime rates should be mandatory after six hours a day or 30 hours a week. Unions should have the right to enter workplaces for recruitment in paid time. Annual leave should be extended to six weeks. These measure would radically “pre-distribute” income and wealth in a progressive manner rather than wait for a government to redistribute later. Workers should have the absolute right to strike to get a contract, to enforce a contract, and in solidarity with other workers in struggle.

We should also be looking at ways to empower people in their own communities. The examples of real “peoples power” seen in recent upheavals in Egypt, Spain, Greece, the Occupy Movement, Wisconsin, and many others show that people want forms of more direct democracy rather than simply voting every three of four years for someone to misrepresent them.

We should be looking to create our own media, culture and sport rather than leave everything in the hands of big business.

We should be learning the positive and negative lessons from heroic attempts being made in Latin America (especially Bolivia and Venezuela) to use governmental power to confront imperialism and empower workers, farmers and indigenous communities in a new and creative way for what they call a 21st Century socialism.

But at all times we must explain that these are only transitional measures.

They are designed to protect the big majority by progressively taking power our of the hands of a small minority of super rich parasites.

They are not designed to make the system work in our interests. That is a naive and utopian dream. Many of the measure proposed will in fact undermine one of the key elements of the capitalist system which is production for profit. If the capitalists fear they may not be able to make as big a profit as they desire they will use their economic power to resist. The government of Venezuela has been victim to precisely this type of sabotage with hoarding of goods, investment strikes and so on.

Only a government willing to mobilise the power of working people to take economic power out of the hands of the capitalists can actually succeed.

That is the lesson of the Syriza government in Greece. Despite being elected on a radical anti-capitalist programme to transform Greece the central leaders were unwilling to take power out of the hands of the Greek capitalists and their European backers.

Only when we have a government with the courage and understanding to do what is needed by any means necessary will have the beginnings of a socialist society. Only then will we be able to guarantee work, education, health care and creative pursuits as of right to become a fully developed human being able to live at peace with nature.