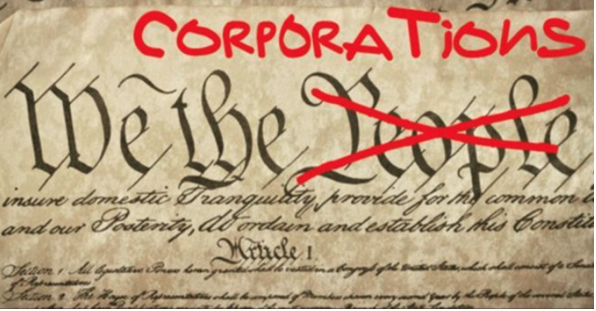 On Cable Street footpath, a citizen waved a flag of sovereignty to draw attention to the protest;

Protest organiser, Greg Rzesniowiecki, discussing  the march-route and other details with Police. There was good co-operation between organisers and police – and this time there was no noticeable carrying or display  of offensive weapons such as tasers by constables;

“Fats”, giving a mihi to assembled citizens in the park square;

Co-organiser, Ariana, addressing citizens. She advised the crowd that this would be a peaceful protest and that Marshals would be assisting marchers throughout. She said that John Key was desperate to portray anti-TPPA protestors as a “lawless rent-a-crowd” and that “we should not give him that opportunity“;

Making your beliefs known through body-art ;

Members of the New Zealand Health and Climate Council adding their opposition to the TPPA;

In October 2014, the OraTaiao The New Zealand Climate and Health Council warned;

The biggest threat is the ‘Investor State Dispute Settlement’ (ISDS) provisions. This mechanism allows overseas companies, including fossil fuel companies, to sue our Government if local law changes to bring down greenhouse gas emissions might affect their value or profits.

This is happening overseas already, for example, in Germany where measures to reduce the damaging effects of carbon dioxide emissions from a coal-fired power plant have been subject to an investment dispute.

‘Climate change is already contributing to the global burden of disease and premature death, with worse to come’ says Dr Alex Macmillan of OraTaiao The NZ Climate and Health Council.

‘Climate change is a health threat for all New Zealanders, with Māori, Pacific people, children, the elderly, and low income groups likely to be the hardest hit’.

‘For a just transition to a low emissions economy, we need to put people’s health first – not the profits of overseas companies. New Zealand needs to remain a free democracy to protect our climate, our health, our country and our future’.

Irrespective of  mealy-mouthed “assurances from our Esteemed Dear Leader, New Zealand remains vulnerable to law-suits from corporations  complaining of “loss of profits”.

Despite John Key repeating  the mantra that New Zealand has never been sued,  our own Parliament put off legislation enabling plain-packaging for tobacco products until an ISDS lawsuit brought by Phillip Morris against the Australian government had been resolved.

“It will almost certainly be introduced, have its first reading, then go off to the select committee.

But it’s very, very unlikely it will be passed. In fact, in my view it shouldn’t be passed until we’ve actually had a ruling out of Australia.

We think it’s prudent to wait till we see a ruling out of Australia. If there’s a successful legal challenge out of Australia, that would guide us how legislation might be drafted in New Zealand.”

So we don’t need to be sued under ISDS provisions. The mere threat of legal action is sufficient to stay the hand of the National government from passing health related legislation.

As usual, Key’s parroted reasurances that “we have never been sued” are hollow.  Last year, the National Government was sued (or, faced a High Court “judicial review” to satisfy right-wing pedants/National apologists) by Shanghai Pengxin. The legal action followed  a Ministerial decision to overturn an  OIO decision to permit the Chinese corporation ftom purchasing a14,000 hectare sheep and cattle station at Lochinver Station;

As I wrote last year subsequent to the media report;

The only difference between scenarios envisaged under the TPPA and the Lochinver Station-Shanghai Pengxin-OIO case is that the latter is being tested under the jurisdiction of a New Zealand Court of law instead of an extra-judicial, and often-secret,  corporate tribunal overseas.

This is cold comfort.

We now have a situation in our own country where, if we determine not to sell to an overseas investor, that decision can be over-turned. Our laws now allow foreign interests to be on an equal footing with New Zealand citizens.

You no longer have to be a tax-paying citizen (born or naturalised) to hold certain rights.

The people assembled, ready to  march to the Governor-General’s residence;

The driver of this vehicle slowed and aggressively yelled out pro-TPPA comments. He was largely ignored, and drove off before Police could catch up to him;

No doubt being a proactive supporter of the TPPA, he will have the initiative to organise a counter pro-TPPA street march. Perhaps someone (his mum?) may even turn up to it.

Meanwhile, the marchers received more encouragement from other members of the public. Some joined in, swelling numbers, and others – like this woman – were content to clap and cheer us on;

The head of the march, with TV1 reporter and cameraman filming their coverage for that evening’s news broadcast;

This couple and their child joined the protest march as it made it’s way along Kent Terrace, heading toward the Basin Reserve;

Her fellow Labour MP, Phil Goff, could learn a lesson of self-discipline and loyalty to Party members from Ms Wall.

Above the marchers, people in apartments  waved and cheered;

As marchers arrived at the Governor-General’s residence;

… they found the gates closed and firmly padlocked;

Which raised the question – had the Governor-General been detained in his home, under house arrest?

Meanwhile, the National regime and our esteemed Dear Leader have at last found a useful purpose to what was once an annoyingly independent news-media – as part of the State security-apparatus. Note how the nation’s journalists lined up in front of the Governor-General’s gates, to form a “protective cordon”;

The marchers assembled, which had by this time doubled in size to around 500 to 600;

“Fats” and another citizen, holding aloft an anti-TPPA placard, where on-coming traffic around the Basin Reserve could clearly view the sign. Judging by the non-stop tooting of car-horns, public sentiment against the TPPA is widespread and palpable;

Amanda Vickers, from It’s Our Future,  addressed the marchers and explained the process by which the petition – bearing approximately 4,300 signatures – would be presented.

“We are requesting the Governor General to command John Key – to put the question of TPP to a binding referendum prior to signing.”

We are asking him to refuse to assent to any enabling legislation unless the people vote in favour. No one can force the Governor General to sign legislation. If he doesn’t sign it doesn’t become law.

Amanda says, “The Governor General in agreeing with our request, provides a unique opportunity to defuse the polarisation around TPP, allowing for open public discussion about the TPP implications, in the period before a referendum was held.”

The petition to the Governor-General requests;

We, the UNDERSIGNED citizens and residents of Aotearoa New Zealand, PETITION Your Excellency:
1. to COMMAND the Government to put the question of proceeding with, or withdrawal from TPPA to a BINDING REFERENDUM; and
2. to PROHIBIT the Government from signing any final agreement, or taking any binding treaty action UNLESS the People vote in favour; and
3. to REFUSE Assent to any enabling legislation UNLESS the People vote in favour.

Ms Vickers told marchers  that professional bodies had spoken out against the TPPA and that there was widespread condemnation of many of it’s provisions. She said there could be no mandate for  an agreement that had been negotiated in secrecy, and that we were only now learning how much of our sovereignty would be ceded, especially to offshore, secret tribunals under the ISDS provisions.

Ms Vickers said that a hundred jurists and judges  had written to the National government, voicing their concerns at ISDS secret tribunals and their total lack of accountability. They had not received a reply from the government.

This was a huge loss of sovereignty and called the provisions of the TPPA, extreme.

She said that the TPPA should be put to a binding referendum and in the meantime, any legislation to enable the Agreement should be rejected by the Governor General. Ms Vickers further added that this event was still only the beginning, saying;

“We are not prepared to surrender our sovereignty and self-determination.”

Ms Vickers then explained to the assembled people that when the Governor General’s representative, Gregory Baughen, arrived at the gates to receive the petition, that everyone should stand and see the hand-over through in silence. She said this would honour the process and give it solemnity.

She also gave a warning that if any agent provocateur’s  tried to incite violence or disruption, that protest organiser’s would not tolerate it. She said “we had enough of that during the 1981 Springbok Tour protests, and we don’t want to see it again“. She asked people to film anyone who attempted to disrupt proceedings.

The Governor General’s representative, Gregory Baughen, arrived, and in near-silence (to the background noise of passing traffic) he received  the petition in a flag-draped box;

The hand-over was carried out with quiet dignity. As he walked back, up the driveway, the people assembled spontaneously began to sing (see TV1 video at 1:48) the New Zealand anthem, first in Maori, then in English;

This was dignified respect which John Key has yet to earn.

Seen at an anti-TPPA protest march in Wellington  on 15 August 2015;

Because some matters are apparently  “too important” to be left to We, The People to vote on.

Labour: Andrew Little On the TPPA

It’s Our Future: Take Action Against the TPPA

Citizens march against TPPA in Wellington: Did Police hide tasers at TPPA march?

» Use must be for non-commercial purposes.
» Where purpose of use is commercial, a donation to Child Poverty Action Group is requested.
» At all times, images must be used only in context, and not to denigrate individuals or groups.
» Acknowledgement of source is requested.
» Mick McCrohon asserts his rights over images attributed to him.