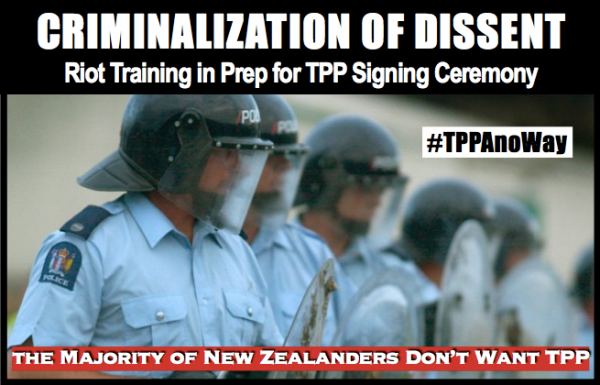 As the police and the Government move to manufacture violence on February 4th with their riot training, armed cops with machine guns and now door knocking activists, take a moment to realise the cop in charge is an American trained narc…

What’s changed? Well, in Dunedin this may provide some link:

Superintendent Mike Pannett, who took over from acting district commander Jason Guthrie this week… Supt Pannett has just returned from four years in Washington DC, where he was chairperson of the Washington DC Liaison Office Association, which covered North, Central and South America.

Fed from multiple inputs in the field, the VCC exists on a secure system for any designated audience members online… “Feedback on the New Zealand operation has been extremely positive from our international law enforcement partners including the FBI and the US Department of Justice,” Mr Pannett reported in the February Police online magazine, TenOne.

Detective Superintendent Mike Pannett, New Zealand police liaison officer in Washington, has been ordered to swear an affidavit, setting out full details of the monitoring he was a party to from the FBI’s Multi Agency Command Centre.

It does seem strange that when the ODT asked the Dunedin police for comment on their allegedly having harassed an activist, they; “could not immediately be reached with a request for comment”. Yet the very next story to this in the online ODT Dunedin section was a puff piece about how an establishment minion was all set to bring to peace to the region in some unspecified manner.

So an American trained narc is in charge of the protests and all of a sudden he is using the tactics he’s learned from the yanks?

Oh the irony, NZ cops trained by Americans to quell protests in NZ against American corporations dominating us.

We must not be intimidated by these thug tactics, but I think we must also aknowledge Chris Trotter’s point that Key is desperate to paint these protests out as violent radicals. Let’s protest, let’s demand change, let’s force them to arrest us for civil disobedience, but never give the bastards the chance to rob us of legitimacy.