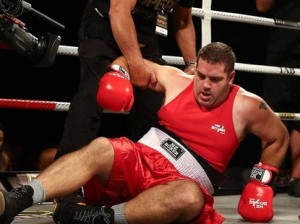 The great man is down – but could he be out…of NZ?

Cameron Slater has taken to social media to throw a tantrum over Police decision to not appeal to the High Court their illegal and politically motivated raid of investigative journalist Nicky Hager.

The champ is a wee bit down in the mouth about the decision. He states on Facebook…

Then the Police ring me and tell me that they aren’t going to appeal the High Court ruling in the Hager case. So the lefty cunts who stole my data, and tried to steal an election all get away with their criminality.

…well, that’s not completely true there big Cam. The cops over reached, deceived a judge and are going to have to cough up a lot of compensation to Nicky for breaching his rights as a journalist. You don’t get the same treatment because your hate spite isn’t journalism and as such can’t get that sort of protection because your actions and abuses of political power were in the public interest. That it’s been a year and you still can’t sort that simple truth out yet doesn’t help your case.

The great voice of the misunderstood white right bloke goes on..

They say they are pursuing other avenues, but yet again Nicky Hager has laundered stolen goods, made plenty of money and tried to influence an election…with zero consequences.

…umm, Cam, when the SIS and PMs Office colluded to leak you information months before the 2011 election, that was an attempt to influence an election. Telling the truth about you and what you were secretly doing with the Government is called ‘journalism’, not laundering stolen good.

The helmsman of mayhem and chaos continues…

It is days like this that you really question whether or not karma exists…or why you even bother doing what you do. Still there is much to be thankful for.

…Oh Cam, if the true weight of all the terrible spite and political sadism you spread has somehow managed to connect with what ever stunted sense of conscience you have left and is making you doubt doing what you do, can I help by suggesting you should definitely listen to those voices.

The great man then leaves us with this terrible warning…

Despite everything I still think I am very blessed and lucky to live in this country…though I’m not sure how long can bothered living here anymore. I might just go back to my place of birth (Fiji) or live somewhere totally different…like Israel….because New Zealand really doesn’t feel like home sometimes.

…back to the military dictatorship in Fiji or the apartheid state of Israel? Oh he teases us! Surely Mr Slater wouldn’t want to skip the country just as the Matt Blomfield and Colin Craig defamation cases are so close to resolution?

I think we should start a givealittle fund to help Cam and his family move far far away.