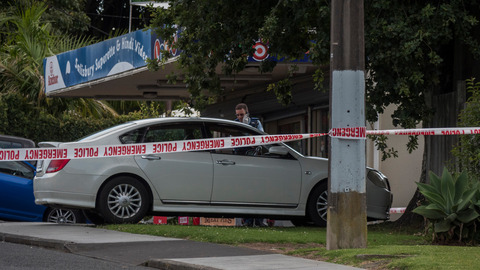 Last week my flatmates friend was involved in a serious domestic violence incident, so serious that that she was assaulted with a rock, chased and then hit by a car which crushed her against a large tree causing serious injuries to her legs requiring hospital treatment.

I was shocked that such a violent act was not headline news so I looked again sure that there would be an update or report of some kind. And there it was in all its understated glory – “clash on the north shore”; having just read the title I would have skipped on by thinking a couple of elderly ladies had had a tiff at bingo or someone had accidentally opened their SUV door onto some else’s SUV door as often happens on the north shore. But no! there was a picture of the tree and as I scrolled down I saw that it was indeed the same extremely violent incident trivialised by being described as a clash, a word more commonly associated with the sorts of emotive disputes much enjoyed by followers of the real housewives of Beverly hills.

Could it be that this reporter had such seriously violent tendencies that they considered running someone down with a car to be a measured and appropriate response to a differing of opinion or a person whose personality didn’t quite gel with their own as the term clash implies?

Of course not to believe that this extreme violence was caused by such trivial reasons as those we typically associate with the word “clash” is beyond even a herald reporter. So why the underwhelming and not to mention devastatingly invalidating stance of this write up and the ones that followed?

Gender is part of the answer – The driver of the car and perpetrator of this act of violence was female, as was the victim who experienced the assault. Behind the notions of gender are also the politics of violence, sexuality, and class.

Firstly class. crimes on the shore seem to be reported by main stream media with subtle undertones of snobbery not seen in the often half told but generally overtly graphic and eye grabbing headlines of a south side “clash” more likely to be labelled a “brawl” “gang war” or “insert dramatic term”. The languaging of shore crimes tend to focus on the emotional elements of crime rather than physical ones. For example In Birkdale an elderly woman “fears for her life when confronted by wired intruder in her own home” while an elderly woman out south is brutalised by a young thug in her pensioner flat” in similar circumstances. These descriptions imply that both the victims and perpetrators of crimes on the shore are first thinking, feeling and then acting entities while the south headings often reduce people to bodies, behaviours, and categorise them not by human essence but by their grouping or affiliation with others of the same culture, age, gender, class, location. So straight away we are reminded of the humanity of both victims and perpetrators in shore crimes and we are likely then to be (even if only slightly) more open minded to the possibility of an ordinary human rationale behind a perpetrators crime, in other words someone we are invited to relate to as much like us. The opposite tends to apply out south where the use of words like thug distances us from the possibility of this person being much like us.

Secondly and perhaps most obviously in this article are notions about gender specific violence. Women are thought to be weaker and therefore less of a threat physically in relationships. Violent acts by women are often minimised, ridiculed, laughed about, or even glorified. So if the violent act itself is not taken seriously how then can we validate the effects of that violence on the victim? We can’t, we have to minimise their suffering to a “clash” to fit the tone of an article as was seen here. And to make matters worse informed writers (those who haven’t been under a rock for the past 10 years) will also understand that much of society will be reading their article from the height of a much needed pendulum swing away from ‘women-blaming’ towards a recognition, well backed up by statistics, that domestic violence is largely an issue of male violence against women.

As a society we are beginning to see the need to categorise violence against women as largely a Male issue that men need to take responsibility for. We need this change of social perception as a necessary transition away from blaming women for violence. Blaming women for the violence they experience at the hand of men was, and is, an ineffective way to change the problematic behaviour of violence for couples and society. Blaming women also does nothing to protect people from being trapped in cycles of power and control which ultimately lead to physical violence.

With this much needed change in thinking just peaking over the horizon who then wants to single out the exception to the hard won new view, it’s easy to fear that people will label you uneducated politically incorrect, not feminist and even homophobic in situations like this. And more worrying still what if your story of one woman’s violence detracts from the greater issue of male violence against women and you inadvertently derail the very thing you believe in; Finding yourself getting pats on the back and approving nods from the Neanderthals who still try to kid themselves and the world around them that women are just as bad as men when it comes to violence and that feminists are man hating she Devils with hairy legs. Heaven forbid I should sit at their table; I’d rather sink right through the floor than do so.

Perhaps the answer is perspective; let us report female violence in the context of research that says violence against women is largely a male issue. Let us and appropriately so; target the majority problem with our resource, time and energy as would any business owner making a calculated investment; or any hospital seeking to reduce the spread of infection. Of course let us deal with the epidemic that is male violence against women but let us also like any good doctor find time to treat the rare and unusual cases too so that we make bloody sure they don’t spread and grow into yet another plague of ignorance.