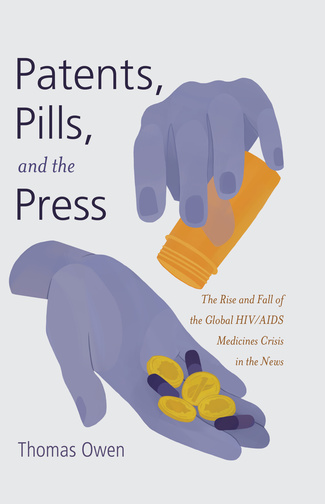 Hidden within  the Trans Pacific Partnership Agreement is a longstanding conflict between pharmaceutical corporations and health activists over the availability of generic medicines.

For big Pharma the costs of biomedical research, development and product testing must be covered by patent revenues. Subsequent profits enable further development of successful medicines.

For activists across a range of health issues,  extensive patent regimes raise medical costs for the poor and generate monopoly rents for big Pharma.

A central battle line here concerns the price and availability of anti-retroviral drugs for those afflicted by HIV/AIDS. On this issue the conflict between health activists and big Pharma is superbly explained in Thomas Owen`s `Patents, Pills and the Press : the rise and fall of the global HIV/AIDS medicines crisis in the news` .

He starts from the 1970s when patent rights were negotiated within the United Nations` World Intellectual Property Organisation (WIPO). A coalition of  countries called the `Group of 77` pressed for weaker intellectual property rights and greater allowances for generic medicines. Such democratic pressure was too much for Pfizer and other pharmaceutical corporations.

During the 1980s they sought to relocate patent negotiations within multilateral trade agreements instead of the United Nations. In 1995, when the General Agreement on Tariffs and Trade (GATT) was replaced by the World Trade Organisation (WTO) , patent negotiations became incorporated within the Trade Related Aspects of Intellectual Property Rights (TRIPS). Big Pharma`s long term strategy was to re-frame generic medicines as a criminal menace and pro-generics health initiatives as acts of piracy.

There was no middle ground here, either there would be strong patent protection or no protection at all.

Over the same period HIV/AIDS was becoming a  pandemic. In 1990 those with HIV numbered  approximately 8 million people worldwide and 5 million people in sub-Saharan Africa. Five years later the numbers afflicted were 29 million and 19  million respectively. In 1996 Highly Active Antiretroviral Therapy  (HAART) became publicly available. Those with HIV, under the new treatment, could advance their life expectancy by several decades or more (depending on their pre-existing condition and prevailing life expectancy).

Those with HIV without access to  treatment could be expected to die within 10 years of  contraction, on average (for the final nine months they would be entirely incapacitated). Clearly, inequalities of access to anti-retrovirals meant stark divergences in the quantity and  quality of life.

In these circumstances Owen shows how big Pharma`s patent regime was broken down by a transnationally co-ordinated `Access to Medicines ` campaign. The struggle began when the US based Consumer Project on Technology (CP Tech) formed by  Ralph Nader and James Love  identified the connection between Intellectual Property Rights Agreements (IPRs) and the affordability of HIV/AIDS medicines. They lobbied the US Trade Representative to make generic medicines available and allow their  distribution internationally  through government licensing agreements. This became part of a worldwide campaign which succeeded in heightening international media interest in the HIV/AIDS medicines and patent protection issue.

Consequently the dominant `piracy` discourse was undermined and pro-generics arguments made headway.

The frontline in the struggle was South Africa ; in 1997 Nelson Mandela`s ANC government passed the Medicines and Related  Substances  Control Amendment Act which allowed the importation of generic medicines in cases of national health emergency. The following year 39 pharmaceutical companies represented by the South African  Pharmaceutical Manufacturers Association (PMA) tried to sue the government. This was not a good look; big Pharma versus Nelson Mandela, corporate profit versus poverty stricken Aids victims. In 2001 when the lawsuit went to court major international media coverage allowed the `Access to Medicines ` coalition to mobilise around the patents/generics issue.

In April the PMA unconditionally removed its law suit.

This turn of events raised the possibility that  other  countries would allow legal access to generics. The legitimacy of such medicines, especially for the treatment of otherwise lethal diseases such as HIV/AIDs  was acknowledged by governments, supra-national institutions and private philanthropic organisations. The availability of antiretroviral treatments saved millions of lives.

However, big Pharma was down rather than out.

Owen skilfully analyses how and why they have successfully fought back since the early 2000s. Here I will just mention just a few critical themes.

First, the `Access to Medicines` coalition has been overshadowed by a corporate philanthropic  `charity aid` approach which subtly limits the availability of  generic medicines while avoiding the issue of patents. This is hardly surprising  in the case of the Bill and Melinda Gates Foundation; their huge  funds ultimately derive from the monopoly rents accrued by Microsoft, in defiance of US regulators.

Second, intellectual copyright governance has become fragmented, much to the  advantage of big Pharma.  The backlash against generics is embedded within an array of bilateral `free trade` agreements alongside regional agreements such as the TPPA.  These arrangements effectively extend  the TRIPS measures which had been developed within the WTO. In the context of  the TPPA`s  investor versus state tribunals, for example, the distribution of generic medicines could be severely curtailed.

Third, `Access to Medicine` groups now inhabit a fragmented media domain. Social media networking enables activists to coalesce and mobilize in real time just as the mainstream media has contracted as a terrain of  struggle, internationally and within influential Western countries.

The incisive analysis contained in this book will be invaluable for health professionals and other activists  opposing the strategies of big Pharma, within New Zealand and beyond.

…..To purchase this book at a reduced price contact Thomas Owen   towen@aut.ac.nz