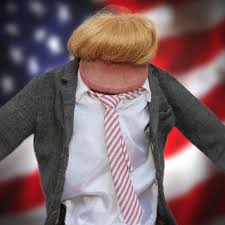 The Iranian born Canadian artist, Soraya Doolbaz, is not your average professional photographer.

Doolbaz specializes in comic photography and her latest high fashion photos of penises dressed up in cute little outfits have had global media coverage including write-ups in Huffington Post (written by Ron Dicker-not kidding!) and Cosmopolitan.

Doolbaz’s latest work, entitled “dick-tators of history and friends”, features, amongst others, ‘Napoleon Boner Parte’ and ‘Donald ‘The D*ck’ Trump’.

Reading through her writing, Doolbaz claims that her aim is to address the imbalance that exists in depiction of sexual imagery in the media.

Doolbaz says: ”In my humble opinion, men have been controlling the content. Most men don’t want to see another guy’s dick. As a result, tits and ass have owned the spot light”.

Ultimately though, Doolbaz says that she wants ”to make people laugh”.

Did I laugh? I smiled here and there but if laughter is what you are really after, then go and see a real comedy at the World Buskers festival.

Doolbaz claims to bring “comfort and confidence around sexuality for men and women”. Really?

This is a bit like arguing that hijabi women would consider unveiling if we engaged them in conversation about emancipation without our clothes on.

But Doolbaz’s work does serve an important, be it hidden, purpose.

The name “Doolbaz” in Farsi literally means ‘d*ck-player’. This is clearly a fake name and a clue that Doolbaz might be playing a joke on the media?

The global coverage that has elevated Doolbaz’s frivolous work to unimaginable heights is a damning indictment of the media and the changing face of on-line journalism.

We are constantly being pulled towards trivial news that consume our time and divert our attention from contents that really matter; contents like the suffering of Palestinians and the starving children in Madaya or closer at home, the TPPA.

And, if you think that cringe-worthy news don’t appear in New Zealand’s media, then consider the endless stories about Max Key or the news of a broken penis which was promoted via twitter by @NZStuff on the same day that the death of 2-year-old Emma-Lita Bourne was reported (Emma-Lita died after getting sick in a cold and damp state home).

Yes, it is true that tantalizing and sensationalized news have always been with us, but what is different now is the new ways on-line clicks can be measured and closely analysed. As a result, journalists are encouraged, and sometimes incentivized, to provide click-bait news that overpromise in their headlines and under-deliver in their content. This trend is dumping down our news and turning away intelligent readers.

The media, of course, would claim that they are just responding to what their audiences are demanding.

Tobacco and junk food industries make similar claims. Having developed a harmful consumption habit in their consumers, they claim that their products respond to existing needs.

Doolbaz, who reportedly sold one of her limited edition prints for $10,000 US dollars, is now considered an established artist.

I must confess that I admire Doolbaz’s audacity, and prefer my fellow Iranian women to be bold rather than timid, but whether Doolbaz is a real artist or just a clever prankster remains to be seen. What is certain, however, is that the intense interest in her work is a sad commentary on the state of our media and modern Western society in general.