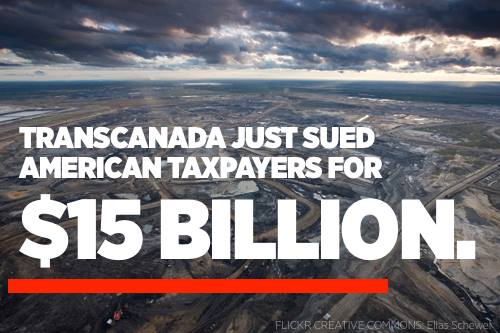 Beyond the spin that NZers would have a say about the TPPA, beyond the lies of how much money it will make us, beyond the fact it’s an American geopolitical strategy to counter China in the Pacific – is the terrifying reality that the TPPA opens NZ up to foreign corporations suing us if domestic law costs them money.

Key say’s it’s unlikely to happen – it just did.

A legal dispute over the Keystone XL oil pipeline is giving opponents of a Pacific trade agreement a fresh argument in their effort to get the US Congress to kill the pact.

They say the case announced this week, in which TransCanada is seeking arbitration to recover US$15 billion tied to the Obama administration’s rejection of Keystone, shows how foreign companies could use provisions of the proposed Trans-Pacific Partnership trade agreement to challenge US policy on the environment and other matters.

“I can’t think of many clearer signals that could have been offered at this moment to show how big a threat the TPP poses to our efforts to keep fossil fuels in the ground,” said Ben Beachy, a senior policy adviser for the Sierra Club, the San Francisco-based environmental group.

The trade pact will encourage oil and gas companies to use arbitration to seek compensation from the United States, he said.

TransCanada argues that by rejecting the pipeline, the Obama administration violated provisions of a different trade deal – the North American Free Trade agreement.

…by signing the TPPA and having it ratified by the necessary members John Key is signing away our ability to pass domestic law without costing us millions in legal fees and opening us up to potentially massive damage claims from unscrupulous corporates.

This is forced trade not free trade.