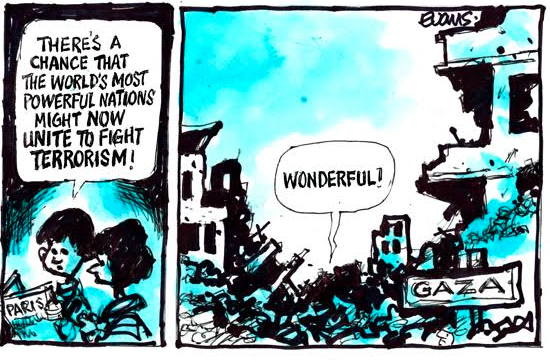 Promotion of the idea that direct negotiations could result in Israel abandoning the expansionist Zionist project ignores reality.

New Zealand’s draft resolution on Israel/Palestine, prepared for the United Nations Security Council, seeks to protect Israel from the consequences of its violations of international law by persuading Palestine to desist from taking action at the International Criminal Court (ICC). In exchange, all that is offered to the Palestinians is a resumption of the requirement that they renew the already tragically failed so-called ‘peace process’ talks. The draft assumes that the defenceless Palestinian people should negotiate their liberty directly with an aggressive, occupying power, without recourse to international law. Amnesty International has described the proposal as misguided. That’s putting it mildly.

Fearful of justice
Earlier this year, the ICC announced plans to launch an inquiry into allegations of widespread human rights abuses by Israel during its 2014 blitz on Gaza. On 30 November 2015, new evidence was handed to the International Criminal Court by four human rights organisations: Al-Haq, the Palestinian Centre for Human Rights, Al-Mezan and Al-Dameer. The Palestinian submissions to the ICC certainly reinforce United Nations’ allegations of Israeli war crimes during its assault on Gaza last year.

Israel’s vulnerability under international law is the one thing that terrifies Zionists and their Western allies. The so-called ‘peace process’ is a device for normalising Israel’s inhumanities; it is a public façade that reduces the enormity of war crimes to matters merely of dispute. This sidelining of the provisions of international law enables Israel to go on increasing and consolidating its ill-gotten gains. Instead of welcoming the Palestinian petition to the ICC as a way to clear Israel’s name, Western leaders join with Israel in arguing that the Palestinian people are not entitled to petition the ICC. Israel’s claim that international investigation into its alleged human rights abuses will undermine ‘peace talks’ is tacit recognition that the UN’s allegations have weight. Israel seems to believe that its only secure option is to obstruct the course of justice altogether. The shameful failure of the Security Council members to uphold international law, by bringing Israel to account, continues to afford the Zionist state impunity to pursue its ideologically-driven racism and discrimination.

Al-Hadidiya: two days in the development of the Zionist project
At 7:30 on the morning of 26 November 2015, the Israeli Army of Occupation invaded the Jordan Valley community of al-Hadidiya for yet another onslaught of destruction. Israel’s fury was directed at the people for daring to spread gravel on the rough road that links their village to the outside world in order to prepare it for the rainy winter months ahead. Homes and livestock shelters were destroyed and the pregnant daughter of the head of the community, Abu Saqer, was assaulted by Israeli soldiers. She was admitted to hospital, in danger of losing her baby. The resilient community, however, began to rebuild homes and other shelters after the Israeli rampage and, on 28 November, the Red Crescent tried also to assist. The Israeli military came immediately and either destroyed, or confiscated, every kind of shelter. The troops even took away plastic sheeting, under which people were trying to shelter from the rain.

The Zionist determination to annex Palestinian land is what drives Israel to deny the Palestinian community access to its drinking water and strictly limit freedom of movement. The goal is forcible population transfer (revealed in the Knesset Subcommittee on the Judea and Samaria Area transcripts) and exploitation. Israel has already allocated generous tracts of land and water resources exclusively to Jewish-only Israeli settlements.

Refugees and forcible removals
Regarding the creation of refugees and the forcible removal of native populations, Israel is in breach of article 49 of the Fourth Geneva Convention relative to the protection of civilians in time of war: “Individual or mass forcible transfers, as well as deportations of protected persons from occupied territory to the territory of the Occupying Power or to that of any other country, occupied or not, are prohibited, regardless of their motive.” The Convention does allow temporary removal in order to protect the population from violence during conflict but “persons thus evacuated shall be transferred back to their homes as soon as hostilities in the area in question have ceased.”

Negotiations: evidence of bad faith
A study by the Knesset’s Research and Information Centre on Israel’s policy towards native Bedouin, reported in the Israeli newspaper Haaretz, quotes Yaron Ben Ezra, director-general of the Jewish Agency’s settlement division, as follows:

“The goal of the plan is to grab the last remaining piece of land and thereby prevent further Bedouin incursion into any more state land and the development of an Arab belt from the south of Mount Hebron toward Arad and approaching Dimona and Yeruham, and the area extending toward Be’er Sheva.”

The Zionist regime, which views indigenous native populations as infiltrators and invaders of land coveted by Israel, is obviously never going to voluntarily give up land that it regards as irretrievably annexed. On 29 November 2015, Israeli Prime Minister Benjamin Netanyahu declared that there are no plans to deliver any land from West Bank Area C to Palestinians. In a meeting for Likud ministers, Netanyahu stressed that there will be no transfer of land to the Palestinian Authority, “not 40 thousand dunams, not 10 thousand, not one metre.”

Profiting from oppression
The NZ Government-owned New Zealand Super Fund invests in, and profits from, a number of Israeli companies that variously benefit illegal settlements and the Israeli arms industry. Israel profits from sales of the population control techniques and weapons it has evolved in the Occupied West Bank and the blockaded Gaza Strip. A documentary called The Lab unveils the truth about Israel’s arms industry. Captive Palestinians in the West Bank and Gaza are being subjected to profitable military experiments that enrich Israeli arms dealers, entrepreneurs and former generals. Israel is ranked as one of the world’s largest arms exporters, which is hardly surprising given the country’s militaristic founding ideology and massive US tax-payer contributions. Benjamin Ben-Eliezer, a former Israeli Defence Minister, now Industry Minister, attributes Israel’s burgeoning arms sales to the fact that “people like to buy things that have been tested.” This thriving export industry is based upon armaments and techniques of coercion that are refined and tested upon real communities and showcased to the world as such. Israel can demonstrate that it has the techniques and proven ability to control the lives of subject people, down to the finest detail.

Complicity – or ignorance?
Over the past few months Israel has stepped up the rate at which it destroys Palestinian homes, a form of collective punishment that strikes at the very heart of family life and, in particular, the well-being of children. While the process of settlement establishment and consolidation goes on in flagrant disregard of international law, the Israeli Occupation has destroyed more than 30,000 Palestinian homes, 3,000 of which were in East Jerusalem. While Israel has killed United Nations personnel and destroyed UN facilities in Gaza, not one member of the Security Council has raised the possibility of sanctions against the Zionist state.

Israel’s conduct must not be allowed to legitimise itself through intimidation masquerading as ‘negotiations’. The demand that the Occupying power’s victims deal directly with their oppressor runs counter to international law, and is a direct threat to peace and global stability. As a High Contracting Party to the Geneva Conventions, New Zealand has an obligation to protect and uphold Palestinian human rights. Prime Minister John Key, Foreign Affairs Minister Murray McCully and the National Party as whole, must be called upon to declare whether or not they believe in international law and explain their support for Israel’s attempts to evade facing the ICC.