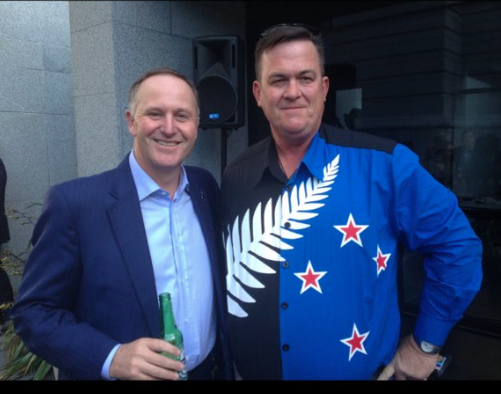 SPOT THE DIFFERENCE  One is a right wing deluded fantasist who thinks a flag should be a logo, the other is Sean Plunket.

So a large chunk of NZ has all the taste of cask wine. The flag referendum has become a panel of lepers judging a beauty competition. Given our horrific domestic abuse stats though, I suppose black and blue is an appropriate choice.

I didn’t vote in this vanity project as I refuse point blank to buy into National’s distraction tactics. $26million plus spent on changing the flag while 305 000 children live in poverty is the very definition of obscenity in my book.

Things that were most interesting from the numbers crunched were…

A flag design requires a mature discussion about the hopes, dreams and aspirations of a nation bringing in a country’s cultural, philosophical and artistic minds. This is a weet-bix designed process for the lowest common denominator carried out for pure political reasons to distract the sleepy hobbits whenever the Government need it.