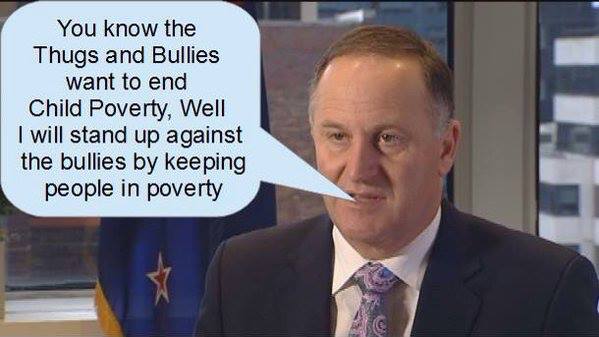 Protesters at Christmas party ‘bullies and thugs’ – John Key
Picket lines of protesters who stopped prominent National Party members from attending their West Auckland Christmas party have been called “a bunch of thugs and bullies” by the Prime Minister.

John Key was unable to attend the annual event in the West Auckland suburb of Te Atatu on Sunday because of protesters led by former Green MP and veteran protester Sue Bradford.

Auckland Action Against Poverty have a direct action philosophy which when you consider the draconian welfare reforms and war on the poor being waged is more than justified. They stopped Key having his Christmas Party the way this Government are stopping the 305 000 kids in poverty from celebrating Christmas.

Having Key call the protestors ‘bullies and thugs’ is hilarious when you consider how his Government have bullied and threatened anyone attempting to hold him to account.

Key talks with Cameron Slater all the time, is there anyone else in NZ who is a bigger bully or thug than whaleoil?