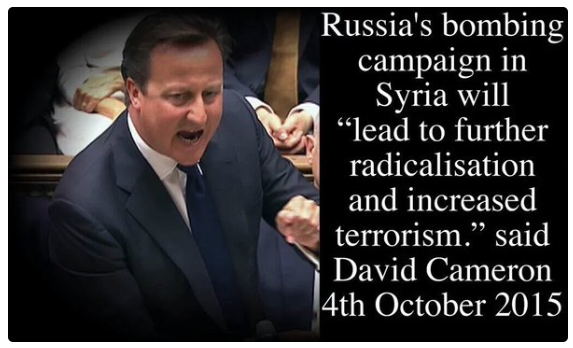 “Democracy is the worst form of government, except for all the others.” So said Winston Churchill. This week, the world witnessed the best and worst of a grand old democracy in action. Should Britain bomb ISIS in Syria was the question?

The unexpected star of the marathon debate was the Shadow Foreign Secretary Hilary Benn. AS John Grace reported in The Guardian: “Syria may not be liberated, but Hilary Benn has been. Freed from the burden of his father’s shadow. Freed from the necessity of toeing a party line. Free to be himself. Free of doubt. Where others – both for and against extending air-strikes on Syria – had spoken with hand-wringing angst of the torment they had suffered in squaring their consciences, Benn knew only moral certainty. The vote to go to war had never been in question. What had been lacking was a leader the House of Commons could unite behind. Now they had their man.”

Here’s what their man had to say: “As a party, we have always been defined by our internationalism. We believe we have a responsibility, one to another. We never have and we never should walk by on the other side of the road. And we are here faced by fascists. Not just their calculated brutality, but their belief that they are superior to every single one of us in this chamber tonight and all of the people we represent. They hold us in contempt. They hold our values in contempt. They hold our belief in tolerance and decency in contempt. They hold our democracy – the means by which we will make our decision tonight – in contempt. And what we know about fascists is that they need to be defeated and it is why, as we have heard tonight, socialists and trade unionists were just one part of the international brigade in the 1930s to fight against Franco. It’s why this entire House stood up against Hitler and Mussolini. It’s why our party has always stood up against the denial of human rights and for justice and my view, Mr Speaker, is that we must now confront this evil. It is now time for us to do our bit in Syria and that is why I ask my colleagues to vote in favour of this motion tonight.”

Fascists. Calculated brutality. Superiority. Contempt for values, tolerance, decency and democracy. Denial of human rights and justice. Fascists. Hitler. Mussolini. Franco. Evil.
Benn’s speech, widely lauded as the best of the night, lacks for nothing in moral certainty. Sadly, the issue was not about dropping morals on Syria, it was about dropping bombs. Military certainty was the crux of the matter: would dropping bombs on Syria have any effect? Would it make the world a safer place? Or would it make things worse? Benn was silent on these crucial points. For him, invoking Hitler, Mussolini and Franco was sufficient.

For a leading light of the Left to claim the current crisis in any way resembles the Spanish Civil War or Nazi aggression in WWII applies Godwin’s Law in the most egregious, dark and dangerous way. ISIS has no army, navy or air force. It is not amassing two million troops on an international border. It is not using a nation’s vast industrial complex to make bombs and bullets. It has no Strategic Command and Control Centre, no NORAD, no Wolf’s Lair. There is no Fuhrer huddling in a Bunker in Raqqa. Today, there is no easily defined fascist-nation-state-enemy as Germany or Italy once were. This enemy attacked Paris with 8 suicide assassins. It did not invade France with an army of occupation.

Surprisingly, some of the most compelling and coherent arguments against the motion came from David Cameron’s own party.

Conservative MP John Baron: “The short-term effect of British airstrikes will be marginal. But as we intervene more, we become more responsible for the events on the ground and lay ourselves open to the unintended consequences of the fog of war. Without a comprehensive strategy, airstrikes will simply reinforce the west’s long-term failure in the region generally, at a time when there are already too many aircraft chasing too few targets. And I suggest, just as in previous ill-advised western interventions, a strong pattern emerges. Time and time again the executive makes a convincing case, often with the support of intelligence sources, and time and time again it turns out to be wrong. We have stood at this very point before. We should have no excuse for repeating our errors and setting out on the same tragic, misguided path once more.”

Conservative MP Andrew Tyrie: “The ruling out of western ground forces is very significant. It tells us that, after Iraq and Afghanistan, the west appears to lack the will, and perhaps the military strength, to commit the resources that might be needed to construct a new order from the shaken kaleidoscope of Syria. As in Libya, it would be relatively easy to remove a brutal dictator from the air, and perhaps also to suppress Isil, but it would be extremely difficult to construct a regime more favourable to our long-term interests. We do not need to look into a crystal ball to see that; we can read the book. The result of over a decade of intervention in the Middle East has been not the creation of a regional order more attuned to western values and interests, but the destruction of an existing order of dictatorships that, however odious, was at least effective in supressing the sectarian conflicts and resulting terrorism that have taken root in the middle east. Regime change in Iraq brought anarchy and terrible suffering. It has also made us less safe. Above all, it has created the conditions for the growth of militant extremism. We should be under no illusions: today’s vote is not a small step. Once we have deployed military forces in Syria, we will be militarily, politically and morally deeply engaged in that country, and probably for many years to come.. That is why the government’s description of the extension of bombing to Syria as merely an extension of what we were already doing in Iraq is misplaced. We simply have not heard enough from the government about exactly what the reconstruction will mean. The timing of this vote has everything to do with the opportunity to secure a majority provided by the shocking attacks in Paris. Everybody feels a bond with the French, but an emotional reflex is not enough. Military action might be effective at some point, but military action without a political strategy is folly. We have yet to hear that strategy, so I cannot support the government’s motion tonight.”

Conservative MP Dr Julian Lewis : “Honourable members are being asked to back airstrikes against Daesh to show solidarity with our French and American friends, yet a gesture of solidarity – however sincerely meant – can’t somehow be a substitute for hard-headed strategy. Indeed, the fact that the British government wanted to bomb first one side and then the other in the same civil war in such a short space of time illustrates to my mind a vacuum at the heart of our strategy. At least we are now targeting our deadly Islamist enemies rather than trying to bring down yet another dictator with the same likely results as in Iraq and in Libya.”

In the House of Lords, even the Archbishop of Canterbury, Justin Welby, warned against doing “the right thing in such a wrong way that it becomes the wrong thing”: “The just war criteria have, to my mind, been met. But while they are necessary, they are not by themselves sufficient, in action at this time… Our bombing action plays into the expectation of Isil and other jihadist groups in the region, springing from their apocalyptic theology. The totality of our actions must subvert that false narrative because by itself it will not work. If we act only against Isil globally and only in the way proposed so far we will strengthen their resolve, increase their recruitment and encourage their sympathisers. Without a far more comprehensive approach we confirm their dreadful belief that what they are doing is the will of God.”

David Cameron assured there were “around 70,000 Syrian opposition fighters who do not belong to extremist groups and with whom we can coordinate attacks on Daesh. The House will appreciate there are some limits on what I can say about these groups, not least that I can’t risk the safety of these courageous people who are being targeted daily by the regime, or by Daesh, or by both. But I know that this is an area of great interest and concern for the House, so let me try and say a little more. The 70,000 is an estimate from [the] independent joint intelligence committee based on a detailed analysis updated on a daily basis and drawing on a wide range of open source and intelligence. Of these 70,000, the majority are from the Free Syrian Army. Alongside the 70,000, there are some 20,000 Kurdish fighters with whom we can also work. I am not arguing – and this is a crucial point – that all of these 70,000 are ideal partners. Some though left the Syrian army because of Assad’s brutality and they clearly can play a role in the future of Syria and that is actually a view that is taken by the Russians as well, who are prepared to talk with these people.”

A British Prime Minister cites military intelligence as grounds for military action. Sound familiar? Does anyone truly, madly, deeply believe there are 70 000 Syrian opposition fighters who will join the West in its fight against ISIS? Or are such claims, today as in 2003, as ever, the vacuum at the heart of our strategy?

Having slurred those opposed to bombing as ‘terrorist sympathisers’, David Cameron sent out a victory tweet: “I believe the House has taken the right decision to keep the UK safe – military action in Syria as one part of a broader strategy.” Orwell would be proud.