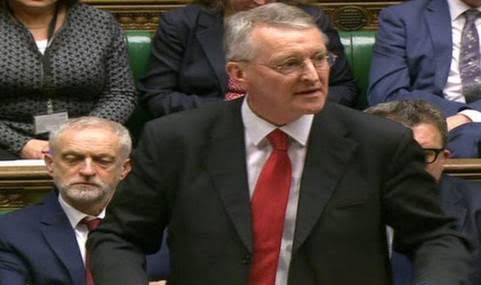 IT HAS BEEN HAILED as one of the best speeches delivered to the House of Commons in 50 years. Having urged his fellow MPs to support the Prime Minister’s motion in favour of bombing Syria, the Shadow Foreign Secretary, Hilary Benn, resumed his seat to resounding cheers from both sides of the aisle. The Labour Leader, Jeremy Corbyn, his face a picture of both puzzlement and exasperation, did not join in the applause. No one from the Labour Party, himself included, had managed to deliver so passionate a speech on behalf of peace.

The emotion missing from Corbyn’s countenance was fear. It speaks well of the man that Benn’s noisy standing ovation did not frighten him. Someone more steeped in the realities of politics would have heard, behind the cheering of the Commons, the dull rattle of the tumbril. He should have known that his opponents weren’t just applauding the impassioned speech of a bellicose social imperialist, they were applauding the fact that, at last, they had found the person to replace the despised Member for Islington North.

It’s been the biggest problem of the Blairites all along that among their ranks there was no one who could hold a candle to Corbyn. When set against the sincerity and plain-spokenness of the front-runner, the bland contributions of the other three leadership contenders came across as utterly unconvincing. Liz Kendall, the candidate most closely associated with the Blairite rump, attracted just 5 percent support from the party membership. What’s more, in the aftermath of the membership’s resounding endorsement of Corbyn, the Labour Right’s petulant refusal to accept that Blairism had been rejected only added to the new leader’s lustre.

Yes, Labour’s parliamentarians had the advantage of a sympathetic press. United in their disdain for Corbyn the journalists and columnists of the allegedly “left-wing” newspapers – The Guardian, The Observer, and The New Statesman – never missed a chance to tell their readers that Labour could not hope to win with Corbyn at the helm. But, increasingly, the left-wing media’s hostility was being written off by the Labour rank-and-file as yet further proof that the whole “mainstream” political establishment was rotten to the core.

What they needed was a challenger untainted by all the petulance and back-stabbing; someone who cleaved to his or her principles with the same sincerity and passion as Corbyn himself. Someone who had served time in the trade union movement. Someone unafraid to summon-up the ghosts of the men and women of the International Brigade who died fighting Franco’s fascists in Spain. Someone who was a teetotaller and a vegetarian. Someone who never fiddled his parliamentary expenses claims,. Someone whose father was, for more than 50 years, one of the towering figures of the Labour Left. Someone, in short, called Hilary Benn.

That Benn the Younger had made a point of telling his constituents that he was “a Benn – not a Bennite”, and had been an enthusiastic supporter of Tony Blair’s “New Labour” from Day One, serving in the Cabinets of both Blair and Gordon Brown, well, that only made it all the more delicious.

Not that the Blairites will be celebrating too loudly. The more intelligent among them understand that Corbyn has shoved “Overton’s Window” decisively to the left. Indeed, when History assesses the (now almost certainly brief) leadership of Corbyn, breaking the neoliberal stranglehold on the British Labour Party will be cited as his greatest achievement. If Benn wants to be Prime Minister he will have to run on a clear anti-austerity platform and to offer the voters policies that are recognisably social-democratic in tone, content and purpose.

But if Paris, as Henry of Navarre is said to have quipped “is worth a mass”, Number 10 Downing Street is worth the renationalisation of British railways and a sharply more progressive tax system. Hilary Benn has only to signal to Labour’s rank-and-file that Corbyn’s vision (minus the pacifism and all that baggage from the 1980s) is safe in his hands, and the incumbent’s already difficult position will become impossible.

As the Andrew Finney character (played by Ian McShane) says in the TV series Ray Donovan: “If you see a man getting ready to take on the world – bet on the world.” After weeks of relentless media and political assault (not least from his own side) even Corbyn’s staunchest supporters know, deep in their hearts, that the British Establishment is never going to allow their hero to become Prime Minister. One way or the other, Corbyn is going to be driven from the Labour Leadership.

But the United Kingdom is an old and devious state, and both its public and not-so-public protectors know that if they are seen to have taken out one Labour Leader, then it is not in their interest to be seen putting too many restrictions on his replacement. In return for Trident, the “Special Relationship” with the USA, and a light hand when it comes to reforming the financial system (i.e. The City of London), the Left will be given their moment in the sun. The protectors of Britain’s Deep State understand that the Westminster System requires two parties of more-or-less equal strength if it’s to go on working. Allow that myth to fail, and who knows what the long-suffering British people might replace it with?

The King is dead (or soon will be). Long live the King!