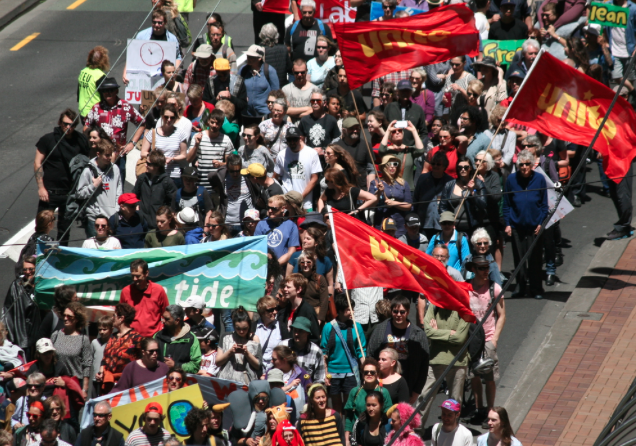 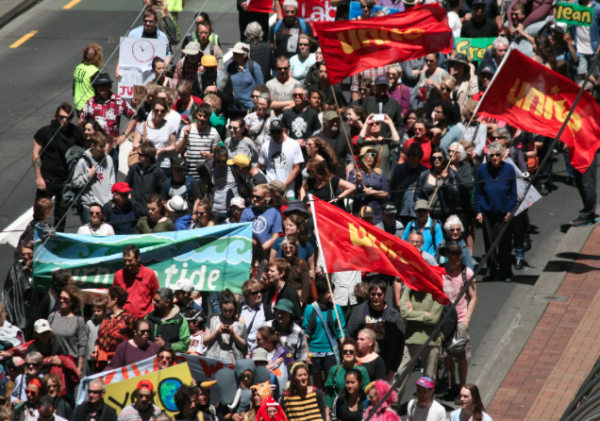 Unite Union adopted a position on climate justice at its annual conference last week in Auckland. Many Unite members participated in the national protests for climate justice over the weekend.

The scientific, economic, social and environmental reasons for doing so were discussed by me in a blog two years ago. This was just prior to an international climate conference similar to this years Paris COP21 gathering. The title signifies the 21st Conference of the Parties.

The terror attacks in Paris has been used to ban public gatherings and French police pre-emptively arrested and detained hundreds of climate activists. As a consequence the democratic input from civil society will be drastically curtailed.

I argued that capitalism was an enemy of mother earth and working people and that system change was a precondition for effective action against climate change. I pointed out that little had been done by the rulers of all the wealthy capitalist countries because they were servants of the system creating the problem.

Little has changed the last few years except for the evidence of global warming and associated catastrophes becoming clearer than ever before.

Our own Prime Minister John Key unapologetically says New Zealand  “doesn’t need to be and shouldn’t be a leader in climate change”. He was awarded a “Fossil of the Day” award by Climate Action Network International for the stupidity of his contribution to the conference.

Unite Organiser Gary Cranston will also be attending the climate change negotiations in Paris this week and next as part of an international union delegation.
The remit to officially adopt a climate justice policy was put forward at Unite Union’s annual conference which wrapped up Friday last week. Unite organiser and now climate justice spokesperson Gary Cranston put the remit to delegates who voted overwhelmingly to adopt it. Gary is travelling to the international UN climate change negotiations in Paris with official observer status with the International Trade Union Confederation (ITUC). 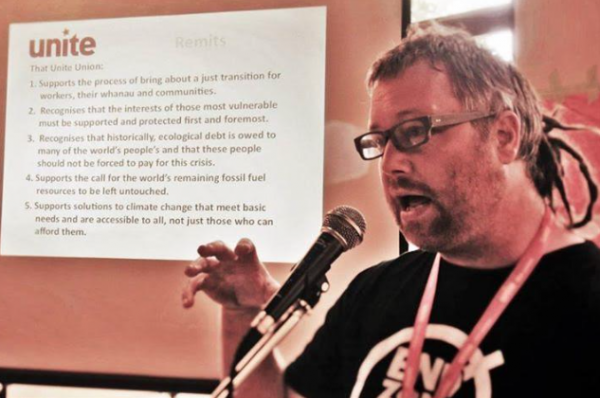 The ITUC recently put a similar set of demands to the French President François Hollande ahead of the global climate summit, demanding a just (fair) transition for all workers to a low carbon and more socially equitable economy. The need to ensure that this transition puts the needs of the world’s most vulnerable people first and foremost was a key inclusion.

Unite union represents an incredibly diverse range of people from all sorts of backgrounds. We have many members from low-lying Pacific island nations threatened by rising sea levels. We have members from the Philippines whose homelands are being smashed by typhoons on a regular basis. We have of course lots of members who identify as Tangata Whenua, whose land and sea are being opened up for deep sea oil drilling and fracking here in Aotearoa. Many of our members are the world’s least responsible for causing climate change yet are the ones who are being impacted the most.

Beyond the more obvious connections with the issue, by developing and adopting this policy Unite Union is recognising that it is low-income earners who are the least resilient to economic, energy and weather-related shocks that are coming down the line. As do union members and activists in other parts of the globe such as the Fight for $15 movement in the U.S. who marched in New York this year alongside climate justice activists drawing connections between sustainable ecological and economic practices chanting “living wage and a livable planet”.

We hope to see more of New Zealand’s unions developing positions on climate change, particularly unions representing workers in extractive industries like coal mining and petroleum processing. This way these workers can have a voice in this inevitable transition that is coming with the needs of their families and communities front and centre.

Unite union stands with all these workers and everyone on the front line of both environmental and workplace injustice in calling for a just transition to a sustainable and more economically and politically equitable world. At the end of the day, this all part of the same struggle.

Gary will be updating us at www.unite.org.nz/unite_news and www.climatejusticeaotearoa.org
Gary will be interviewing and writing on happenings both inside and outside of the conference centre and can be contacted at gary@unite.org.nz for comment and media interest while attending the conference