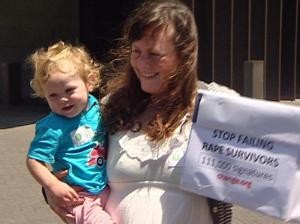 Around two years ago I submitted your petition – a petition signed by 111,000 New Zealanders – to parliament. We spoke up strongly together on the streets and through our signatures against rape culture, the government’s inaction on rape, and the violence of the Roastbusters.

Over that period I have had ongoing contact with government services and the conversation has continued to this very day. Today I met with the Social Services Select Committee to discuss this further. I was told by people – not just left-wing people but right and centre-right people as well – that my submissions were an important aspect of this process and that they cared about these issues.

The Committee are considering the establishment of specialised sexual violence services, in particular for communities that are geographically remote, or groups that are isolated for cultural reasons (i.e. indigenous groups, migrant populations and gender minorities).

This is what I told the committee. I hope I have represented you well:

“People are more afraid of being called rapists than raping.

And from what I’ve seen this is because we let patriarchy control the narrative:

This is from Cameron Slater’s blog yesterday on Tania Billingsley and I think it accurately expresses what I mean:

“When people, women, try to destroy other people, men, by using the most feared weapon of all: that of being part of or supportive of sexual crimes in any way, that’s almost as bad as the real thing. Reason is lost, hysteria replaces it, and the only outcome is damage to both sides.”

This is a pretty devious and malicious quote and no kind or reasonable person would suggest that talking about rape with transparency is anywhere near as bad as rape. It supports the myth of false accusations. You would be right to get angry about it, but it offers us some insight.

What we need to do is actually support and enhance the idea that community-based responses are a good way to deal with sexual violence conflicts, and that community solutions are a safe and pragmatic method of dealing with these issues, not just for survivors and families but also the (typically) men in the community who have done wrong as well. That it is OK and right to participate in community solutions.

This means having strongly established people in each community dedicated to dealing with sexual violence, people who are educated on the social restrictions that inhibit participation and most importantly that these groups are well-funded enough to advocate powerfully at the local level and break down those social barriers to restorative justice through community projects. This means having police working in relationship with these community-based groups and offering restoration as an option in the early stages of sexual violence reporting.

(I included in my submission here a specific example that I recently witnessed in which a person I know disclosed information about the rape they experienced by a former partner. When this was revealed the broader social group moved together with severe hostility to protect his reputation above all other considerations. This resulted in the terrible online abuse of the survivor and ultimately the only consequence for this male was the positive reinforcement of his social relationships. By the time restoration was offered, the survivor was so further traumatised they felt the suggestion was not in good faith and that they had no support.)

This is our current social habit, and we need to challenge this.

So the first step is to recognise this then establish community groups that work to advocate for culture change. If they have the money that will allow them to construct their own culturally-appropriate and creative ways of communicating with their own people. This is especially important for indigenous and migrant communities and gender minorities who need their own voice.

This requires rape-literacy, not ambulance at the bottom of the cliff strategies (only crisis support):

What I personally wanted as a survivor was to communicate:

– You are not to do this again
– Those around you know what occurred. It had a consequence to me. You need to acknowledge the harm caused and demonstrate that you have learned.
– Your actions had severe consequences for my physical and mental health.”

I was asked by a committee member “But won’t this let rapists think they can get away with anything and avoid jail?” And I said that I didn’t have all the solutions but that currently rapists were having what is effectively no consequences at all and that often survivors were experiencing a pile-on of social violence. I also spoke about how social violence and isolation can have severe impacts upon a person’s health, and that allowing people to creatively work in a new community-based direction to bring their own solutions to the table was the most important first step.

If you signed the petition I want to thank you and urge you to taking action on this issue. It matters.