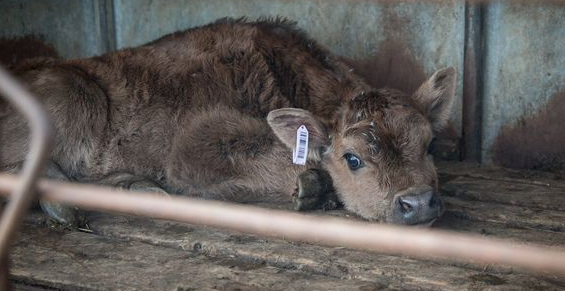 ‘We saw calves torn from mothers’ – shocking video exposes dairy industry cruelty
The man who exposed calves being cruelly mistreated on dairy farms said he was tipped off by concerned farmers and rural community members.

Farmwatch investigator John Darroch said he saw deliberately cruel treatment of calves at about 15 of the 50 farms he secretly filmed across the Waikato.

“We saw calves being torn from their mothers and left in the hot sun for hour after hour, thrown into trucks and then beaten to death,” he said.

Secret video recordings also showed bobby calves being kicked and thrown about at a slaughterhouse.

Between eight and 10 transport companies were filmed transporting calves — and all treated them in a cruel manner, Mr Darroch said.

I despise animal cruelty. I’ve never understood how some human beings seem to enjoy the torment, torture or hurting of animals before. I’m not an ‘animal person’ in any sense, I don’t have any pets, I grew up on a farm and I only eat organic free range meat – but the needless cruelty of animals disgusts me.

But so does faux outrage.

The story of people being abusive to bobby calves seems to drip with hypocrisy and faux outrage. People do understand what those calves are doing at a slaughterhouse right? They are about to be killed. They’re not there on a holiday and the human beings who have to feed the grinder of the abattoir have to emotionally be pretty brutal don’t they? They can’t see the calves as sentient beings, with feelings and fears, they have to see them as objects for abuse, how else emotionally are they going to slaughter so many new born calves every day?

Imagine that’s your job, what is most likely to happen? That you numb yourself to the slaughter and see the calves as objects or are you going to nurture and cuddle them as they are walked into the killing line of the slaughterhouse?

If NZers actually care about this then we will all be prepared to pay more money for the animals and workers who kill them to be given more support and safer conditions and personally consider either going full vegetarian/vegan, buying only organic meat or cutting down on our meat consumption all together.

It’s easy to scream at workers who emotionally numb themselves to killing animals, changing the system it is far more difficult.