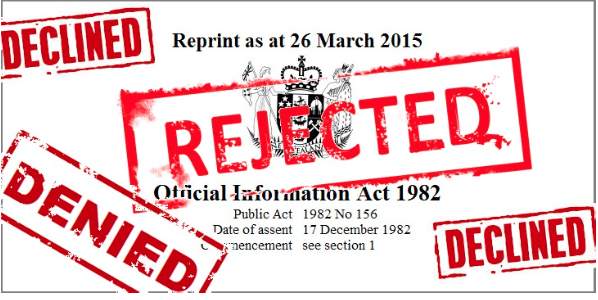 A formal complaint has been laid with the Ombudsman’s Office after Education Minister, Hekia Parata, failed to comply with the Official Information Act.

A OIA request was lodged with the Minister’s Office by this blogger, seeking details of National’s Food In Schools programme, which was announced in May 2013. The limited programme, costed at $9.5 million, offered low decile 1-4 schools free milk and Weet-Bix throughout the school week. It would be run in conjunction with Fonterra, Sanitarium and children’s charity KidsCan.

More critically for National, the expanded “Kick Start” breakfast programme was promoted to directly counter Hone Harawira’s more comprehensive Education (Breakfast and Lunch Programmes in Schools) Amendment Bill which at the time was rapidly gaining traction throughout the country.

“It’s a pretty simple bill really. Invest in making sure the 80,000 kids going to school hungry each week are fed and ready to learn and realise the benefits in better educated and healthier school leavers down the track”.

In Parliament, Harawira was clear on the benefits of his Food in Schools Bill;

It is nice to know that KidsCan feeds some 10,000 of them on most days, and that the KickStart Breakfast programme feeds about 12,000 a day, but the reality is that even with the Government’s announcement in last year’s Budget, nearly 80,000 children are still going to school hungry in Aotearoa every single day. Yes, schools around the country have started their own breakfast clubs with support from teachers, students, parents, local businesses, and the wider community, but they tell us that it takes a lot of hard work and a lot of goodwill to keep them going, and that having secure funding would be a godsend.

The really embarrassing thing is that nearly every country in the OECD, apart from us, already runs programmes to feed kids at school. Some countries like Finland and Sweden provide fully State-funded meals to every school student as part of a wider framework of child well-being. It is a commitment that sees them regularly top the international surveys in child health and educational achievement. Some countries provide free meals to kids with parents on low incomes, and others provide free meals to schools in areas of high deprivation. But although the approaches differ, they all share the same view, backed up by the same kind of research and information from teachers, doctors, nurses, and policy analysts that is available to us here: kids need a good feed every day if they are to develop into healthy and well-educated adults. New Zealand really needs to join the rest of the enlightened world and make a commitment to feeding our kids, starting with those in greatest need, to help them to grow well and learn well.

Harawira’s Bill was estimated to cost upwards of $100 million.

This contrasts with the  Children Commissioner’s Expert Advisory Group on Solutions to Child Poverty, which reported in December 2012 that the total economic costs of child poverty ranged up to $8 billion;

Currently, the economic costs of child poverty are in the range of $6-8 billion per year
and considerable sums of public money are spent annually on remedial interventions. Failure
to alleviate child poverty now will damage the nation’s long-term prosperity. It will also
undermine the achievement of other important policy priorities, such as reducing child abuse,
lifting educational attainment and improving skill levels.

In December 2012 the Expert Advisory Group on solutions to Child Poverty – a group comprising policy, public health and law experts – recommended that a food programme starting with decile 1-to-4 primary and intermediate schools, be implemented as one of their six initial priorities for immediate release.

Dennis McKinlay, Chairman of ‘Every Child Counts‘,  stated that 169 countries had a food in schools programme.

Shockingly, the Bill was eventually defeated in a Parliamentary vote of 61 votes to 59, with ACT and Peter Dunne also voting against it. The New Zealand government spends billions on school infra-structure, but not to feed hungry school-children from poverty-stricken families.

On 27 October, this blogger lodged a OIA request with Education minister, Hekia Parata. The request sought answers to the following;

3. How many schools are part of the programme?

5. Are there any figures as to how many children are participating in the programme? If so, what is that data?

6. Is there a time limit as to the length of time a school can participate in the programme?

7. Have any schools been declined participation in the programme? How many? For what reason?

8. Are Sanitarium and dairy cooperative Fonterra still participating in the programme? Have any other companies joined in?

9. Does the KickStart programme in any way affect a schools allocated budget?

10. Have any Charter Schools requested to join the programme? If so, how does this affect their funding?

By 12 November, after no response or even an acknowledgement, this blogger wrote again to Minister Parata;

On 27 October, I lodged this OIA request with your office. I have recieved no reply or even an acknowledgement.

Please advice whether or not you intend to respond to my OIA request. If not, I will proceed by laying a complaint with the Ombudsman’s Office.

As at 29 November, no response had been forthcoming from the Minister’s office, and a complaint was laid with the Ombudsman’s Office. As this blogger pointer out in the complaint;

I do not believe it is satisfactory that a Minister of the Crown wilfully ignores the law and fails to follow her obligations under the Official Information Act.

Readers of The Daily Blog will be kept updated as this issue progresses.

Parata has apparently “gone to ground” on this issue. It is not the first time she failed failed to respond to media enquiries; requests for interviews; or fronted at events for which she has direct responsibility.

“I actually think she’s a very effective communicator; in fact if you look at her history in politics, she’s been one of the smoothest communicators we’ve actually had.” – John Key, 18 January 2013

Prime Minister John Key says Education Minister Hekia Parata will be safe in an upcoming Cabinet reshuffle, … because she is hugely talented and one of National’s best communicators.

I’d be a happy chappy if the Nats DID have more like her in Cabinet!!

If she’s one of the Nat’s “best communicators”, I’d luv to know why she’s kept ducking calls for media interviews and instead sent Lesley Longstone to cover for Parata’s f**k-ups,

Parata is currently on holiday and has refused to front on Longstone’s resignation, but in a statement released this afternoon she thanked Longstone for her efforts in leading the Ministry.

Hmmmm, judging by Parata not fronting for most of last year, was she on holiday for most of 2012?!

In January 2013, Hekia Parata’s responsibilities surrounding Novopay were transferred to Minister For Everything, Steven Joyce. Joyce was not above publicly denouncing those responsible for the Novopay debacle;

Radio NZ: Food in schools ‘could get good results’

ODT: Joyce to take on handling of Novopay