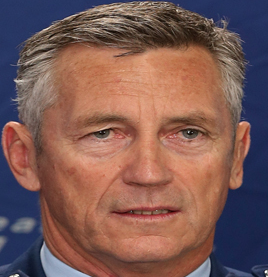 The Dead Eyes of Justice

Perhaps it’s because NZ has no properly funded public space to debate these issues or perhaps it’s because no one watches The Nation on TV3, but where else in the world could the Police Commissioner admit on television that Police are ‘unconsciously’ biased  and nothing happens?

Mr Bush told Lisa Owen on TV3’s The Nation that he has taken action at the executive level to counter an unconscious bias which contributes to disproportionate numbers of Maori being apprehended and prosecuted.

He says the bias has come to light in data collected on when police use their discretion with offenders.

He says not just Mr Bush but the Minister for Police needs to make sure everything possible is done to end racial bias in the police force.

Mr Davis says a fair and unbiased police force is a vital part of the justice system.

She says the high levels of Maori in the criminal justice system is something police have been working on with iwi for a while with the Turning the Tide strategy, which has won praise from United Nations.

…this racism – or as the Police Commissioner puts it ‘unconscious bias’ – has been found deep inside Police research which helps explain the Police attitude to blacklisting academics who might highlight these types of injustices.

Acknowledging a police force is racist – cough – ‘unconsciously biased’ – is a great start but seeing as the Police were recently caught out manipulating crime stats, insensitive handling of sexual assault allegations, framing innocent people for crimes and breaking the law, hoping they go further is about all we are left with under this Government.