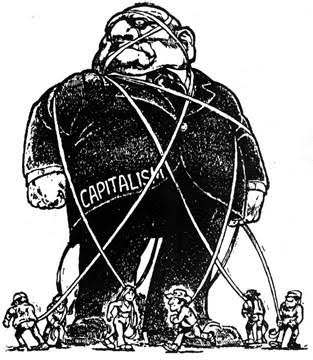 THE IDEA that the Left can do nothing right is central to the Right’s world view. In terms of both competency and morality, leftists are held to be irremediably deficient. All evidence contradicting this proposition is either ignored or denied. But any claim, no matter how absurd, which confirms the Right’s view of the Left’s deficiencies, immediately becomes holy writ. It’s as if even the slightest suggestion that the Right might be wrong has the power, once accepted, to unravel our entire understanding of the world.

This hyper-sensitivity to left-wing judgement is entirely understandable. What differentiates the Left from the Right is the former’s fundamental rejection of the strongest human-beings’ ability to dominate, coerce and exploit the weakest. But, without this ability, none of the economic and social systems elaborated by armed minorities throughout history could have endured. Not the empires of the ancient world; not the feudal structures of the middle ages; and certainly not the capitalist system of the modern era. All of these civilisations were built on the ruthless exploitation of the weak by the strong – exploitation enforced by extreme and unreproved violence.

As it was, so it is still. Strip away all the piety, mythology and outright lies about our present, capitalist, civilisation and you will find, at its core, the domination, coercion and exploitation that its political guardians, the Right, recognise as its true essence, and will defend – to the death.

One of the Right’s most important misunderstandings of the Left is that it can, somehow, embrace domination, coercion and exploitation – and remain the Left. Notwithstanding its logical absurdity, it is the condemnation one hears most often from the Right: that the Left, in the shape of the Communist Party of the Soviet Union, or the Communist Party of China, is responsible for upwards of 100 million deaths.

They forget, of course, that the vast majority of those killed were individuals who refused to accept the right of either of these parties to impose their will on the people in whose name they had accomplished the overthrow of the old oppressors. Whether it be the rebellious Russian sailors at Kronstadt in 1921, or workers and peasants across the whole of China from 1949 to the present day, whoever, in the name of justice and equity, takes a stand against an oppressive system of domination, coercion and exploitation is, by definition, a leftist.

Though the Right’s inability to properly understand this simple truth is astonishing, it is hardly surprising. If they were not able to convince themselves that the Left is an irredeemably evil political phenomenon, driven by greed and envy to confiscate the hard-earned wealth of all who are superior to their neighbours in intelligence, enterprise and skill, then the Right would have to face the true character of the system it has created, operates and defends.

That would mean casting its eyes back over history and calculating the human and environmental damage it has done. Even if this exercise is limited to the capitalist era, the results are damning. The slave trade that built the fortunes of so many of Britain’s leading capitalist families. The depredations of the East India Company, whose rapacious pursuit of profit ravaged the entire Indian sub-continent. The opium trade to China, which, under the protection of the British navy, addicted millions. The list could be extended indefinitely for each of the great capitalist powers, and the death toll laboriously calculated, but it would still be short. Because it would not include the untold millions of lives blighted and shortened by years of economic exploitation and neglect. Capitalism kills. It has done so from its earliest beginnings, and it does so still. The only distinction between the history of capitalism and the history of the Mexican drug cartels, is that the cartels have never pretended to be advancing the progress of humankind.

Oh, how the Right will bridle at that last sentence! How loudly they’ll protest that capitalism has lifted millions – no, billions! – out of poverty. That it was capitalism which boosted incomes, upgraded housing, delivered improved health and education, and generally uplifted and prolonged the lives of the masses.

Poor creatures. They have to believe this. Because not to believe it: not to be absolutely certain that it was the system that sent gun-thugs to break-up strikes; adulterated food; presided over slums; polluted whole regions; and sent entire nations off to war; was (and is) the sole source of all that is wholesome and good in the world, raises the awful possibility that something, or someone, else is responsible for making life under capitalism just that little bit happier and more fulfilling for humankind.

And who could that possibly be? Surely not the trade unionists, who forced up workers’ wages? Or the social reformers, scientists and doctors, who discovered how to ward off illness and disease? Or the progressive architects and city planners, who designed cheap and sturdy housing for the poor? Or the progressive, social-democratic and labour parties, who gathered together all the agents of economic and social progress, won state power, and fastened a strong regulatory collar around the capitalist beast?

Surely, it wasn’t – no, no, it couldn’t possibly have been – the Left?