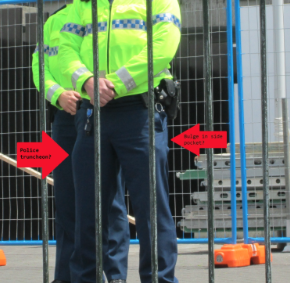 “Policing” was effectively left up to March Marshalls who controlled traffic and supervised protesters as they made their way through Wellington’s CBD, to Parliament.

As I also reported, a msm journalist present noted the lack of police presence, expressing his surprise and nervousness.

However, at  Parliament’s grounds, there was no lack of police presence. At least twentytwo policemen and women lined up in front of the old Parliament Building.

The building was not only empty on a Saturday afternoon, but the entrance had been boarded up due to refurbishment activity.

It was apparent that police had positioned themselves on the Parliamentary forecourt waiting for protesters to arrive, and in the process had forgotten another of their primary duties; traffic management and escorting the protest march through Wellington’s narrow streets.

Fortunately, the March Marshalls achieved a good result in both areas.

But there was another curious aspect to the policemen and women on Parliament’s forecourts.

On a previous anti-TPPA march in Wellington, on 15 August, protesters were ‘greeted’ with police wearing tasers on their belts;

Last Saturday’s (14 November) police did not appear to be displaying tasers.

But – were they armed with tasers concealed in their pockets?

These images were taken on the day, and appear to show bulges in their pockets  that do not appear in the above images, or similar images taken three months ago;

For a better comparison;

Following the 15 August anti-TPPA march and the open display of tasers, there was some public disquiet at police carrying these weapons to a political protest.

On this occassion,  someone within the Police hierarchy may have made an unfortunate ‘call’ to have their officers carry concealed tasers.

There is no clear evidence to prove this assertion one way or another. The bulges may have been hankies stuffed deep into trouser pockets (quite a few hankies, judging by the bulges).

But if true, it may be appropriate for an urgent  “Please Explain” between the Minister’s and Commissioner’s offices.