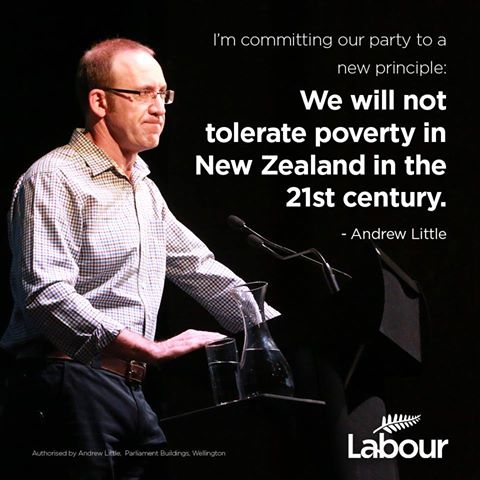 IF ELECTIONS COULD BE WON with a single speech, Andrew Little would be a shoe-in for New Zealand’s next prime-minister. Sunday’s keynote address to the Labour Party faithful in Palmerston North has been acknowledged, even by Little’s critics, as an outstanding rhetorical success. Certainly, its astute combination of the personal, the political, the traditional and the inspirational had the 1,500-strong audience in the city’s Regent Theatre on their feet and cheering.

This rapturous reception of Little’s speech notwithstanding, most observers agree that the 500 delegates who turned up to Labour’s 99th Conference were a thoroughly chastened bunch. The open and bitter confrontations between ordinary members and MPs that had become such a feature of recent conferences were nowhere in evidence. Indeed, top-down appeals for unity, focus and discipline, and warnings against doing anything that might embarrass the party, found an unusually compliant audience. Between them, Labour’s President, Professor Nigel Haworth, and Little’s staffers, Matt McCarten, Neale Jones and Sarah Stuart, managed to create an atmosphere in which the professional politicians were heeded – not heckled.

This appeal for unity worked because, for the past twelve months, the parliamentary caucus has demonstrated its capacity for working together as a team. The unauthorised leaks to gallery journalists and bloggers; the secret briefings against colleagues; all the disloyalties that helped to destroy the prime-ministerial hopes of Phil Goff, David Shearer and David Cunliffe, have largely ceased. And what’s sauce for the caucus geese, Haworth told the delegates, must now become sauce for the activist ganders. It was time for Labour to decide what it was: “a jolly decent loose confederation of like-minded individuals and organisations”, or, “a united, disciplined party”. From The Daily Blog’s Martyn Bradbury, to POLITIKS’ Richard Harmon, the journalists in attendance agreed that the delegates had opted enthusiastically for the latter option.

Little’s task now is to use that united and disciplined party to sell Labour’s message to the wider electorate. And, unfortunately, it’s about here that the organisation and efficiency run out. Having set himself and his party some big, inspirational goals: “Jobs, jobs, jobs”; the elimination of child poverty; properly resourcing the health and education systems; Little has next to nothing in the way of credible answers to the questions that inevitably follow such bold political statements of intent.

Rather than answer, simply, “Yes”, when RNZ’s Guyon Espiner asked whether it was now Labour’s policy to eradicate poverty, Little prevaricated. Labour’s policies will be rolled out over the next two years, he said. Not good enough. Intelligent voters know that eradicating poverty necessarily entails lifting the incomes of the poor. Does Labour intend to restore the purchasing power of welfare benefits to 1991 levels – thereby reversing Ruth Richardson’s 25-30 percent cuts in beneficiary incomes? If so, where will the money come from? Does Labour intend to increase the top tax rate? And if Labour has no plans to reverse Richardson’s benefit cuts, or raise taxes, how can it possibly be serious about eradicating poverty?

The general journalistic consensus is that Labour’s strategists are attempting to emulate the highly successful, Crosby-Textor-guided, National Party campaign of 2008. This entails shedding all the policies that the punters don’t like or can’t understand (Capital Gains Tax, raising the retirement age, NZ Power) and holding back on announcing any new policies until much closer to the General Election.

But this is a thoroughly inaccurate reading of National’s 2007-2008 strategy. What the voters feared most about National in 2006 was the radical and divisive agenda Dr Don Brash had persuaded it to adopt in 2005. John Key’s priority, therefore, was to allay the voters’ fears by ditching the Brash agenda and keeping in place most of Labour’s more important economic and social reforms (Working For Families, Interest-Free Student Loans, Kiwisaver). He also gave practical expression to this change of National’s heart by visiting McGeehan Close and promising to address the problems of the underclass, and by cutting adrift the far-right opponents of Sue Bradford’s anti-smacking legislation. Far from being a do-nothing Opposition leader, Key worked constantly to build-up the image of a new kind of National Party: one committed to giving New Zealand a “kinder, gentler” version of conservatism.

The most important piece of advice Lynton Crosby gives to his right-wing clients is: “When in doubt, stand for something!” The people around Little should be saying exactly the same thing. Indeed, they’ve already said it – in Sunday’s speech. Little has declared Labour’s intention of re-claiming the New Zealand Dream: the dream that past Labour leaders and governments fought to bring within the reach of every Kiwi family. His No. 1 priority over the next two years must be to show New Zealanders how he and his party intend to bring that dream into the twenty-first century; and to refute the inevitable arguments hurled against it by Labour’s political foes.

Equivocation cannot do that. Inoculation cannot do that. Turning yourself into the smallest possible target for a hostile news media cannot do that. When Sid Holland declared, in 1937, that Labour’s Social Security Bill was “applied lunacy”, Mickey Savage responded by saying that he thought of it as “applied Christianity”. The nation cheered. More recently, when asked why he had made sure that half of his new cabinet were women, Canada’s Justin Trudeau replied: “Because it’s 2015.” A party of change must carry the country with it to defeat the forces of conservatism. Rather than rely upon the dark arts of Crosby-Textor, Andrew Little should put his faith in the sentiments that brought the Regent Theatre to its feet on Sunday afternoon.