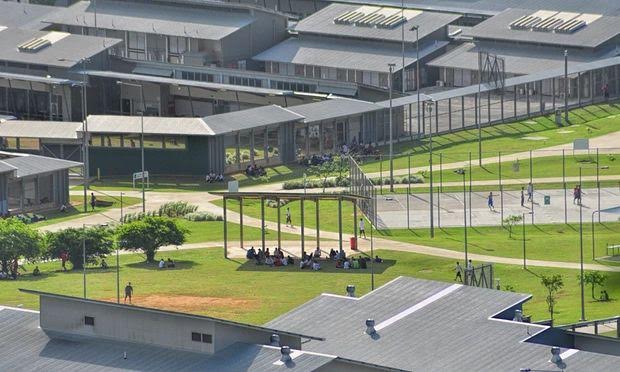 Transcript of a Radio NZ interview November 9, 2015, with a Kiwi prisoner on Christmas Island, an Australian Immigration detention centre, after prisoners seized control of the facility following the death of an Iranian refugee.

Protests need to be organised in Australia and New Zealand to stop a bloodbath against prisoners simply asserting their humanity.

Good, now tell us what’s going on with you. What’s happening right now?

Basically the detainees have taken control of the detention centre and we’re sort of just waiting for a response. We don’t know what’s going to happen next and it’s not like we’ve got anywhere to go so we’ve kind of just made our own little home on the island, I guess. Been waiting for the reaction of the immigration and border force to do what they have to do.

The staff have disappeared, we haven’t seen them probably for the last four hours, five hours. I don’t think they have the capacity to deal with this situation at the moment, so they’re probably calling in more recruits to just come in and defuse the situation or maybe we might have a negotiation, we don’t really know. We’re just waiting.

Okay, so what actually happened? What was the reason to kick all of this off?

Well, mainly it was the death of the detainee today and basically we’re just sick of having people, you know, you see it all the time, people are trying to hurt themselves, trying to kill themselves. A lot of self harm, and it’s not nice to watch, you really feel for these people. I’m pretty sure everyone’s contemplated that sort of way to go themselves, but we’re just trying to save something for our families, I guess. And this recent death has just pushed everyone a bit too far.

What actually happened? How violent was it? I believe the fence was torn down and the detainees took over.

Yeah, fences have been torn down. It started off with people trying to get out of the compound, because a lot of them went back into the compound without realising what was happening, and then when it all started, the emergency response team were in the compound, and all of the detainees went down to that compound and were screaming through the fence “leave the detainees alone”.

In the end, the emergency response team backed off and went back into the hallway. We were just trying to get them all out of there, and the guys who were locked inside kicked through the wall and through the corrugated iron outside of the wall and basically once one compound succeeded in doing that, the rest of the compounds followed suit. And then we all banded together and got all the segregation guys out as well, because it’s pretty bad up there, these boys have been pretty badly abused and tortured in a lot of cases, so we’ve gotten all of them out and then it went through canteen and then it went through property and medical and then it’s all gotten pretty out of hand.

Have fires been lit?

Yeah, there have been fires lit. There were fires lit at the start of the riot, just around the sports area and now I was just told that the canteen was set on fire and the properties office. This place is pretty much uninhabitable now, they can’t really keep us here, they can’t lock us in, so we’re guessing they’re going to have to move us back to the mainland because it’s no longer operational.

But the guards will be coming back, it’s nighttime at the moment. What do you think is going to happen next?

We’re not sure, we’re just sort of waiting for that response, basically. We have a feeling that they’re going to send a lot of guards in, a lot of the detainees have armed up, we’ve got baseball bats and poles and everything ready just in case, because these guys are pretty bad. They don’t hold back, if they come in here they’re gonna hurt us without a doubt. We’re not thinking that they won’t, we know 100% that they’re gonna come in and try to hurt us, so we’re just sick of it. It’s abuse, it’s torture, it’s time that we took a stand.

Has anyone been hurt so far?

So far, no. One of the guys that has self-harmed in the past couple of weeks ended up a bit bloody, but his reaction was the same as the day that he did that to himself because these guys don’t care, there is no duty of care. They’re more worried about themselves than they’re worried about any duty of care for us. We don’t even get treated this bad in jail. It’s an abomination, it’s just utter chaos. I don’t see how a government could possibly be supporting this kind of action in this day and age. I don’t understand how they could’ve even enforced this policy in the first place. It’s political racism, that’s what it is. It’s pretty hard to deny that, yet they do.

Considering you’re saying a lot of people have armed themselves, that they’re ready for the guards when they come back, do you think this is going to be a fight when it happens?

Most likely, yes. That’d be the most likely outcome, I think at this point. It’d be nice if there was some sort of diplomatic solution, maybe even some sort of negotiation but they have tried to resolve situations like that in the past. Detainees have gotten off a lot lighter than they would if they had have just given in. In saying that, we end up with better results if we fight than if we don’t.