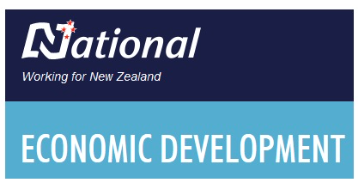 Leg #1: Treasury reported in 2012, on the Christchurch re-build;

The Canterbury rebuild is expected to be a significant driver of economic growth over the next five to ten years. The timing and speed of the rebuild is uncertain, in part due to ongoing aftershocks, but the New Zealand Treasury expects it to commence around mid-to-late 2012.

The New Zealand dairy industry is experiencing prosperous times, continuing the strong growth in export earnings of the past eight years. Animal numbers and prices have increased and on and off farm productivity growth has been impressive.  And the future looks bright. There seem to be important structural reasons behind the rise in dairy prices that should continue into the medium term.

“Closer to home, the Reserve Bank … highlights several factors continuing to support growth domestically, including robust tourism, immigration, the large pipeline of construction activity in Auckland, and, importantly, the lower interest rates and the depreciation of the New Zealand dollar.”

There we have it – the three basic “legs” comprising National’s economic development policy. One is predicated on fluctuating international market-prices; another is an unsustainable property boom funded by billions borrowed from off-shore; and the other is the epitomy of ‘disaster’ capitalism.

In debating the fragility and unsustainability of these three sectors of our economy, I (and other bloggers from the Left) have pointed out time and again the transitory nature of the dairy sector boom; the Christchurch re-build boom; and the Auckland property market boom. Acolytes of the so-called free-market – ever dedicated to their quasi-religious right-wing notions – have dismissed our warnings.

On 4 November, the National government’s Finance Minister and sheep farmer, Bill English, made a statement in Parliament that has backed up our dire warnings – albeit somewhat late in the day;

“Of course, if unemployment was a direct choice of the Prime Minister of New Zealand, there would be none of it. You would just decide to have none. But, of course, it is not. It is a product of the world economy and its low growth rates, and of particular circumstances in New Zealand where the rebuild in Christchurch has flattened out and there has been a drop in national income of billions of dollars from the decrease in dairy prices, which was always going to affect the number of jobs in New Zealand, and now it is happening.”

Indeed; “and now it is happening”.

Two of National’s economic stimulators are either belly-up, or in the process of falling flat.

Only the Auckland housing boom remains. When that collapses, it will be much, much worse than the depressed Dairying sector. At that precise moment, international lenders will have noticed that we have been borrowing-up-large for one helluva massive property splurge-party – and they will be wanting their money back.

New Zealanders are about to wake up with the biggest “hang-over” since they first got trolleyed at teenagers.

Will it matter by then?

Reserve Bank: The significance of dairy to the New Zealand economy

Metro: 10 ideas that could solve the Auckland property crisis

Labour’s collapse in the polls – why?