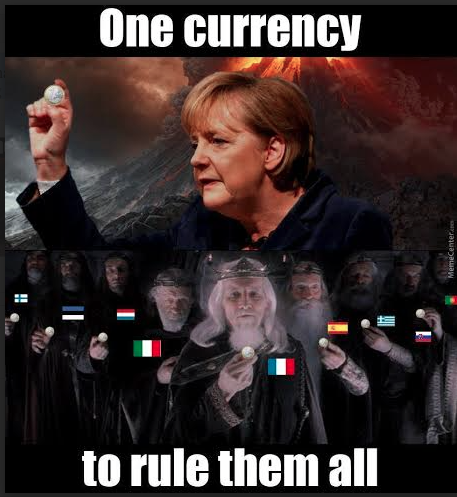 Early yesterday morning, I awoke to the sad spectacle of some seriously curious headlines filling my newsfeed. Chief among them, “Eurozone Crosses Rubicon as Portugal’s Anti-Euro Left Banned from Power“.

So what the Hell’s going on up there?

Portugal recently held an Election. The ruling Portugal Ahead coalition – a right-wing political conglomerate lead by two parties which oxymoronically feature “Social Democrat” in their names despite being nothing of the sort – lost 25 seats, and nearly 12% of Parliament. Sitting on a cool 38.6% of the Portuguese legislature, you’d therefore be forgiven for assuming it wasn’t in a viable position to form a government.

The Portuguese Left, meanwhile, surged ahead – with the Socialist Party, United Democratic Coalition and Left Bloc together capturing an additional 24 seats between them. On 122 seats and 50.8% of the vote, they therefore command the legislature – and seemed an absolute shoe-in to work together to become the next government of Portugal.

But Portuguese President Anibal Cavaco Silva had other ideas.

Claiming that however the chips had fallen on election day, the good people of Portugal *hadn’t* in fact voted for anti-Euro or anti-European Union parties (possibly because a dismally worrying voter turnout of just under 56% meant a majority of Portuguese couldn’t be said to have voted for anything in particular anyway) … Cavaco Silva then went full Emperor Palpatine by effectively suspending democracy in the name of “[preventing] false signals being sent to financial institutions, investors and markets.”

We’ll leave aside the obvious absurdities of Cavaco Silva claiming that the presumptive left-wing government-in-waiting “campaigned to abrogate the Lisbon Treaty, the Fiscal Compact, the Growth and Stability Pact, as well as to dismantle monetary union and take Portugal out of the Euro, in addition to wanting the dissolution of NATO.”

If there’s any substance to those claims, it’s presumably percolating round the bowl of a glass pipe.

Even if he WERE right about half of these claims (and certainly, opposing Austerity does seem to strike at the core of the E.U.’s now incredibly dubious approach to economics as represented by some of the above) …. the fact remains that Portugal, up until recently, was a Democracy.

That means that people vote for Parties on the expectation that those Parties – once in Government – will be afforded the opportunity to put those Policies into Practice. It’s as simple as that.

Having said that, there are some arguable and justified limits upon democratic expression which may necessitate or militate super-national interventions to curtail parties forming governments and putting their ideologies into practice. We generally, as a global community, take a fairly dim view of out-and-out fascist parties getting elected with the stated intention of carrying out the genocide of captive minority populations, for example – unless we’re talking about the Government of Israel.

But that is not this. Here we have a quite legitimate contest of ideas, with questions of economic management and destiny being fairly *core* business of the state, that’s been ruthlessly shut-down and outright over-ruled simply because one key decision-maker (whom, let’s remember, is theoretically answerable to the Portuguese electorate he’s shouting down and subjuncting in the first place) decided it might spook financial traders and byzantine Eurocrats.

There’s a word for this – and regrettably, it’s one Portuguese history is intimately familiar with:

And while it’s unquestionably an unfortunate if not outright reprehensible irony that an organization like the European Union which purports to champion the virtues of Democracy across the continent and around the world … is being used as a spur and lever with which to abrogate that same system of governance in one of its own members, it would be somewhat naive to pretend this was anything other than a sadly systemic pattern when it comes to E.U. member-states doing something Brussels-bound bureaucrats don’t like.

One of my earliest “proper” political memories was the contratemps surrounding the proposed adoption of a “European Constitution” by E.U. member-states in the mid-2000s. This process ground to a seeming halt after France and The Netherlands both rejected the idea in public referendums, yet re-emerged two years later under the guise of the Lisbon Treaty – an instrument designed to accomplish much the same thing, but without the messy encumberances of democratic rubber-stampery required for its enactment as the Constitution would have done.

Something vaguely similar with the Lisbon Treaty took place as well, with the Irish rejecting it in a 2008 referendum which nearly derailed the entire process once more – before being pressured into reversing this position and accepting a slightly watered down version of the agreement some months later in late 2009.

But the best example of the inexorable tension between the super-national Austerity-mongers of the E.U. on the one hand and national sovereignty/democracy on the other, is provided by recent goings-on in Greece.

As we all remember, Alexis Tsipras and his SYRIZA coalition were propelled into Parliamentary power as a sort of great left-wing hope in January of this year. They campaigned on a platform of anti-Austerity and attempting to reach an honourable agreement with Greece’s creditor nations that would also be fair and just for. What followed was an unmitigated exercise in undermining, blackmail, subterfuge, sabotage, and calumny. A coup d’etat by any other name. A frank demonstration that however you chose to slice it, the Eurozone was not to be construed as a ‘partnership of equals’ – still much less a shared project in which the individual welfare and wellbeing of the most disadvantaged economies therein might be considered a pressingly important concern.

Instead, the string-pullers of the Eurozone reacted with outrage: first with saber-rattling about the importance of Greece honouring the unfair obligations which previous governments in a ball-vice had seen fit to sign up to … and then, with an actual and outright attempt to crash the Greek economy as a demonstration of fiscal firepower to try and force the Greeks back into line. Never mind the absolutely catastrophic economic consequences of both this and previous efforts at entrenching the Austerity agenda.

It’s even said that one of the callous threats deployed to bring Greece to heel was a withdrawal of the guarantee of European assistance in case of a Turkish attack (in order to properly understand the magnitude of this, it’s worth considering that the metanarrative of supreme eminence bar none in Greek history for much of the previous three thousand years has been that of the grand sweeping orientalized existential threat from the East) – certainly, the notion that Greek compliance with the Troika’s diktats ensured a “security guarantee” for Greece was fairly openly bandied about in press releases.

Greece went back to the polls a few months later – SYRIZA’s tail between its legs, Tsipras pushing a plaintively pro-Bailout policy package, Varoufakis the Rockstar Economist heading into exile, and European hegemony over the constituent economies which made up its demesne once again unchallenged.

Or so they thought.

The dual and occasionally entwined notions of anti-austerity and fear of the ‘democratic deficit’ represented by present European politics haven’t gone away.

Instead, if anything, they’re more potent and powerful now than they half a decade or a decade ago when these concerns assumed their present prominence. In the Anglosphere context, the UKIP’s surging electoral support is clear evidence of this – as is, more positively, Jeremy Corbyn’s attempted steerage of UK Labour onto a decisively anti-Austerity political agenda.

German Finance Minister and arch-Eurocrat Wolfgang Schaubel might have boldly declared at the height of the Greek crisis that “elections cannot be allowed to change anything” … but as Portugal earlier this month proves, they already are!

It’s anyone’s guess as to how this Portuguese constitutional crisis will play out – whether Cavaco Silva will back down and allow the left-wing parties a shot at government, whether the Portugal Ahead grouping manages to successfully form a minority government, or whether Portugal goes back to the polls (and possibly continues to go back and back to the polls until they deliver a result that’s found to be palatable to the Eurocrats. “The Elections Will Continue, Until The Results Improve”, indeed).

But one thing’s for sure. The mask and veneer of democratic sensibility which had somehow miraculously remained largely intact even despite the Greek crisis and Lisbon shenanigans which preceded it … is peeling off apace.

As much as they might wish to believe otherwise, it’s now impossible for the Eurozone to go back to the politics of easy, quiet consensus.

Oh and finally … the next time somebody starts noisily campaigning for New Zealand to move towards an elected head of state – remember: that’s how Portugal got into this mess in the first place.